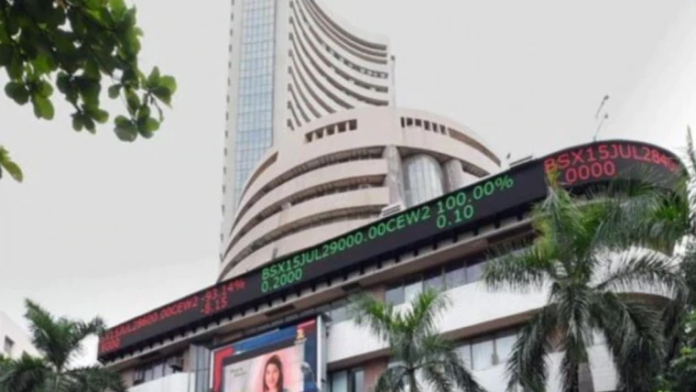 In its fourth bi-monthly policy review, the central bank also reduced its benchmark lending rate by 0.25 percent to revive growth that has hit a six-year low.

After opening nearly 300 points higher, the 30-share index gave up all the gains to turn negative after the policy announcement by the Reserve Bank of India (RBI).

On the other hand, TCS, Infosys, ONGC, Tech Mahindra, IndusInd Bank, and NTPC rose up to 1.03 percent.

Rate-sensitive banking stocks faced the heat, with the BSE bankex, finance, auto and realty indices tanking up to 2.45 percent.

The Reserve Bank on Friday sharply cut its economic growth projection for this fiscal to 6.1 percent from 6.9 percent earlier.

The central bank’s estimates come in the wake of GDP growth sliding to a six-year low of 5 percent in the June quarter, on a massive slowdown in consumption and private sector investments.

Further, the RBI’s Monetary Policy Committee cut its benchmark lending rate by 0.25 percent to revive growth that has hit a six-year low of 5 percent, and affirmed commitment to remain accommodative to address growth concerns ‘as long as necessary’.

“That is because of the RBI’s focus on the quick transmission of lower interest rates would put pressure on margins of banks,” he pointed out.

Also, the economic growth outlook remains concerning despite the 135 bps policy rate cuts in 2019 and there is limited elbow room with RBI now to further take monetary actions to support the economy, he said.

Elsewhere in Asia, Hang Seng and Kospi settled on a negative note, while Nikkei closed in the green. Chinese markets are closed for a holiday.

Equities in Europe were trading lower in early sessions.

Meanwhile, the Indian rupee depreciated 9 paise to 70.97 against the US dollar intra-day.