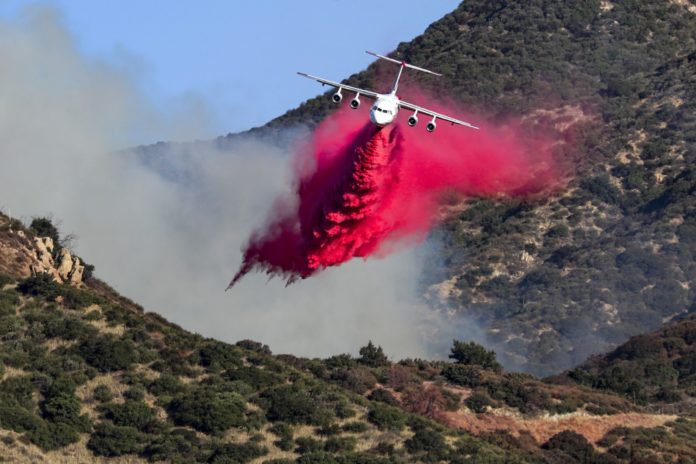 A fast-moving brush fire continued its destructive march into the northern foothills of the San Fernando Valley on Friday, burning at least 25 homes, closing freeways and forcing thousands to flee.

“These weather conditions are significant,” Terrazas said. “You can imagine the embers from the wind have been traveling at significant distances, which cause other fires to start.”

Mandatory evacuations have been issued to roughly 23,000 homes making up a huge swath of neighborhoods north of the 118 Freeway from Tampa Avenue all the way to the Ventura County line — an area covering 100,000 residents.

One firefighter suffered a minor injury to his eye, and a man in his late 50s died after going into cardiac arrest while talking with firefighters early Friday, Terrazas said. Authorities could not confirm reports that the man was trying to fight the fire from his home before he died.

More than 1,000 firefighters from multiple agencies were attacking the blaze Friday from the air and ground. Officials deployed helicopters and amphibious firefighting aircraft known as Super Scoopers, while crews manned bulldozers to cut containment lines into nearby hillsides in an effort to slow the fire’s spread. At least one airtanker blanketed fire retardant across the ridges.

However, unrelenting winds gusting up to 50 mph, low humidity and rising temperatures — which can dry out brush that fuels the fire — put crews at a disadvantage. Officials said they expect it will take days to get the blaze under control.

“Nobody is going home right away,” Terrazas said.

The fire was first reported about 9 p.m. Thursday on the north side of the 210 Freeway, but wind-driven firebrands soared over the 210 and 5 freeways and ignited more dry brush. A 30-acre spot fire broke out west of Balboa Boulevard and pushed westward, officials said.

There are few options for firefighters against a wind-driven fire with a lot to burn, Los Angeles firefighter John Ferrer said.

“Because of the wind-driven factor, it creates a more defensive posture for firefighters,” Ferrer said. “We wait until the wind dies down and can deploy adequate resources to contain the flanks of the fire and an early-morning attack on the fire.”

The blaze moved so quickly that it jumped into neighborhoods overnight before firefighters and police could warn residents.

In Porter Ranch, a man stared as waves of embers crested against a two-story home abutting a hillside on Sheffield Way and flames lapped at the back of the structure.

“That’s my home,” he said. He had gotten out 15 minutes earlier.

Flames had already reached a second home on the cul-de-sac, which was choked with thick gray smoke, punctured only by the high beams of fleeing cars speeding through the small streets that crisscross the hillsides.