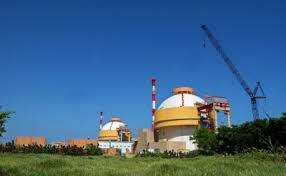 In a statement, Rosatom said the 340-tonne second steam generator has been shipped and will reach Kudankulam in a multi-modal transport traveling about 21,000 km with complex logistics.

“The equipment will reach India using multi-modal transport. From Volgodonsk by road and water transport to Saint-Petersburg port, then by water transport through Baltic and Mediterranean seas, Suez Canal, Red Sea, and the Indian Ocean,” Rosatom said.

In the nuclear power plant, heat is removed from the reactor core by coolant, which passes through the core. This thermal energy is used to produce water steam in the steam generator.

Steam’s mechanical energy is supplied to the turbine generator where it goes into electricity.

The diameter of steam generators is over 4 m, length 15 m, and weighs 340 tonnes. The set of equipment for one power unit of a nuclear power plant of this type includes four steam generators.

Rosatom is the technical consultant and main equipment supplier to the Kudankulam Nuclear Power Project (KNPP), which is being constructed in Tamil Nadu within the scope of the Russian-Indian agreement of 1988 and its attachments dated 1998 and the agreement as of December 08, 2008.

In October 2013, Unit-1 of the KNPP was connected to the southern power grid.

In August 2016, Unit-2 of the KNPP was connected to the power grid.

Currently, Units-3 and 4 are under construction.

The contracts for the construction of Unit-5 and Unit-6 have been signed and the preparatory works are in progress, Rosatom said.