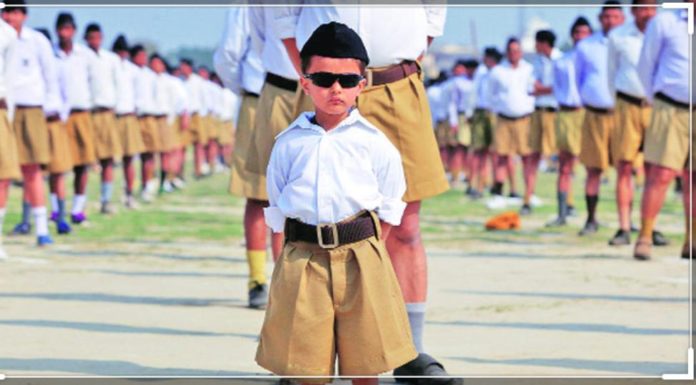 On Tuesday Morning, 8th October Reshambagh grounds has witnessed Hundreds of visitors roping to celebrate the 94th Anniversary of Rashtriya Swayam Sevak Sangh which is Popularly Known as RSS.

RSS ( Rashtriya Swayam Sevak Sangh ) is the hub of Nationalists whom Volunteers to serve the Bharat. This Organisation was started by Sri.Hedgewarji on the auspicious occasion of Vijayadashami in1925. The seed which was sown by the founding fathers of RSS is now yielding the Fruits for the entire Nation. Today RSS has become one of the largest NGO’s of the world. This Organisation emphasises more on Socio-Cultural development in Bharat.

UNIQUE WAY OF FUNCTIONING:
When compared to the rest of NGO’s RSS has a unique way of functioning. The Success of RSS lies in its SHAKAS. Shaka in Hindi means a branch. It is the basic functionary unit of RSS. In SHAKA the young minds of the Nation are groomed as disciplined Soldiers to Bharat. The SHAKA is gathering of People where everyone shows utmost respect to the Bhagwa. Many things are covered in a short span of one hour. The qualities like Public Speaking, Leadership skills, Team spirit and sportiveness are developed. SHAKA provides a healthy environment for an Individual to grow Physically and Mentally strong. Swayam Sevak has to attend SHAKAS so that he can attend Prathamika Shiksha Varg.
Soon after completion, he has to undergo training at three different levels. First one is Prathama Varsha followed by Dwithiya Varsha and Tritiya Varsha.

CONTRIBUTION TO NATION
RSS has always worked for the upliftment of all the Hindus irrespective of their caste. The organisation remained as an all-weather ally to all the Hindus. Whenever Natural calamities or Disasters occurs Sangh will spearhead the relief work across the affected region. It Played a pivotal role in decolonising Goa from Portuguese. In 1971, when war broke out between India and Pakistan RSS supported the Indian government by Providing their valuable services in Maintaining Law and order in National Capital Delhi. Similarly during the Indo-China war in 1963, the then Prime Minister Nehru invited Sangh volunteers to participate in Republic day parade. The affiliated organisations of Sangh like Seva Bharati, Samskara Bharati, Pragna Bharati and Samachar Bharati are engaged in several social activities which will benefit the fellow Indians.

CRITICISM :
The Criticism levied against RSS are severe. The critics and Intellectuals call RSS a replica of Fascism. Many Political Party leaders criticise RSS and even a section of Media in Lutyen’s club try to show RSS in a bad light. Recently even the Prime Minister of Pakistan Imran Khan accused RSS of several things in his speech at UNGA.

Thousand of Swayam Sevaks Lost their lives fighting evil and divisive forces. The killings of Swayam Sevak is a daily routine in West Bengal and Kerala despite which local youth are willing to join the organisation. Despite facing several odds RSS is moving in the RIGHT direction at the RIGHT time to change the Idea of Bharat and striving Hard to make Bharat, a Vishwaguru once again.