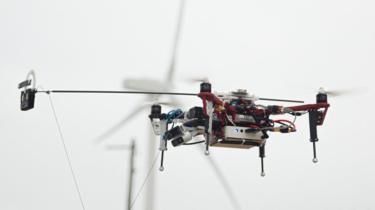 Fully autonomous robots that are able to inspect damaged wind farms have been developed by Scots scientists.

Unlike most drones, they don’t require a human operator and could end the need for technicians to abseil down turbines to carry out repairs.

The multi-million pound project is showing how the bots can walk, dive, fly and even think for themselves.

They’re being developed by Orca – the Offshore Robotics for Certification of Assets hub.

The hub bills itself as the largest academic centre of its kind in the world and is led from Heriot-Watt and Edinburgh universities through its Centre for Robotics.

The consortium also involves Imperial College London, the universities of Oxford and Liverpool, and more than 30 industry partners.

Together, they are producing remarkable robots.

Dr Mirko Kovac and his colleagues in the aerial robotics laboratory at Imperial College London have created a new kind of flying drone.

But this one goes further: it can manoeuvre to attach itself to vertical surfaces and has a robotic arm.

A drone like this could fly to a wind turbine, not just to inspect it but to deploy a sensor or even carry out a repair.

And because it’s autonomous there’d be nobody onshore with a remote control.

It would mean an end to the risky business of humans donning hard hats and harnesses to dangle from a high turbine column over a heaving sea.

This robot – which has the air of a chunky, electronic Rottweiler about it – gets about on four legs instead of wheels. It has been produced by the company ANYbotics and is already on the market.

Principal investigator at the Orca Hub, Prof David Lane of Heriot-Watt, says it presents new opportunities in the energy industry.

“A lot of the offshore platforms we work on are very small. The spaces are very confined, and wheeled robots won’t be able to negotiate their way around the whole platform,” he says.

“So robots that crawl, that have legs and can walk, they can go places on the platform that other robots wouldn’t be able to.”

Orca’s partners are also developing offshore robots that can roll on wheels, float on water or sink beneath its surface.

Heriot-Watt were early leaders in developing submersibles that can inspect, repair and help decommission offshore structures.

But Orca’s game changer lies in developing robots that are not remotely controlled but autonomous and make decisions for themselves.

Using artificial intelligence to create machines that can learn on the job means repairs and inspections can be carried out where radio signals don’t reach and control cables won’t stretch.

To the relief of many, there is still a degree of human supervision.

Helen Hastie, professor of computer science at Heriot-Watt and one of Orca’s technical leads, says it is a question of building trust between human and machines.

“They have an autonomous element, which means that they sense the environment and can make certain decisions by themselves,” she says.

“But what’s important is transparency, so that the operator understands what the robot is doing and why, and we’re trying to get the robots to be explainable so they can explain their behaviour to the operator.”

The Orca Hub is part of the UK government’s £93m R&D funding for robotics and AI for extreme environments.

The offshore industry is under constant pressure to become more efficient. This can be a euphemism for redundancies.

Prof Lane says it’s not a question of putting people out of work.

“People just do different jobs,” she says. “What it does it take people out of harm’s way.

“The robots will be offshore doing the work but there will still be plenty of people back onshore who will be working on the data and actually working on the robots.

“The robots don’t fix themselves.”