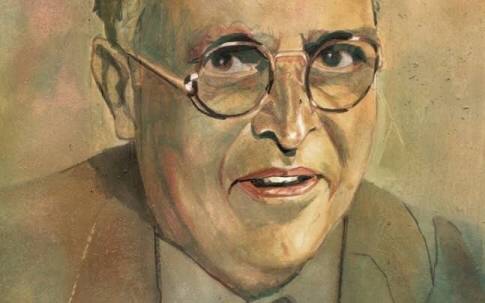 Today we bow down and celebrate the life of a very talented son of Bharat Mata, R.K. Narayan.

When R. K. Narayan died, in the spring of 2001 at the age of ninety-four, his legacy seemed assured. Over seven decades of literary activity, he had produced fourteen novels, countless essays, and dozens of stories, the majority of his fiction set in a South Indian town that he called Malgudi. No more a feature of atlases than Trollope’s Barchester, Narayan’s Malgudi put modern Indian writing on the map. For although a handful of Indian novels had been written in English during the nineteenth century, and both Raja Rao and Mulk Raj Anand had found readers for their novels in English by the nineteen-thirties, it was Narayan—two generations before Salman Rushdie—who began to produce the first world-renowned body of work not rendered in any of India’s many vernacular languages. As such, there seemed little risk of hyperbole when Narayan’s obituary in the Guardian said that he was held to be “India’s greatest writer in English of the twentieth century.”

R. K. Narayan is considered as one of leading figures of early Indian literature in English. He is the one who made India accessible to the people in foreign countries—he gave unfamiliar people a window to peep into Indian culture and sensibilities. His simple and modest writing style is often compared to that of the great American author William Faulkner. Narayan came from a humble south Indian background where he was consistently encouraged to involve himself into literature. Which is why, after finishing his graduation, he decided to stay at home and write. His work involves novels like: ‘The Guide’, ‘The Financial Man’, ‘Mr. Sampath’, ‘The Dark Room’, ‘The English Teacher’, ‘A Tiger for Malgudi’, etc. Although Narayan’s contribution to the Indian literature is beyond description and the way he grabbed foreign audience’s attention for Indian literature is commendable too but he will always be remembered for the invention of Malgudi, a semi-urban fictional town in southern India where most of his stories were set. Narayan won numerous accolades for his literary work: Sahitya Akademi Award, Padma Bhushan, AC Benson Medal by the Royal Society of Literature, honorary membership of the American Academy of Arts and Literature, Padma Vibhushan, etc.