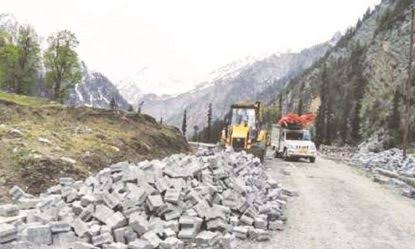 (PTI) Private construction work is in full bloom in Kashmir but the exodus of non-local laborers after the abrogation of Article 370 provisions has resulted in cost escalation of building material, according to industry players here.

Besides the hike in wages of daily-rated laborers, there has been a 15 to 25 percent increase in the costs of bricks, sand, stone, and cement.

“Before the shutdown in Kashmir began on August 5, I purchased bricks for Rs 18,000 per truck. However, the same truckload of bricks is now costing me Rs 22,500,” Manzoor Ahmad, a private work contractor, told PTI.

He said the price escalation has happened due to a shortage of brick kiln workers, who fled the Valley in view of the advisory issued by the government ahead of the decision to revoke special status to Jammu and Kashmir and split the state into two union territories.

Aijaz Ahmad Dar, who is constructing a house in the Hyderpora area of the city, said costs of all building material, except iron, have gone up in the past three months.

With local cement factories not operating due to the prevailing situation, only cement imported from outside the Valley is currently available in the market.

“For the first few weeks of the shutdown, the rates of cement remained stable as there were stocks of local cement available in the market. However, later on, the rates of imported cement went up by Rs 100 per bag of 50 kilograms,” Dar said.

Ghulam Mohammad Wani, a mason, said he is finding it hard to fulfill his contractual obligations due to the rise in wages of local laborers after August 5.

“I used to pay Rs 500 per day to each laborer, irrespective of him being a local or migrant worker. Since the exodus of the non-locals, the local laborers are demanding Rs 600 per day, which has disturbed my calculations as I had given rates for contracts to my clients according to earlier rates,” Wani said.

While private construction work is going on in full swing, the government construction work has been badly affected as the local contractors say they will be making losses if they carry on the work at present rates.

“We work on small profit margins in government contracts. The price escalation is in the range of around 25 to 30 percent, which makes undertaking these works at this juncture unviable,” Ishfaq Ahmad, a government contractor, said.

He said the tenders for new work will have to figure in the price escalation as and when construction work can be resumed.