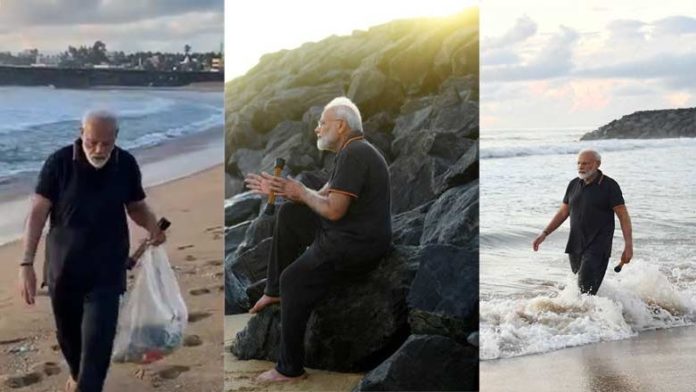 “We believe that an ounce of Practise is worth more than a ton of preaching,” said Indian Prime minister Narendra Modi while addressing the UN summit on Climate change which ended in last month.

Currently, Prime Minister Modi is in Tamil Nadu for an ongoing bilateral talk with Chinese premium Xi Jinping has surprised everyone by plogging at Mamallapuram beach by collecting Plastic and other waste by his own hands. Many Netizens lauded this act of Modi and expressed their enthusiasm to support Modi in “Swach Bharat” Mission. His Cabinet colleagues also applauded efforts. Minister of Environment, Forest & Climate change Prakash Javadekar tweeted

Not only cabinet Ministers but also BJP leaders are hailing the act of Modi. Muralidhar Rao, National General Secretary tweeted

The Statesmen Modi started “Swachh Bharat” Mission on October 2, 2014, to celebrate the anniversary of Mahatma Gandhi which continued till 2019. Since the launch of Swachh Bharat Mission India has gone tremendous change now there are Lakhs of Villages with “ODF” boards which means OPEN DEFECTION FREE is now a reality in Rural India. India under the abled leadership of Narendra Modi is leading the Solar alliance. To tackle Climate change and Global warming India supplied cooking gas to 150 Million Families in India, several steps are taken to recharge the Groundwater under “Jal Jeevan Mission”, the government is also focusing on e-mobility which make sure that there is Zero Emission from Vehicles now the people are slowly switching to Electric Vehicles as part of e-Mobility.

This small gesture of Prime Minister will inspire Millions of his followers in Making Swachh Bharat [Clean India] a reality.