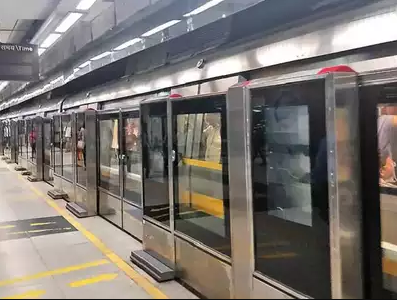 (PTI) Platform Screen Doors (PSDs) have been put on the Pink and Magenta lines of Delhi Metro due to technical requirement and their installation at all the stations would increase the cost of operation, the DMRC has told the Delhi High Court.

“DMRC is currently operating a network of 343.785 km. It may be noted that out of the total 250 stations, the answering Respondent has installed PSDs at 69 Metro stations and all are operational presently (six stations of the yellow line, 38 stations of pink line and 25 stations of magenta line).

“It is submitted that installation of the PSDs on Pink and Magenta line is due to the technical requirement of completely automated train operation system installed in trains operating on such lines,” the Delhi Metro told the bench.

“The cost of installation of PSDs at each of the Metro stations would be substantial, which, if directed to be incurred by Delhi Metro, would ultimately be passed on to the citizens through an increase in fare or through government budgetary support,” it said.

The provision of PSDs increases the cost of signalling substantially apart from increasing the maintenance requirements of the Metro network and it creates severe restrictions on train operations in case of failure or malfunction of the PSDs, the Delhi Metro said.

“The decision to install PSDs at Metro stations is based on the operational requirement, which needs detailed examination qua its technical requirements, costs involved, resources and time involvement, the number of people using a particular station, convenience to the commuters, etc.

“Therefore, any blanket order for installation of the PSDs at each station of the Metro network, as prayed for by the petitioner would actually be an interference to the technical and operational decision of the DMRC,” it said.

The submissions were made in response to a plea filed by advocate Hussain Mueen Farooq to install PSDs on all-time Metro stations.

The high court took note of the submission and disposed of the PIL saying that PSD is a highly technical aspect and it cannot give any directions to the Delhi Metro.