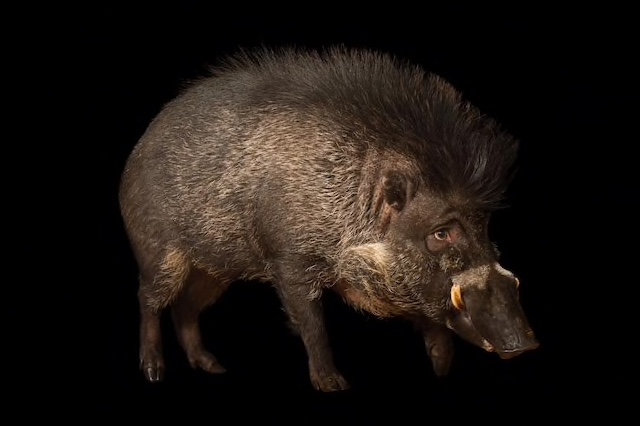 The observations could signal a new cognitive skill previously unknown amid swine, which are well known for their intelligence.

On an October day in 2015, ecologist Meredith Root-Bernstein was watching a family of rare pigs at a Parisian zoo when something caught her eye.

One of the Visayan warty pigs—a critically endangered species native to the Philippines—picked up a piece of bark in its mouth and started digging with it, pushing the soil around. “I said, Whoa, that’s pretty cool,” says Root-Bernstein, a visiting researcher at the Musée de l’Homme in Paris and a National Geographic Explorer. “When I looked up tool use in pigs, there was nothing.”

Intrigued, the scientist returned to the menagerie at the Jardin des Plantes frequently over the following months to try to observe the behavior again, to no avail. She hypothesized that what she’d seen was related to nest-building, which Visayans generally do every six months to prepare for the arrival of piglets. Sure enough, the next spring, a colleague returned to the warty pig enclosure and recorded three of the four animals using tools to complete their nest, an earthen pit filled with leaves.

Though many wild species use tools, from chimpanzees to crows to dolphins, no one has reported the phenomenon in any pig, including the 17 wild pig species and domestic swine. This surprised Root-Bernstein, especially considering the Suidae family’s well-known intelligence.

But because wild pigs are so little studied and, in most cases, either endangered or critically endangered, it may not be so unusual that such innovation has escaped human eyes, says Root-Bernstein, whose study appeared in September in the journal Mammalian Biology.

She says tool use is particularly fascinating to study because it’s a trait shared with humans, as well as one that may highlight a common evolutionary history. “It brings us closer to animals,” she says, “and helps us realize it’s all connected.”

For the research, Root-Bernstein and colleagues videotaped the pig parents and their two offspring using tools four times in 2016 and another seven times in 2017. Thinking that they might prefer more easily wielded tools, the team also added four kitchen spatulas to the enclosure, though that resulted in only one spatula being used twice.

Kanzi, a 39-year-old bonobo, became well-known for his language skills. He can communicate using hundreds of symbols that correlate to words.

Vietnamese potbellied pigs are, like all pigs, highly social. Studies show that they use deception to keep other pigs away from their food.

The team noticed the animals—particularly the mama pig, Priscilla—would always use tools in the middle of the nest-building process. According to Root-Bernstein, this consistency in sequence, combined with the fact the pigs’ tools could physically move the soil, meets the scientific definition for tool use: “The exertion of control over a freely manipulable external object (the tool) with the goal of (1) altering the physical properties of another object, substance, surface or medium … via a dynamic mechanical interaction, or (2) mediating the flow of information.”

The scientists suspect that Priscilla may have learned how to use the tool herself, and passed on that knowledge to her mate and offspring.

Root-Bernstein acknowledges her data set is small, and that the behavior occurred in captivity, which can cause animals to act differently than they do in the wild. She notes, however, that most captivity-induced behaviors are marked by frequent repetition, such as pacing, but that this tool use was scarce and occurred only within the specific context of nest-building.

‘The right thing to do’

A few years ago, Gutierrez witnessed a group of wild Visayans pushing rocks toward an electric fence to test it. “As soon as they push and the rocks make contact, they would wait for the clicking sound or absence thereof,” he said by email. “Clicking means the wires are hot, and they will back off and not cross; no sounds mean it is safe to investigate what’s beyond the wire.”

Rafael Reyna-Hurtado, a National Geographic Explorer and wildlife ecologist who studies Africa’s giant forest hog, notes the study’s small sample size and captive setting but said the results should motivate wild pig scientists to be on the lookout for tool use—himself included.

In Uganda, for instance, Reyna has observed forest hogs—the world’s largest pig—using their snouts to clear the ground free of debris before sleeping or resting, though he hasn’t seen them using tools.

For Root-Bernstein, many questions remain: Namely, why bother with a tool if a snout is just as efficient? The most likely answer is that there isn’t a clear functional explanation, much like chimpanzees that hold hands during grooming so that the groomer has only one hand free.

“Learned things and cultural things work that way,” Root-Bernstein says. “Maybe,” she adds, “it just feels like the right thing to do.”