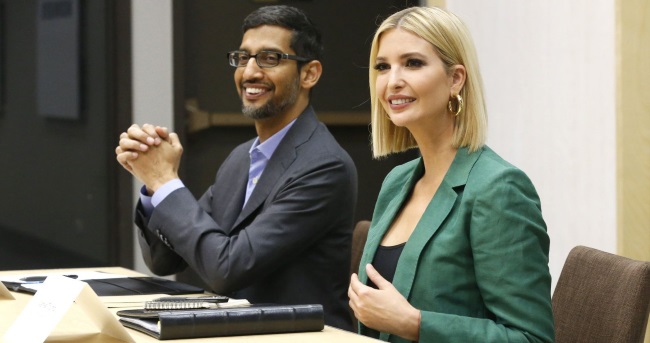 San Francisco, Oct 4 (IANS) Google CEO Sundar Pichai, and Ivanka Trump have announced an initiative to provide 250,000 training opportunities over the next five years for the US citizens to learn new-age technology skills.

Pichai made the announcement with Ivanka Trump at a round-table event in Dallas on Thursday, reports CNET.

The Google CEO, in the line of US President Donald Trump’s fire over the tech giant’s alleged ties to the tampering in 2016 US presidential elections and China’s military, said Google will sign the “Pledge to America’s Workers”, an effort by the White House to “expand programmes that educate, train and reskill American workers from high-school age to near-retirement.”

The Department of Justice is also investigating the search giant for possible antitrust behaviour.

The US President has also accused Google of having an anti-conservative bias, calling the company’s search results “rigged.”

Ivanka, an adviser to the US president, said at the event that that the goal, through the pledge, “is to fill those opportunities with the next generation of talent”.

Donald Trump in March addressed Pichai on Twitter as “President of Google” after meeting him to discuss issues surrounding its dealings with China and “political fairness”.

Pichai is the Chief Executive Officer (CEO) of Google.

“Just met with @SundarPichai, President of @Google, who is obviously doing quite well. He stated strongly that he is totally committed to the U.S. Military, not the Chinese Military….,” Trump tweeted after the meeting.

“…Also discussed political fairness and various things that @Google can do for our Country. Meeting ended very well,” he tweeted.

Google earlier faced flak after media reported that the company was trying to build a secret search engine for China that would censor results. The project was reportedly put on hold after Google faced global outrage.