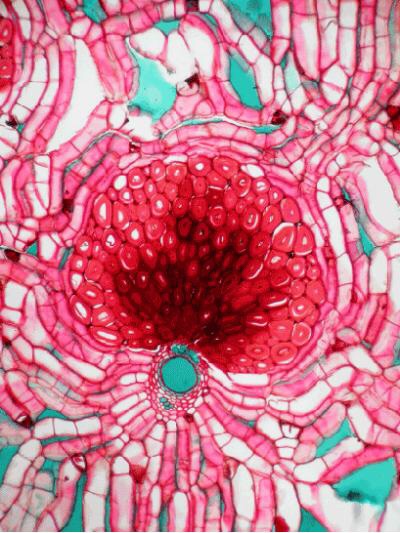 For centuries, humans have been exploring, researching, and, in some cases, discovering how to stave off life-threatening diseases, increase life spans, and obtain immortality. Biologists, doctors, spiritual gurus, and even explorers have pursued these quests–one of the most well-known examples being the legendary search by Ponce de León for the “Fountain of Youth.” Yet the key to longevity may not lie in a miraculous essence of water, but rather in the structure and function of cells within a plant–and not a special, mysterious, rare plant, but one that we may think of as being quite commonplace, even ordinary: the palm.

As an honors botany student at the University of Leeds, P. Barry Tomlinson wrote a prize-winning essay during his final year titled, “The Span of Life.” Fifty years later, Tomlinson (now a Distinguished Professor at The Kampong Garden of the National Tropical Botanical Garden, Miami, FL) teamed up with graduate student Brett Huggett (Harvard University, Cambridge, MA) to write a review paper exploring the idea that palms may be the longest-lived tree, and whether this might be due to genetic underpinnings. Having retained his essay in his personal files, Tomlinson found that it provided an excellent literature background for working on the question of cell longevity in relation to palms.

A component of an organism’s life span that biologists have been particularly interested in is whether longevity is genetically determined and adaptive. For botanists, discovering genetic links to increasing crop production and the reproductive lifespan of plants, especially long-lived ones such as trees, would be invaluable.

In their paper, Tomlinson and Huggett emphasize that in many respects, an organisms’ life span, or longevity, is determined by the period of time in which its cells remain functionally metabolically active. In this respect, plants and animals differ drastically, and it has to do with how they are organized–plants are able to continually develop new organs and tissues, whereas animals have a fixed body plan and are not able to regenerate senescing organs. Thus, plants can potentially live longer than animals.

“The difference in potential cell longevity in plants versus animals is a significant point,” states Tomlinson. “It is important to recognize that plants, which are so often neglected in modern biological research, can be informative of basic cell biological features in a way that impacts human concern at a fundamental level.”

The authors focused their review on palm trees because palms have living cells that may be sustained throughout an individual palm’s lifetime, and thus, they argue, may have some of the longest living cells in an organism. As a comparison, in most long-lived trees, or lignophytes, the main part, or trunk, of the tree is almost entirely composed of dead, woody, xylem tissues, and in a sense is essentially a supportive skeleton of the tree with only an inner ring of actively dividing cells. For example, the skeleton of Pinus longaeva may be up to 3000 years old, but the active living tissues can only live less than a century.

In contrast, the trunks of palms consist of cells that individually live for a long time, indeed for the entire life of an individual.

Which brings up the question of just how long can a palm tree live?

The authors point out that palm age is difficult to determine, primarily because palms do not have secondary growth and therefore do not put down annual or seasonal growth rings that can easily be measured. However, age can be quite accurately assessed based on rate of leaf production and/or visible scars on the trunk from fallen leaves. Accordingly, the authors found that several species of palm have been estimated to live as long as 100 and even up to 740 years. The important connection here is that while the “skeleton” of the palm may not be as old as a pine, the individual cells in its trunk lived, or were metabolically active, as long as, or longer than those of the pine’s.

Most plants, in addition to increasing in height as they age, also increase in girth, putting down secondary vascular tissue in layers both on the inner and outer sides of the cambium as they grow. However, palms do not have secondary growth, and there is no addition of secondary vascular tissue. Instead, stem tissues are laid down in a series of interconnected vascular bundles–thus, not only is the base of the palm the oldest and the top the youngest, but these tissues from old to young, from base to top, must also remain active in order to provide support and transport water and nutrients throughout the tree.

Indeed, the authors illustrate this by reviewing evidence of sustained primary growth in two types of palms, the coconut and the sago palm. These species represent the spectrum in tissue organization from one where cells are relatively uniform and provide both hydraulic and mechanical functions (the coconut) to one where these functions are sharply divided with the inner cells functioning mainly for transporting water and nutrients and the outer ones for mechanical support (the sago palm). This represents a progression in specialization of the vascular tissues.

Moreover, there is evidence of continued metabolic activity in several types of tissues present in the stems of palms, including vascular tissue, fibers, ground tissue, and starch storage. Since the vascular tissues in palms are nonrenewable, they must function indefinitely, and Tomlinson and Huggett point out that sieve tubes and their companion cells are remarkable examples of cell longevity as they maintain a long-distance transport function without replacement throughout the life of the stem, which could be for centuries.

“We are not saying that palms have the secret of eternal youth, and indeed claim no special chemical features which allows cells in certain organisms to retain fully differentiated cells with an indefinite lifespan,” states Tomlinson. “Rather, we emphasize the distinctive developmental features of palm stems compared with those in conventional trees.”

Tomlinson indicates that this reflects the neglect of the teaching of palm structure in modern biology courses. “This paper raises incompletely understood aspects of the structure and development of palms, emphasizing great diversity in these features,” he concludes. “This approach needs elaborating in much greater detail, difficult though the subject is in terms of conventional approaches to plant anatomy.”