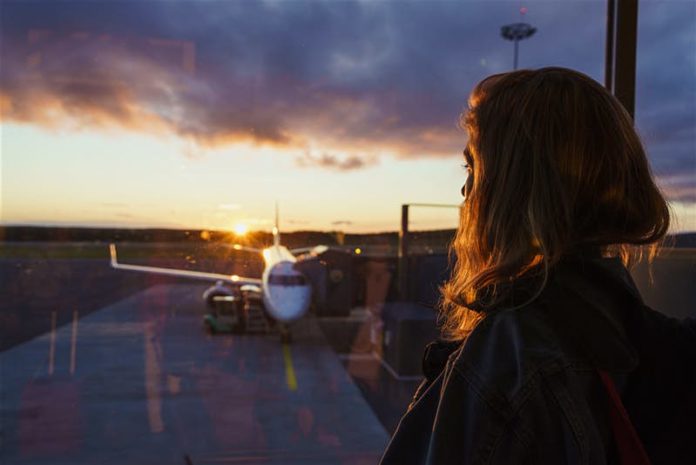 A fear of flying isn’t uncommon but, for some people, it can make travelling an incredibly stressful experience and, for others, prevent them from going on the adventure of their dreams entirely. We asked three people with different perspectives for their tips on how to manage anxiety before and during a flight.

Advice from a psychologist

Les Posen is a clinical psychologist based in Melbourne, whose interest in aviation led him to an interesting specialty. For 25 years he has been working with patients from all walks of life who are anxious about flying, from teenagers to CEOs.

‘The two-part explanation for anxiety is: an overestimation of danger in either a physical or psychological sense, and an underestimation of the ability to cope with things,’ Posen says. He commonly sees a fear of flying arise in two categories of people. ‘It’s common for women ranging between about 32 to 38 years old with children to develop this kind of anxiety. All of a sudden, the stresses are not just about oneself – there are other people in the mix, people who all of a sudden depend on you,’ he says. ‘Other times I see this fear grow is in people who, for much of their life, have relied on their intellect too much and downplayed their emotional side, not acknowledging signs of anxiety.’

Whatever the underlying cause, Posen’s starting point for learning how to manage anxiety while flying remains the same. ‘I’d suggest starting with actually learning about the biology of anxiety and the ways it can affect the body. Physiological signs like an increased heart rate and sweating are key indicators.’

So what should you do when you experience these signs? ‘Managing fear response is the aim. Calmness is not,’ he asserts. ‘Do not aim to be ‘calm’ – it’s an outcome. It’s nice when it happens; it’s not the target behaviour. The target behaviour is knowing that ‘I can manage what is thrown my way regardless’.’

Posen suggests aiming to be calm is overrated. ‘People often think ‘I am calm when I am in control’, but the reality is, in a plane, there is much control passengers must give up. Instead of trying to be calm, try to focus. A simple way this can be done is through breathing techniques. Focused breathing can put you in a state of focus that allows you to carry out well-planned and well-rehearsed activities that help you self-manage and therefore lead to a state of personal control.’

Posen has also found that learning about aviation – specifically how planes work, exactly what happens during taxiing, take-off, turbulence and landing – has helped many of his patients. It’s something that can be easily researched individually, too. There are dedicated ‘fear of flying’ courses run by airlines (and there are also some on the internet) for those wanting to take things a step further.

‘During flight, there are many elements that can bring someone out of their comfort zone. The aim is for people to feel like they can handle different sensations in a plane, when faced with things like G-forces or loud noises.’

One technique Posen urges people experiencing anxiety not to reply upon completely, however, is distraction. ‘Be wary – distraction loses potency over time,’ he says. ‘You have to ask yourself ‘if my iPhone was to fail, if the batteries in my noise cancelling headphones died, could I handle this flight on my own?’ That’s the test. It’s important to have a contingency plan.’

Insider knowledge from a flight attendant

Cassandra Crossley is a flight attendant for Qantas and, like Posen, believes understanding how planes work, even on a basic level, can assist nervous flyers. Turbulence is one point she thinks travellers are misinformed about.

‘People are often concerned that planes are not stable in the air due to turbulence. Turbulence is normal, it won’t cause any issues with the flying of the aircraft. It’s not going to bring down an aircraft and even if it is strong enough to cause a few bumps, pilots are trained in manoeuvring out of bad situations.

‘However it is important to wear your seat belt to avoid jumping out of your seat and getting injured. It can be a little scary, but it doesn’t last forever.’

‘We’re also eager to remind people that while cabin staff are present to serve meals and beverages, our primary job is to ensure our aircraft is safe and able to fly. It is most important to us as crew to ensure all safety and security checks are completed and, on the rare occasion that something does come up that needs a second look or even fixing, we get onto it straight away.

‘Sure, this may cause delays and even some frustration for passengers; however, safety is the number one priority.’

Crossley encourages passengers who are experiencing anxiety on planes to reach out to flight attendants, even though it may not be their first thought or preference. Flight attendants have experienced a huge variety of situations in the air, and can often recommend exercises to help passengers when they’re in a state of stress.

Tips from an anxious flyer who has faced her fears

Agapi Markogiannakis is an associate for a consultancy firm that specialises in leadership development and positive psychology, and her work requires her to fly regularly. Her own fear of flying has tested her, but she has been able to use elements of the positive psychology she teaches others to help her deal with anxiety when travelling.

‘I wasn’t so nervous of getting on a plane when I was young, but after I had kids I became much more on edge. Leaving people behind and thoughts like ‘what could happen to me?’ come into play,’ Markogiannakis says. ‘Even during short-haul flights I became jittery, especially during turbulence, which creates the biggest panic for me.’

Markogiannakis has an array of techniques and strategies to get through a flight. ‘Movies are essential for me, as are good earphones to cut out as much engine noise as possible. I plan out pretty much exactly what I’m going to do on a flight. I have lots of things to do, magazines to look through, I bring snacks I love, plan out what movies I’m going to watch and when. Knowing when meal service is helps, too.’

But aside from the fun stuff, she focuses on three things: mindfulness, curiosity, and labelling her emotions.

‘I practise meditation during takeoff and turbulence. It’s something you can easily teach yourself. I may occasionally bring in a visualisation, but only in the moments that I really need it. I try and imagine I am somewhere else and get excited about doing different things on my trips. During landing I’m fine – I’m partying, woo hoo!’ Markogiannakis laughs.

She echoes Posen’s point about being aware of physiology. ‘I check my body head to toe for any areas I may be holding tension in, then I focus to release that tension.’

Markogiannakis believes there is a lot of power in curiosity. ‘What I’ve learnt is that you can’t really be properly curious and anxious at the same time. Whether it’s people or things on the plane, or great things that may wait when landing in a destination, I try and get curious about different things.’

Her third technique, labelling her emotions, works on the theory that recognising emotions can help people to relax. ‘If you’re feeling anxious, actually saying the word ‘anxious’ may confront the feeling,’ she explains.

Now Markogiannakis’ fear doesn’t control her. ‘The desire to be somewhere and do something outweighs the fear of flying,’ she says. ‘My fear doesn’t prevent me from travelling.’