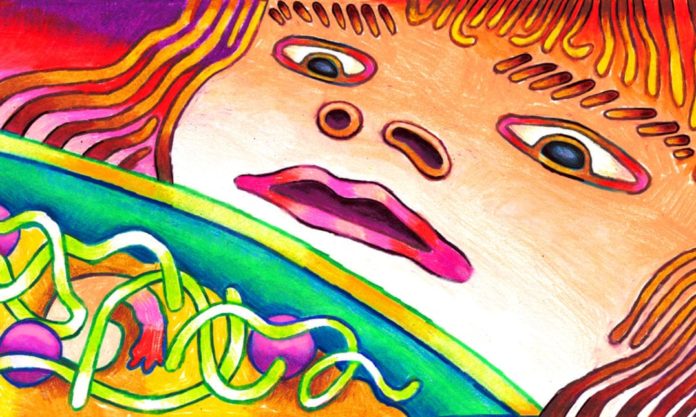 Obsessive-compulsive disorder isn’t just being a neat freak: it’s a struggle for survival taking place inside your mind

OCD can seem almost trendy. The “fun” mental illness. Harmless. A punchline. An article. People love to say, “I’m so OCD!” when referring to the fact that they color-coordinate their closets or like to keep the papers on their desks squared off. NBD. But most of these people do not, in fact, have OCD. And not all people with OCD are neat freaks, germaphobes, or any other stereotypical trope of the disorder. More commonly, OCD flies under the radar, often making its sufferers feel extremely isolated, fearful, and even “crazy” before they understand their unique brain patterns and how to manage them.

Have you ever had a song stuck in your head that you just could not get to stop playing over and over and over again, no matter how hard you tried? That’s what OCD can be like. Except instead of a song, imagine a highlight reel of your fears, worries, and worst-case-scenarios playing like a broken record in your mind. It’s like a glitch in the brain. Like some sadistic gnome sitting in front of a control panel in your head saying “what’s the most horrible, terrifying thing you can imagine? Got it? Great. Let’s run that on repeat for the next 6 hours.”

Or imagine you’re walking down the street, having a perfectly lovely day, when you pass a shop window with a TV in it. On the screen, a gory crime scene suddenly and unavoidably filling your field of vision. OCD can be like that too. Scary, upsetting thoughts that just bust their way into your mind with no provocation at all like the Kool Aid man. (“OH YEAH” my a@$.) These are called “intrusive thoughts,” and they are no more under an OCD sufferer’s control than the weather. So telling someone with OCD to “just stop thinking about it” or “quit worrying” is not only unhelpful, it’s shaming and infuriating.

What exactly are obsessions and compulsions?

Obsessions are thoughts, images or impulses that occur over and over again and feel outside of the person’s control. Individuals with OCD do not want to have these thoughts and find them disturbing. In most cases, people with OCD realize that these thoughts don’t make any sense.  Obsessions are typically accompanied by intense and uncomfortable feelings such as fear, disgust, doubt, or a feeling that things have to be done in a way that is “just right.” In the context of OCD, obsessions are time consuming and get in the way of important activities the person values. This last part is extremely important to keep in mind as it, in part, determines whether someone has OCD — a psychological disorder — rather than an obsessive personality trait.

Unfortunately, “obsessing” or “being obsessed” are commonly used terms in every day language. These more casual uses of the word means that someone is preoccupied with a topic or an idea or even a person. “Obsessed” in this everyday sense doesn’t involve problems in day-to-day living and even has a pleasurable component to it. You can be “obsessed” with a new song you hear on the radio, but you can still meet your friend for dinner, get ready for bed in a timely way, get to work on time in the morning, etc., despite this obsession. In fact, individuals with OCD have a hard time hearing this usage of “obsession” as it feels as though it diminishes their struggle with OCD symptoms.

Even if the content of the “obsession” is more serious, for example, everyone might have had a thought from time to time about getting sick, or worrying about a loved one’s safety, or wondering if a mistake they made might be catastrophic in some way, that doesn’t mean these obsessions are necessarily symptoms of OCD. While these thoughts look the same as what you would see in OCD, someone without OCD may have these thoughts, be momentarily concerned, and then move on. In fact, research has shown that most people have unwanted “intrusive thoughts” from time to time, but in the context of OCD, these intrusive thoughts come frequently and trigger extreme anxiety that gets in the way of day-to-day functioning.

Compulsions are the second part of obsessive compulsive disorder. These are repetitive behaviors or thoughts that a person uses with the intention of neutralizing, counteracting, or making their obsessions go away. People with OCD realize this is only a temporary solution but without a better way to cope they rely on the compulsion as a temporary escape. Compulsions can also include avoiding situations that trigger obsessions. Compulsions are time consuming and get in the way of important activities the person values.

Similar to obsessions, not all repetitive behaviors or “rituals” are compulsions.  You have to look at the function and the context of the behavior. For example, bedtime routines, religious practices, and learning a new skill all involve some level of repeating an activity over and over again, but are usually a positive and functional part of daily life. Behaviors depend on the context. Arranging and ordering books for eight hours a day isn’t a compulsion if the person works in a library. Similarly, you may have “compulsive” behaviors that wouldn’t fall under OCD, if you are just a stickler for details or like to have things neatly arranged. In this case, “compulsive” refers to a personality trait or something about yourself that you actually prefer or like. In most cases, individuals with OCD feel driven to engage in compulsive behavior and would rather not have to do these time consuming and many times torturous acts. In OCD, compulsive behavior is done with the intention of trying to escape or reduce anxiety or the presence of obsessions