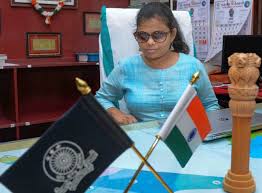 (PTI) “Never be defeated, Never give up“, said Pranjal Patil, the country’s first visually challenged woman IAS officer, as she assumed charge as the Sub Collector of Thiruvananthapuram here on Monday.

“…we should never be defeated and we should never give up because with our efforts all of us will get that one breakthrough which we want”, the 30-year old Kerala cadre officer told media persons here.

Patil, who hails from Ulhasnagar in Maharashtra, had lost her vision when she was just six years old.

She cracked the Union Public Service Commission (UPSC) examination in 2016 and secured 773rd rank and improved her ranking to 124 the next year.

Patil was appointed Ernakulam Assistant Collector during her training period.