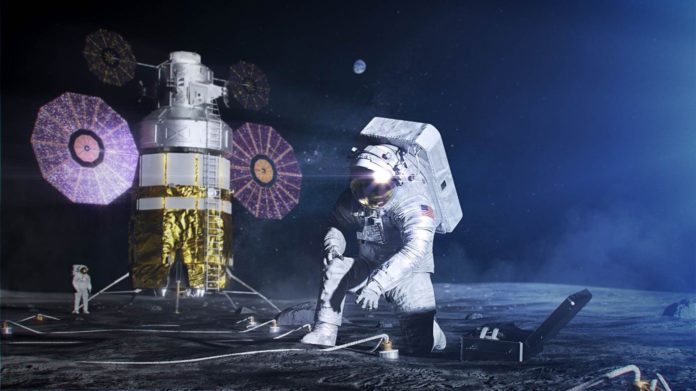 The next Americans to set foot on the Moon will do so in a brand new space suit that’s based on, but hugely improved from, the original Apollo suits that last went up there in the ’70s. With easier entry, better mobility and improved communications, these won’t be nearly as clumsy or restrictive — though you still wouldn’t want to wear one around the house.

The new spacesuit, known as the Exploration Extravehicular Mobility Unit or xEMU, is still deep in development, but its features have been more or less finalized. It’s already being tested underwater, and orbital testing is scheduled for 2023.

Rather than build something completely new from the ground up, NASA engineers decided to address the (sometimes literal) pain points of a previous, proven design. As such, the new suit superficially resembles the ones in which we saw moonwalkers bunny-hopping around the lunar surface. But that’s because the basic design for a suit that protects you from hard vacuum and cosmic radiation is relatively straightforward.

In NASA’s words, a spacesuit is “a personalized spaceship that mimics all of the protections from the harsh environment of space and the basic resources that Earth and its atmosphere provide.” There’s only so much wiggle room there.

But while some parts may not have changed much since the old days, others are getting major improvements. First and foremost, both for safety and mission purposes, maneuverability has been upgraded in tons of ways.

For one thing, there are altogether new joints and better ranges of motion for existing ones. The standard “astronaut stance” indicative of the inflexibility of the Apollo suits should be all but eliminated with the new freedoms afforded xEMU users. Not only will the normal range of motion be easier, but astronauts will be able to reach across their own torso or lift something clear over their head.

More flexible knees and “hiking-style” boots with flexible soles will make crouching and getting up much easier as well. It’s hard to believe we got this far without those basic capabilities.

The fit of the suits will be vastly better as well; NASA is using anthropometry, or 3D scanning of the body, to determine exactly which pieces and fits will be best for a given astronaut.

Speaking of which, much of the suit will be made from easily swappable, modular parts. The lower half can be switched out when doing an orbital EVA versus a surface EVA, for instance. And the helmet’s visor has a “sacrificial” protective layer that can easily be replaced with a new one if it gets damaged.

Inside the helmet, the familiar but apparently widely disliked “Snoopy caps” that housed microphones and such are gone, replaced by modern voice-activated mics and headphones that will produce much better audio quality and much less sweat.

For that matter, the entire communications stack has been replaced with a new HD camera and lights, connected by a high-speed wireless data link. Live video from the Moon may be old hat, but it’s going to be a bit different from that grainy black-and-white business in 1969.

One of the most important new features is rear entry. The awkward process of donning an old-style EVA suit requires a good deal of space and help. The new ones are entered via a hatch on the back, allowing more natural placement of arm hinges and other features, and possibly changing how the suits are mounted. One can easily imagine a suit acting as a sort of airlock: you climb in the back, it seals you in, and you walk right out into space. Well, there’d probably be more to it than that, but the rear-entry hatch could facilitate some cool stuff along those lines.