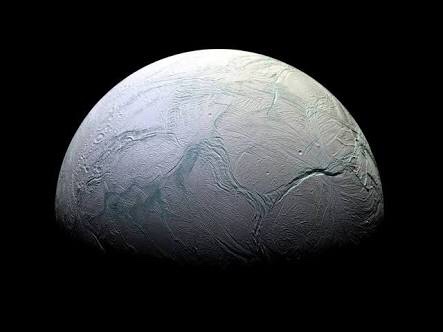 Scientists just found the most basic ingredients for life bursting from an ocean on Saturn’s moon Enceladus.

A new analysis of NASA data reveals the presence of organic compounds in the plumes of liquid water that shoot into space from the ocean below Enceladus’s icy crust.

These compounds, which carry nitrogen and oxygen, play a key role in producing amino acids ⁠- complex molecules that serve as the building blocks of proteins. Without proteins, life as we know it on Earth couldn’t exist.

Scientists have long suspected that the ocean below Enceladus’s surface could harbour the ingredients for life. Researchers had detected other organic molecules coming from the icy moon before, but this is the first time anyone has detected them dissolved in the water.

That’s critical, since it means the compounds could undergo deep-sea chemical reactions that produce amino acids.

These findings were published Wednesday in the journal Monthly Notices of the Royal Astronomical Society.

“This work shows that Enceladus’ ocean has reactive building blocks in abundance, and it’s another green light in the investigation of the habitability of Enceladus,” Frank Postberg, a co-author of the study, said in a press release.

In deep-sea vents, these compounds could create life

On Enceladus, jets of ocean water and ice regularly shoot out into space through warm cracks in the moon’s crust.

The NASA scientists behind the new study analysed data on the chemical composition of those plumes, and found several new organic compounds, some containing nitrogen and some containing oxygen.

These compounds were dissolved in the ocean water below Enceladus’s surface. They then evaporated with the surface water, condensed, and froze into the moon’s icy crust, according to the study. The plumes blew the compounds into space, where NASA’s Cassini spacecraft sensed them as it flew nearby.

The compounds are yet another sign that Enceladus might have its own version of a process that creates life on Earth.

Deep in Earth’s oceans, seawater mixes with magma that bubbles up through cracks in the ocean floor. That interaction produces smoky hydrothermal vents that can get as hot as 700 degrees Fahrenheit (370 degrees Celsius).

The vents spew hydrogen-rich hot water, fuelling chemical reactions that transform organic compounds into amino acids. Those amino acids can then stack onto each other like Legos to form proteins, which are crucial for replicating the genetic information that creates life.

This process allows life to develop without the assistance of sunlight. That’s important because Enceladus’s ice surface is highly reflective and sends what little sunlight the moon receives back into space. Any life there would have to develop in the dark.

Scientists believe that potential hydrothermal vents in the subsurface ocean on Enceladus might work similarly to those on Earth.

“If the conditions are right, these molecules coming from the deep ocean of Enceladus could be on the same reaction pathway as we see here on Earth,” Nozair Khawaja, who led the research team behind the latest discovery, said in a release. “We don’t yet know if amino acids are needed for life beyond Earth, but finding the molecules that form amino acids is an important piece of the puzzle.”

Last year, the team discovered similar organic molecules from the same data. But the molecules were not water-soluble; the researchers believe that they sat on the surface of the Enceladus ocean.

Such compounds would need to dissolve into ocean water in order to interact with hydrothermal vents and produce life. Until now, scientists weren’t sure if organic compounds on Enceladus did that.

“Here we are finding smaller and soluble organic building blocks – potential precursors for amino acids and other ingredients required for life on Earth,” Jon Hillier, another co-author of the study, said in the release.

The data scientists used to arrive at both of these findings came from NASA’s Cassini mission. The probe launched in 1997 and spent 13 years exploring Saturn and its moons.

In September 2017, the mission ended when scientists intentionally sent the spacecraft plummeting into Saturn. They did this to avoid contaminating Enceladus or Titan, another nearby moon that could also harbour life, with Earthly microbes.

Cassini discovered that Enceladus conceals a global ocean of liquid saltwater below its surface, and photographed jets of that water shooting into space. The probe flew through those plumes and collected data about their composition in 2008.

Scientists plan to continue studying that and other data collected by Cassini for decades to come.

NASA also plans to send a probe to Saturn’s moon Titan, which is another a prime target in the search for alien life because of its own abundant organic compounds. That mission is set to launch a nuclear-powered helicopter called Dragonfly toward Titan in 2026.

The spacecraft is expected to arrive at Titan in 2034, then start hunting for signs of life.

How to store electricity?

The Power of Language – another Dimension after Time