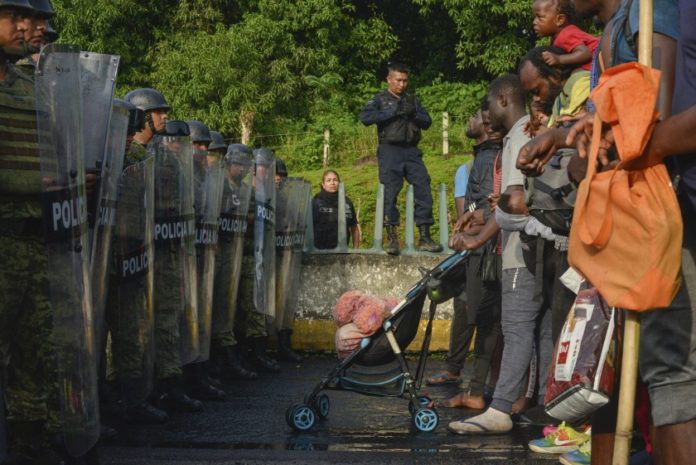 MEXICO CITY — Mexican authorities on Saturday thwarted the latest caravan of migrants attempting to head north from southern Mexico with the hope of reaching the United States.

Some 2,000 migrants from various nations — including Central American and African countries, Haiti and Cuba — set off on foot in the predawn hours from the southern Mexican city of Tapachula.

It was the first such caravan since early 2019, as Mexico — under pressure from the Trump administration to curb U.S.-bound migration thorough its territory — has cracked down on Central Americans and others seeking to reach the United States.

On Saturday, the northbound caravan met a phalanx of Mexican authorities, including National Guard and federal police units along the highway at a point about 25 miles north of Tapachula. The enforcement presence prompted almost half the caravan members — including many women and children — to surrender to Mexican immigration authorities.

While many caravan participants surrendered, others scattered and veered from the highway at the point where authorities blocked the northbound route and sought to continue their journey on side roads, circumventing the enforcement cordon.

Thousands of migrants seeking to reach U.S. territory — more than 1,000 miles to the north — have been stuck in Tapachula for months as Mexican officials have been hesitant to hand out visas allowing them to continue north. Most entered Mexico from Guatemala. The migrants stranded in Tapachula are mostly Central Americans but include others from the Caribbean, South America, Africa and Asia.

Mexico has responded to pressure from the Trump administration to curb third-country migration by bolstering enforcement in southern Mexico and posting National Guard troops along northbound highways and along entry routes on the Guatemalan border. The Mexican effort has contributed to a sharp reduction of migrants arriving to the U.S. border in recent months, U.S. authorities say.

Mexico has also accelerated detentions and deportations of undocumented migrants in response to White House threats to impose tariffs on Mexican goods exported to the United States.

Last year, as thousands of migrants began to head north in caravans from Central America, Mexico initially did little to block the northbound odyssey. Trump denounced the caravans as an “invasion” and threatened economic retaliation against Mexico if it did not do more to deter the migration.

The government of President Andres Manuel Lopez Obrador, who took office Dec. 1, has yielded to White House pressure to crack down on northbound migration via Mexican territory. Trump has praised Mexico’s efforts to help implement his hard-line immigration strategy.