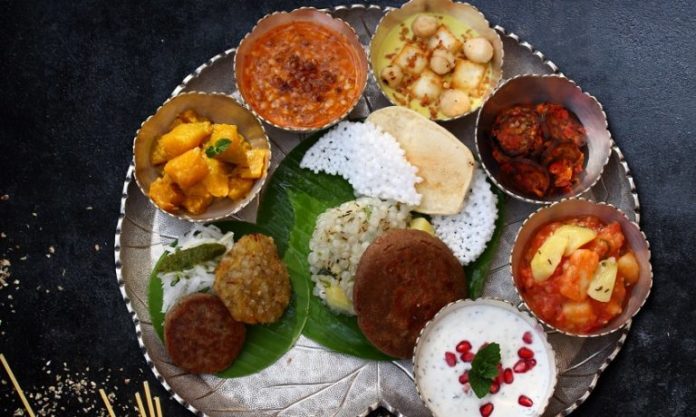 New Delhi, Oct 4 (PTI) For those fasting these nine Navratris days, eating out can be quite a challenge with a host of nos no garlic, no onion, no wheat flour and no regular salt either but a feast awaits them outside their homes should they decide not to cook.

Restaurants, fine dining and casual, are cooking up feasts for the fast, dishing out staples like kuttu (buckwheat) pooris’ and curating special menus with a touch of the exotic like kafir lime paneer tikka with pineapple chutney’.

Operating within a strict diet regimen that rules out many vegetables — and all kinds of meats and alcohol of course — restaurateurs are ensuring that fasters’ need not worry about their religious bindings.

The innovations are plenty. White salt is substituted with rock salt, wheat flour with buckwheat flour, also known as ‘kuttu ka atta’, and rice with samak’, a kind of millet.

From salads and fritters to variants of ‘sabudana (tapioca) khichdi’ and custards, eateries have whipped up recipes to give fast‘ food a culinary revamp.

At the Cha Bar, which has multiple outlets across the Delhi-NCR region, those fasting can gorge on potato fritters, the humble pakoda’, and ‘saatvik’ (without onion, garlic) salad made of potatoes seasoned with lightly roasted sesame seeds and rock salt, and khichdi’ made of sabudana’ with potatoes and peanuts, all for Rs 120.

Culina 44 at Taj City Centre in Gurgaon is giving those fasting a chance to relish flavours from across the country.

Apart from the regular Navratri thali, they bring to the table special festive thalis from Bengal, Gujarat, Punjab and South India.

“This Navratri, we thought of doing something different. Apart from the regular Navratri thali, we are celebrating the thalis from across the country – north, south, east and west of India,’ said Abhijeet Thakre, executive chef at Taj City Centre.

“All the dishes in these thalis are prepared with saatvik’ ingredients. One can savour ‘Bengali boger khichuri’, a Durga Puja speciality prepared with moong dal’ and an assortment of vegetables from the east. There is also ‘kobij nu kachumbar’, cabbage tempered with mustard seeds from the west and ‘cheppamkarumadhu’ , crispy fried colocasia spiced with button chillies and kadha prasad’ (the famous semolina ‘halwa’ served in gurdwaras) from the north,” he added.

Some places like Kiyan by The Roseate, close to the border with Gurgaon, and Imperfecto Shor Cafe at the Aerocity complex near the airport are keeping it old school with traditional recipes.

Imperfecto Shor Cafe has decided to entertain sudden hunger pangs of all those on a fast and everyone else with good food, even at odd hours.

One can walk in anytime, even for a midnight binge session with the restaurant functional 24×7 during the festive season.

Those who do not want to step out of their homes while fasting, but are also bored of the usual fast food, can choose from a handcrafted and nutritious collection by Caterspoint in Gurgaon that has on offer nine types of ‘sabudana khichdi’, nine custards, nine shakes, nine ‘kheer’ and much more.

So go out, or not, but make sure you eat to your heart’s content.

Navratri is celebrated in northern and western India over a span of nine days to celebrate goddess Durga’s triumph over the buffalo demon Mahishasur. During the festival, the nine different forms of the deity are worshipped. The nine days end on Monday.

Those fasting are expected follow certain dietary rules, due to the popular belief that practising abstinence will get them closer to god.