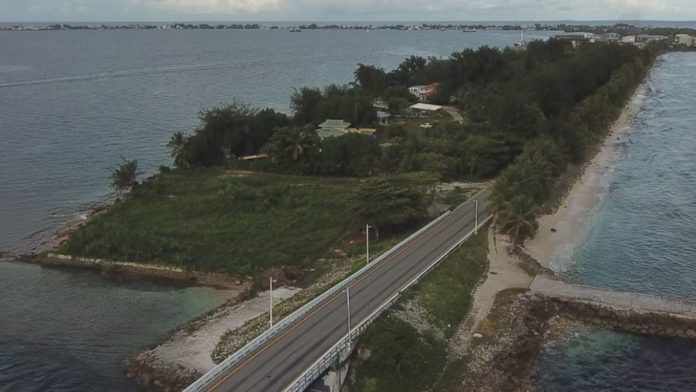 The Marshall Islands, a low-lying chain of atolls and key U.S. ally in the Central Pacific, has declared a national climate crisis because of the mounting risk of sea-level rise, the nation’s president announced this week.

The nation’s parliament, the Nitijela, overwhelmingly supported a measure that calls upon the international community to step up its efforts to mitigate global warming and provide aid to nations unable to finance safeguards against rising seas.

“As one of only four low-lying coral atoll nations in the world, the failure of the international community to adequately respond to the global climate crisis of its own making holds particularly grave consequences,” wrote President Hilda Heine in a tweet Wednesday.

Low-lying coral atoll nations such as the Marshall Islands, Kiribati and Tuvalu in the Pacific and the Maldives in the Indian Ocean are particularly vulnerable to rising oceans, averaging just a few feet above sea level. There have already been episodes of “King Tide” flooding in the Marshall Islands, which consists of 29 coral atolls, located about 5,000 miles from Los Angeles and 2,000 from Hawaii.

Tina Eonemto Stege, the islands’ climate envoy, said Friday that it was “imperative” the world support efforts of island nations to adapt to sea-level rise. “We must now focus intensely on adaptation measures to save ourselves from a crisis that is literally spilling over our seawalls,” she told the Times.

A recent Intergovernmental Panel on Climate Change (IPCC) report warned that sea level could rise by 1 to 4 feet by 2100, potentially submerging many of these nations, and by 2050, making many uninhabitable.

The report echoes research sponsored by the Department of Defense, which found Kwajalein Atoll, where the U.S. leases a strategic military base, could become unlivable by 2030, if the Antarctic ice sheet were to melt. Mid-century inhabitability due to flooding, storm waves and ground water contamination by salt water was predicted in a more conservative model.

The resolution calls upon the Nitijela to “unite fully and unequivocally behind the science” and to recognize the rights of the Marshallese youth to grow up in a “climate safe future.”

It asks the international community to “consider additional ways to respond to and support the extreme vulnerability and special circumstances” unique to low-lying coral atoll islands, such as the Marshall Islands.

“Prolonged and unseasonal droughts are hitting us real hard, and saltwater is creeping into our freshwater lands,” said Heine last month at the United Nations Climate Action conference in New York. “We are on the very front line of climate change.”