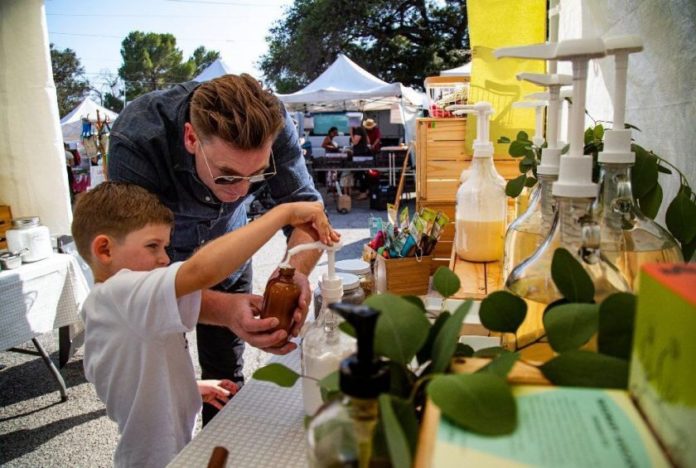 For the last two years, Jasper and Vjera Watts, along with their daughter Isla, 8, and son, James, 5, have been trying their best to live plastic-free. No matter where they go — from school and the office to the mall, airport or park — everyone travels with a stainless steel water bottle and his or her own utensils. Ice cream served in paper cups with wooden spoons at the farmers market has replaced once-regular treks to Jamba Juice. Most toys bought are used ones. Toothbrushes are made of bamboo. A family snack favorite — tortilla chips from Baja Fresh — is bought and carried home in paper bags. And every three months, a service called Who Gives a Crap delivers 48 rolls of toilet paper and six of paper towelswithout plastic wrapping to the family’s Altadena home.

“My motivation is to leave a better world for our kids,” Jasper says. “It’s our job to make smart decisions as consumers, and to educate the next generation, or the situation is only going to get worse.”

Some 335 million tons of plastic are produced worldwide every year, of which only 9% is ever recycled. Most plastic ends up in landfills, or in rivers and oceans where it contaminates our water and food and kills wildlife. Plastic never truly goes away either. It breaks down only into tiny pieces called microplastics, which contain toxins. Exposure to microplastics has been linked to multiple health issues including cancers.

As hikers and beach lovers, Jasper, 37, and Vjera, 41, always considered themselves eco-friendly. But it was only after watching a documentary about whales washing ashore dead with bellies full of plastic that they decided to reexamine their lives.

Once they opened their eyes to plastic pollution, the problem felt overwhelming. Wasteful use of the shiny substance seemed to be everywhere, from grocery and clothing stores to the packaging of Amazon orders. Even their son’s back-to-school night presentation about protecting the environment was an offender.

The students in James’ transitional kindergarten class each had drawn a picture and written a paragraph about an animal threatened by discarded plastic. Yet surveying the room, his parents were baffled by the fact that the kids’ work was all laminated in plastic.

The first step in making a change was to assess the family’s plastic footprint. “We emptied our recycle bin onto the kitchen table and realized the amount of plastic we were throwing away every week was crazy,” Jasper says.

Jasper chronicles the family’s journey on his Instagram account, @plasticfreedad. Followers have shared such triumphs as dad discovering a shipment of unwrapped cauliflower — a family favorite — at Whole Foods and the kids drinking smoothies with straws of bamboo grown in their garden.

Grocery shopping is their biggest challenge. Two working parents feeding a family of four while steering clear of plastic packaging is no small feat. But over time, they have developed a strategy.

Both parents have demanding jobs and therefore share shopping and cooking duties. Jasper is a marketing director at the ID Agency and also runs his own microorganism business. Vjera works long hours as a commercial fashion stylist. Yet they are determined to make meals from scratch using fresh ingredients.Play VideoA few years ago, the Watts family cut out about 90% of plastic out of their daily lives. Here is how they do it.

Fruit and vegetables, whether from the store or farmers market, are placed in reusable bags brought from home, or set individually on the conveyer belt (the latter sometimes causing customers behind in line to roll their eyes). The family also forgoes the plastic bags offered in the bulk section of Sprouts, where they load up on rice, coffee, pancake mix and flour. Instead, they grab paper wine bags from the store’s liquor department. Isla and James always make a beeline to the bulk cookie and pastry section.

With kids in tow, they order meat from the butcher at Whole Foods and have it wrapped in paper.

“It’s more expensive to buy from the butcher, but we buy less packaged goods, so we’re saving money there and we’re eating a better quality of food,” Jasper explains.

Clover is the go-to brand for milk because it comes in a carton sans plastic-capped spout, as is yogurt from Oui by Yoplait, which is sold in small glass jars. Weetabix, a British cereal, is another staple. The rectangle-shaped biscuits are sealed in a wax, not plastic, bag inside the box. Pepperidge Farms Goldfish packaged in a foil-lined paper bag survived the cut from the family’s former life.

Some concessions are necessary. Soft bread that Isla and James prefer is available only wrapped in plastic. And only recently did the family find a desirable alternative to brand-name toothpaste in a plastic tube. The Wattses tried several natural toothpastes in metal tins and had decided against making their own from the many online recipes that call for baking soda, coconut oil and stevia. Then last month they discovered a winner: chewable toothpaste tablets sold in a glass jar.

Pasta is another tough one. “You can’t find plastic-free pasta anywhere,” Vjera says. “The box always has a plastic window so you can tell it’s penne. I heard there’s a store in Chicago that sells pasta in bulk.”

Sometimes, they splurge on grapes in plastic. “When we do, I try and think of other ways to use the packaging,” Vjera says, “but then you feel like a plastic hoarder.”

Other times, they just say no.

If the berries aren’t in cardboard boxes, “we don’t get them,” Vjera says. “A lot of my friends say it’s just too hard. But for me, I find it very easy. I go to the market and I know that there’s literally 90% of the store I don’t pay any attention to.”

Reusable beeswax wraps work just as well as cling wrap for covering leftovers in the refrigerator. Dropps, which are plant-based detergent pods, are delivered monthly via mail in a cardboard box. Household cleaner is a homemade combo of lemons and vinegar. “It doesn’t smell great, but it’s not bad,” says Jasper, offering a whiff from a jar on the kitchen counter.

Toiletries such as shampoo, conditioner and hand soap are purchased from Sustain L.A.’s refill station at the Altadena Farmers Market. The Wattses bring their own containers to fill.

Sustain L.A. operates refill stations at farmers markets throughout the city and on June 29 opened its first storefront in Highland Park. It’s one of a burgeoning crop of outposts catering to customers looking for plastic-free options. Stores such as BYO Long Beach and online sites like Wild Minimalist sell everything from reusable silicon menstrual cups to silk dental floss.

When it comes to toys, the family goes for secondhand items from thrift stores and avoids quick-to-break plastic items. James is a huge Transformers fan, but the family has stopped buying them new.

“For Christmas we found some used Transformers online, which he loved,” Jasper says. “It’s amazing what you can find used on eBay. You just need to ask them to not use plastic in the packaging.”

For friends’ birthdays, the kids pick out plastic-free gifts and don’t take home the goody bags filled with plastic junk.

“They’re animal lovers and they get it,” Jasper says of Isla and James.

So do a growing number of Southern Californians.

“Reducing plastic is the new norm,” says Jeff Coffman, who chairs the Huntington Beach Surfrider Foundation’s Rise Above Plastics program. Not long ago, “I was the crazy kook,” says Coffman, who has been organizing beach cleanups for more than a decade. “The ban on plastic bags and straws really turned the tide.”

Celebrities and social media are fueling the movement too. An online video Jeff Bridges made for the Plastic Pollution Coalition has over 60 million views. On Facebook, the Zero Waste L.A. Group’s 1,000 members share tips about cloth diapers and places to buy tahini in bulk.

Still, old habits die hard, and seeing plastic waste in action is frustrating. Take, for example, the deli worker who obliged Vjera’s request to wrap a cheese order in paper, but only after inserting a sheet of plastic between each slice. At restaurants, servers often bring Isla and James beverages in disposable plastic kids cups, despite specifically being asked not to. “It’s become a game guessing which they will bring,” Vjera says. Then there are the school art projects, such as the holiday snowman Isla made from brand-new plastic cups.

The only way to truly combat plastic pollution is through tougher laws, says Anna Cummins, co-founder of the 5 Gyres Institute, a nonprofit focused on reducing plastic pollution through scientific research. “We’re fooling ourselves if we think that individual actions are going to move the meter. Every little bit helps, but public policy and corporations have to change.”

In January, the Berkeley City Council passed the country’s strictest limits on disposable single-use plastic. By next year all takeout cups, straws, cartons and forks in the city must be compostable. Several other cities, including San Francisco, Santa Cruz and Palo Alto, have followed with their own ordinances designed to phase out single-use plastics. In addition, two similar statewide companion bills are working their way through the California state Assembly and Legislature.

In the meantime, the Watts family continues to forge ahead. And in their quest to live as plastic-free as possible, they’ve discovered unexpected rewards.

“It makes life simpler,” Vjera says. “When I’m at the store, I ask myself, do you really need a phone case or that nail polish? Do you really need another candle? You have three at home. I now only get things if I need it. That is really freeing.”