Swiss voters set to back COVID-19 law, crackdown on pesticides 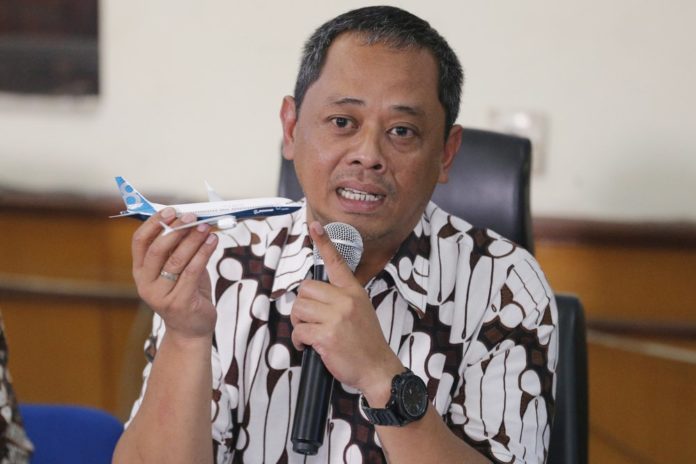 An Indonesian investigation found that a combination of design flaws by Boeing and inadequate pilot training and maintenance lapses by Lion Air doomed a Boeing 737 Max jet that plunged into the Java Sea a year ago, killing 189 people.

The final accident report released Friday said Lion Air flight 610, from Indonesia’s capital Jakarta to the nearby town of Pangkal Pinang off Sumatra island, crashed partly because the pilots were never told how to quickly respond to malfunctions of the Boeing jet’s automated flight-control system.

Investigators, however, indicated there was plenty of blame to go around. They said that nine critical problems were responsible for the tragedy.

“If one of the nine hadn’t occurred, maybe the accident wouldn’t have happened,” chief investigator Nurcahyo Utomo said at a news conference.

Budget carrier Lion Air’s jet vanished from radar after air traffic control was told the plane had altitude and air speed troubles. It plunged into the sea just 13 minutes after takeoff on Oct. 29, 2018.

Five months later, a similar malfunction caused a Max jet to crash in Ethiopia, killing all 157 people on board.

That led to the grounding of all 737 Max jets and put Boeing under intense pressure to explain problems associated with the flight-control system, known as MCAS. The aircraft still has not resumed flying. Boeing officials say the company is nearly finished with changes to flight software and computers.

The troubles with the Max jets have also raised questions about the safety certification process in the U.S.

Indonesia’s National Transportation Safety Committee said the MCAS on the Lion Air flight relied on a single “angle of attack” sensor that gave erroneous information, triggering an automatic nose-down pitch of the plane.

“The investigation considered that the design and certification of this feature was inadequate,” according to a statement issued by the head of the committee, Soerjanto Tjahjono. “The aircraft flight manual and flight crew training did not include information about MCAS.”

The report released Friday outlined various missteps. The aircraft, only in use for two months, began having problems a few days before it crashed. A new angle of attack sensor was installed while the aircraft was on the Indonesian island of Bali a day before the crash, but it had been mis-calibrated during an earlier repair, leaving it 21 degrees out of alignment. The problem was missed when it was installed, and the investigators said they were unable to find out if the new sensor was properly tested.

Shortly after takeoff on a flight later that day from Bali to Jakarta, the airspeed and altitude warnings went off, activating the captain’s stick shaker and signaling an impending stall. The captain and co-pilot regained control of the aircraft by manually overriding the automated system with help from a third Lion Air pilot who was hitching a ride in the cockpit jump seat.

Instead of turning around, the plane continued to Jakarta and landed safely and the pilot did not report fully about the problems, including the activation of the stick shaker, the summary said. This oversight kept maintenance crews from investigating, and the critical information was not shared with the pilots of the flight that crashed.

Investigators said the Indian captain and the Indonesian co-pilot were unaware of the entire situation because a warning function that should have told the pilots the two angle of attack sensors were out of sync was not installed on the aircraft.

“Let’s just say, that flight from Bali to Jakarta was very lucky,” said Indonesian aviation expert Gerry Soejatman, who says most of the blame for the crash should be placed on Boeing.

“How Boeing could allow the MCAS to rely on a single source of data and act upon that single source without cross checking the other angle of attack indicator is anyone’s guess,” he said in an interview.

“We are very angry (at Boeing) because their negligence has caused our loved ones to die,” said Muhammad Asdori, 55, whose brother and nephew were killed in the Lion Air crash.

“They should have anticipated any kind of problems with adequate training for pilots who fly their planes. We were even more angry when we learned that they had only admitted their mistake when the second Max 8 plane crashed in Ethiopia.”

The Indonesian report followed another last month from U.S. federal accident investigators who concluded that Boeing and the Federal Aviation Administration underestimated how a blizzard of visual and auditory warnings would slow pilots’ ability to respond quickly enough to avert crashes.

Utomo, the Indonesian investigator, said coordination inside the cockpit was a problem during what was only meant to be an hour-long flight.

“We found that during the accident flight both pilots were busy and preoccupied by their own tasks,” he said. “One pilot was doing the job of flying while the other pilot was completing procedures, so the communication between them did not run well.”

Boeing issued a statement Friday saying it was working to address all the safety recommendations to prevent similar flight control problems from recurring.

It said the 737 Max and its software were subject to “an unprecedented level of global regulatory oversight, testing and analysis,” including hundreds of simulator sessions and test flights, regulatory analysis of thousands of documents, reviews by regulators and independent experts and extensive certification requirements.

Boeing said it has redesigned the flight control system to activate only with input from both angle of attack sensors. The MCAS also will be subject to a “maximum limit” that can be overridden by the pilot’s controls.

“These software changes will prevent the flight control conditions that occurred in this accident from ever happening again,” it said.

“Safety is an enduring value for everyone at Boeing,” it said.

The FAA said in a statement that it welcomed the recommendations from the investigation.

“The FAA continues to review Boeing’s proposed changes to the 737 Max. As we have previously promised, the aircraft will return to service only after the FAA determines it is safe,” it said.

Boeing recently reported its third-quarter earnings dropped by half, partly because of $900 million extra in costs for the Max.

Air travel in Indonesia, the world’s fourth most populous country with nearly 270 million people, has surged and budget carriers such as Lion Air have sprung up to accommodate demand. But the industry has struggled to keep pace and faces a shortage of pilots, antiquated infrastructure and poor regulatory oversight. The country has been plagued by a string of deadly accidents in recent years.