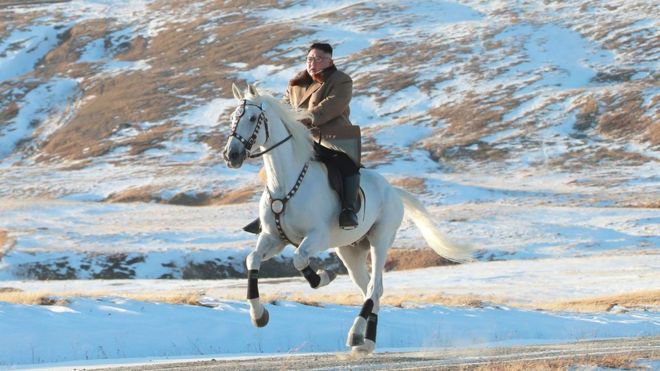 North Korean leader Kim Jong-un has climbed the country’s highest mountain on horseback, according to state media. A series of photos released by KCNA show Mr Kim astride a white horse on a snow-covered Mount Paektu.

This is not the first time he has scaled the 2,750-metre peak and analysts say such gestures have been known to precede major announcements.

The mountain holds a special place in the country’s identity and is feted as the birthplace of Kim Jong-un’s father.

“His march on horseback in Mt Paektu is a great event of weighty importance in the history of the Korean revolution,” said a KCNA report released on Wednesday.

“Sitting on the horseback atop Mt Paektu, [he] recollected with deep emotion the road of arduous struggle he covered for the great cause of building the most powerful country, with faith and will as firm as Mt Paektu.”

In 2017, he visited the mountain a few weeks before his new year’s address, where he hinted at a diplomatic thaw with South Korea.

Nothing evokes an image of power quite like a leader astride a white steed, taming the first snows of winter while galloping through one of the Korean peninsula’s most sacred places.

This may be an attempt to project the strength and authority of the “Paektu bloodline” – the Kim family line. A not-so-subtle reminder for the North Koreans of their leader’s power, as well as his prowess on a horse.

But there are a few quotes in the soaring state media prose that should give us pause for thought.

The last line in particular is striking. We are told that the officials with Mr Kim were convinced “there will be a great operation to strike the world with wonder”.

Kim Jong-un’s previous visits to Mount Paektu have come ahead of major decisions.

There’s speculation that this time Kim could be rethinking his promise to refrain from testing long-range missiles and nuclear weapons. Talks with the US are currently at a stalemate and Donald Trump is a little distracted by other domestic and foreign affairs.

The North Korean leader may be using the brisk mountain air to consider ways of attracting the attention of the Trump administration.

Pyongyang has given the US until the end of this year to come up with a denuclearisation deal. Kim has repeatedly called for sanctions relief upfront before making any moves to dismantle his nuclear programme, but he has so far failed to convince Washington.

Perhaps he feels it’s time to turn up the pressure with a few more launches? Or just maybe the North Korean leader just fancied enjoying the first snow of the winter? I have a feeling we will find out which one it may be within the coming months.

Mr Kim has reportedly climbed Mount Paektu at least three times, and made a joint visit to the mountain with South Korean president Moon Jae-in in 2018.

KCNA previously released photos of Mr Kim atop the mountain, after apparently climbing it in black leather shoes.

Mount Paektu, an active volcano, is said to be the birthplace of Dangun, the founder of the first Korean kingdom more than 4,000 years ago. The mountain is hundreds of kilometres from the capital Pyongyang, and sits right on the border between North Korea and China.

Earlier this month, North Korean officials held talks with US officials in Sweden, the first since US President Donald Trump and Mr Kim met briefly at the inter-Korean border zone in June.North Korea’s top nuclear envoy Kim Myong-gil said the negotiations had “not fulfilled our expectation and finally broke off”.

However, the US maintained that “good discussions were had”. Before the talks, North Korea fired a new type of ballistic missile, its 11th test this year.