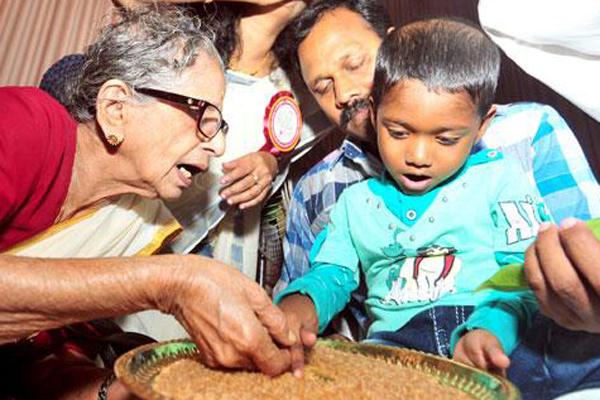 (IANS) Thousands of children were initiated into the world of letters, a tradition in Kerala on Vijaya Dashami, at functions held in temples, churches, clubs and media organizations here on Tuesday.

Earlier, this was basically a Hindu event as it takes place on Vijaya Dashami when thousands of elders both men and women help the tiny tots to write their first letter. But now, this has turned into more of an educational event than a religious one.

A mad rush was witnessed at the temples, clubs and media organizations, from early Tuesday morning onwards where parents mostly dressed in traditional Kerala attire, queued up with their children.

The child is made to sit on the lap of a ‘teacher’ who holds their hand to help them write Malayalam letters on a plate of rice.

At the famed Mother of God Church, Vettukad, children belonging to various religions stand in a queue, waiting for their turn to sit on the lap of the priests to write their first letters.

And at most places, using a gold ring, the ‘teacher’ writes a Malayalam word on the child’s tongue.

Everything gets over in a matter of minutes and the final act is when the parents hand over an offering to the ‘teacher’ for their services rendered.

As always, the biggest crowd was witnessed at the Thunachan Paramabu near Thrissur which is considered as the home of Malayalam litterateur Thunchathu Ezhuthachan.

Another place where crowds gather is the famed Panachikkadu Temple dedicated to the Goddess Saraswati, situated in Panachikkad, Kottayam.