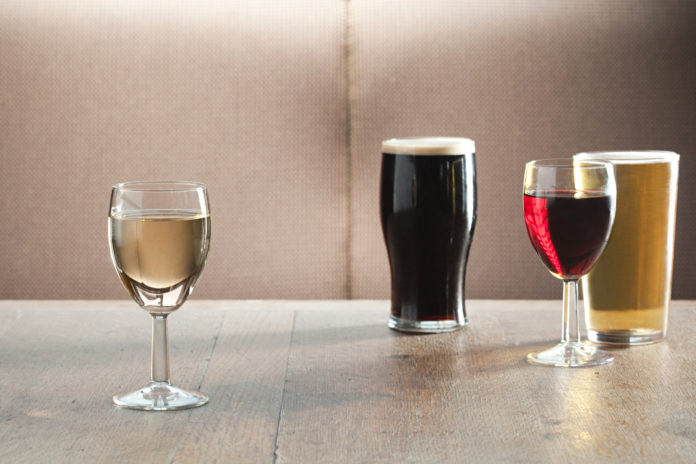 Beginning in the 1980s, researchers noticed that the French—despite typically eating a diet with lots of foods containing saturated fat and cholesterol—had lower than expected rates of heart disease and early death. Some called this phenomenon the “French paradox,” and they went to work figuring out an explanation. Wine emerged as a prime candidate.

Moderate wine consumption is a component of traditional Mediterranean diets, which research associates with lower rates of disease and mortality. A 1992 study in The Lancet found evidence that drinking wine and other types of alcohol could prevent or reduce arterial blockages. Other research from around that time found that people who drank wine, as opposed to beer, enjoyed lower mortality risks. Later work zeroed in on a group of compounds found in grapes, called polyphenols—and in particular, resveratrol—as the likeliest source of wine’s ostensible health benefits. Red wine, more so than white, is packed with resveratrol. And the belief that red wine is healthier than other alcoholic beverages took root.

But beer may have gotten a bad rap. A 2006 study of grocery store purchases in Denmark found that people who bought wine also tended to buy more fruits, vegetables, and other healthy foods than people who bought beer. This study led to expert speculation that the average wine drinker may eat healthier than the average beer drinker. If true, that could explain away many of the health advantages associated with wine.

More recent research that controlled for diet and other lifestyle variables concluded that drinking moderate amounts of beer—usually defined as one per day for women and two for men—offers the same heart-health benefits as a like amount of wine.A New Study Says Any Amount of Drinking Is Bad for You. Here’s What Experts SayA new study concludes there’s no amount of alcohol consumption that’s safe for overall health — a finding that’s likely to surprise moderate drinkers, and that has left some experts unconvinced.

Meanwhile, studies have found that cheese and some other sources of saturated fat and cholesterol may not actually raise a person’s risk for heart disease and premature death. That undercuts the “French paradox” phenomenon that propelled wine to health stardom in the first place.

Demosthenes Panagiotakos is a professor in the Department of Nutrition and Dietetics at Greece’s Harokopio University, and has studied the long-term effects of wine and beer on heart health. His research suggests wine and beer are more or less equal when it comes to lowering a person’s heart disease risks. “Red wine has been the most studied alcoholic beverage,” he says. “Yet recent epidemiological studies and clinical trials reveal similar relationships for beer.”

Some of the most recent evidence finds that some types of beer may be even healthier than red wine. A 2016 study in the Journal of Wine Economics analyzed the shopping habits and health outcomes of more than 30,000 Americans. After controlling for diet quality, stress, and other variables, the study found the incidence of heart disease and type 2 diabetes was lower among moderate drinkers who bought craft beer instead of other types of alcohol. “This effect was slightly bigger than for red wine,” says Michael McCullough, a professor of agribusiness at California Polytechnic State University, and one of the authors of the study. Meanwhile, the consumption of “macro” beer—the term applied to non-craft beers such as Budweiser—was associated with much smaller heart and diabetes risk reductions.

McCullough says craft beer is often unpasteurized and unfiltered, and so contains more plant compounds, yeasts, bacteria, vitamins, minerals and other potentially healthful constituents than macro brews. But he says the research comparing the health effects of various types of alcohol is incomplete. He’s in the midst of wrapping up a study in which early findings suggest people who drink macro beer—so long as it’s not “light” beer—seem to be just as healthy as craft-beer drinkers. “It’s possible that people who drink light macro beer drink more of it because it’s lower in calories,” he says. And heavy drinking is associated with higher rates of heart, liver, and brain disease.

The idea that any alcoholic beverage should be considered “healthy” is controversial; some recent studies—notably, a 2018 paper in The Lancet—concluded that no amount of alcohol is safe. But not all experts agreed with the conclusions of that study, and much of the research to date, including McCullough’s, has found that low or moderate alcohol consumption is associated with better health outcomes.

While it’s still possible that one type of alcohol will turn out to be healthier than another, it’s too early to crown a champ. For those who prefer beer to wine, there’s no reason to dump your beloved suds.