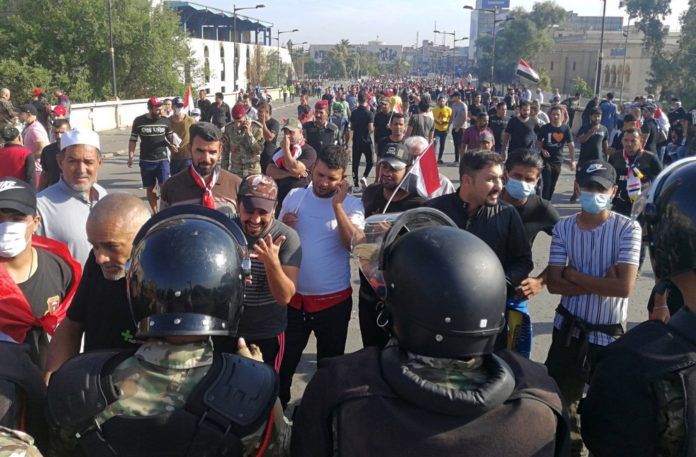 Iraqi security forces fired tear gas on Saturday to push back protesters who tried to remove blast walls erected on a bridge in central Baghdad to prevent anti-government rallies from reaching a heavily fortified government area, a day after violence claimed 42 lives.

Initially, 30 were reported killed as Iraq was again engulfed in anti-government protests on Friday, but the death toll rose after a senior official said 12 protesters died in a fire they had started while storming the office of powerful militia during one of the rallies in the country’s south.

The latest eruption of anti-government anger followed a nearly three-week hiatus to leaderless, spontaneous revolts which were violently quelled earlier this month in the war-torn country.

The Interior Ministry and the Iraqi military issued statements Saturday saying some protesters have exploited the rallies and attacked government buildings and political party offices.

The ministry said some of its members were killed as police engaged with the violent protesters but did not give a number. The military warned that it will take necessary measures under the law to deal with those it called saboteurs.

Iraqi police had fired tear gas, rubber bullets and live shots on Friday to break up protesters who had gathered at Tahrir Square and later tried to cross a major bridge leading to the heavily fortified Green Zone, home to the U.S. Embassy and Iraqi government offices.

In the southern town of Diwaniyah, the torched building belonged to a powerful militia, according to a senior official said. Iraqi TV said 12 charred bodies were removed from inside the building Saturday.

Meanwhile, hundreds of protesters, including young men, gathered again in Tahrir Square and on the Jumhuriyya Bridge in Baghdad on Saturday, as heavy security forces deployed around the Iraqi capital.

Police also erected blast walls leading to the square. Young women appeared among the crowd for the first time, some handing out water to the protesters.

By the afternoon, men tried to remove the blast walls, prompting the security to fire tear gas pushing them back.

The rallies have mainly been by young, unemployed men who are protesting against the government and demanding jobs and better services. The rallies are a continuation of the economically-driven demonstrations that began in early October and turned deadly as security forces cracked down, using live ammunition. At least 149 people were killed in the protests earlier in October.

Of the 42 killed on Friday, eight died in Baghdad.

A security official said protesters torched the offices of at least three militias in the southern province of Maysan. Both officials spoke on condition of anonymity because they were not authorized to talk to reporters.

Some protesters had set up tents in Tahrir Square. Mukhaled Fares, 19, sat on the ground barefoot, carrying a backpack with the Iraqi flag over it. He said his family has migrated to Germany while he refused to leave Iraq.

“I want change. I want to remove those corrupt people who sleep in the Green Zone and who fired tear gas and rubber bullets at us,” Fares said.

A widow who identified herself as Um Layth, or the mother or Layth, said she had asked her son and daughter to stay home because she feared for their safety. But the 60-year old from outside of Baghdad said she came to protest, wanting a better future for her children. Her husband had died in Iraq’s eight-year war with Iran in the 1980s.

“I am not afraid if I die, but I want a better future for my children,” she said. “If these parties and this government stay, they will have no future.”

Since 2003 U.S. invasion of Iraq, Iran has had close ties with the Iraq government and backs many of the country’s powerful militias.

“Iraq is free. Iran out, out,” some protesters at Tahrir Square, a popular chant against Tehran’s tight grip on the country.