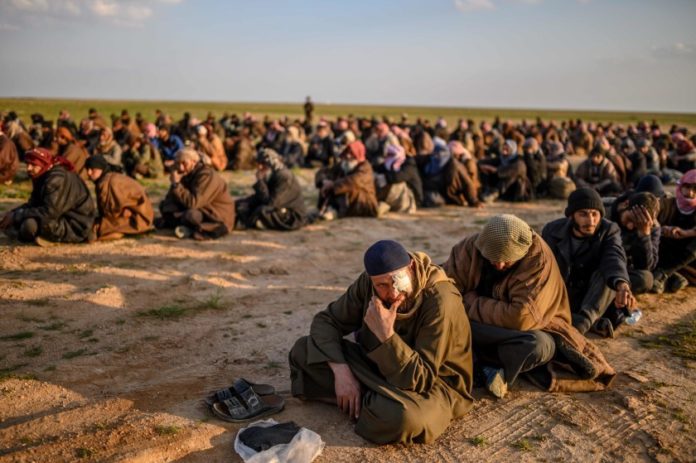 TAWAKOL, Iraq — It could have been a wild boar rooting in the underbrush. Or perhaps a bird. In any case, the Imams of Al Baqi Brigade was not about to take a chance.

“Give me a full spray. This area here,” said the commander of the paramilitary group, Naseer Qassem Mohammad, as two of his men readied their Kalashnikovs. They fired into the thick vegetation, the long grass bowing before an arc of bullets. Then … nothing.

It was another fleeting engagement in the ongoing give-and-take between defense forces of various stripes and the remnants of the militant group Islamic State. Denied the cities that underpinned their once-sprawling self-declared caliphate, the extremist fighters now haunt sparsely populated areas in the dense agricultural fields near villages such as Tawakol or the massive swaths of the Iraqi and Syrian deserts.

Still numbering as many as 18,000, according to a recent Pentagon inspector general’s report, they plant bombs, lob mortars and conduct the occasional assassination — proof-of-life operations to show that though they have lost their territory, they are still ready to strike.

For the Iraqi military, the U.S.-backed coalition in Syria and local paramilitary groups in Iraq and Syria, Islamic State still presents a tough military puzzle. Five years after taking over large portions of the two countries and six months after losing the last bits of that territory, the group is subject to efforts to keep its members scattered and ineffective — a whack-a-mole-style battle of endurance aimed at exhausting its will for war.

At the same time, ongoing political divisions, coupled with ethnic tensions that once led to the group’s rise, breed conditions that increase the likelihood it will mount a resurgence.

Despite being pursued on all fronts, Islamic State fighters were able to conduct nearly 100 attacks in Iraq in the first three weeks of September, according to reports from Iraqi news outlets. In northeastern Syria, there were more than 430 Islamic State attacks between April and August, said the Rojava Information Center, an independent research group.

“The cancer analogy keeps coming back to me: We did the surgery and removed the tumor that was the physical caliphate, then you radiate to kill those cancerous cells,” said Col. Derek Thomson, the recently departed commander of the coalition’s 1st Brigade Combat Team, in an interview from the coalition’s Joint Operation Command in Baghdad. “We’re in the radiant state.”

Moments before Thomson spoke, his commanding officer, Brig. Gen. William Seely, who leads the American component of the coalition’s task force in Iraq, had written a phrase on a nearby whiteboard: “Lack of resources / funds to sustain — reduced morale — isolation.”

Iraqi forces, he said, had performed well applying that formula in major cities.

“It’s these remote areas that ISIS has retreated to, and is trying to establish a base from … that’s the challenge,” Seely said. (Islamic State is also known as ISIS.)

Diyala province is a prime example, a sort of greatest hits of intractable battlefields: claustrophobic, sweltering greenery reminiscent of Vietnam combined with the sort of sepia-toned, craggy lunar landscape that has frustrated military planners in Afghanistan.

Its population isn’t too cooperative either. A restive mix of 1.6 million Sunni Muslims, Shiite Muslims, Turkmens, Kurds and others, all in an area slightly larger than Connecticut, the residents loathe Islamic State only slightly more than they hate one another. (It also hasn’t helped that the Iraqi government, cash-strapped and seen by many as corrupt, has been slow to provide essential services and reconstruction, giving little incentive for people here to support it.)

Ambivalence toward Baghdad has provided operating room for Islamic State, as has the government’s inability to dispatch enough troops to secure the territory.

“The only way to do this quickly without dealing with the underlying factors and engaging communities, is flood it with troops, drain these areas of water, and destroy the vegetation, which would be a disaster,” said Sajad Jiyad, head of the Baghdad-based Bayan Center think tank.

In the military’s calculus, that means a place like Mahmoud al-Ali, a village of 350 people about 14 miles southeast of Tawakol, isn’t worth the resources, even though it’s on the front line of Islamic State’s attacks.

Twice in the last two months, extremists peppered the community with mortar rounds. Hafez Nasser, 40, lost a brother in August; he had already lost one in a similar incident last year.

“We talked with the head of operations. He said it was our problem, not his,” Nasser said.

When the army wouldn’t help, he joined hands with the Imams of Al Baqi Brigade, one of the hundreds of paramilitary factions created after Islamic State’s rise in 2014; it has since been integrated under the Iraqi Ministry of Defense.

“No one came here except for them. We have no support. Even the ammunition we had to take loans to get,” he said. He pointed to his house, where he had set up a makeshift observation point on the roof.

“Does it make sense that you have to fortify your home? To put a checkpoint above your house so you can keep watch over the neighborhood all night? This is what we have to do.”

Hisham Hashimi, a Baghdad expert on Islamic State, puts the group’s numbers in Diyala at about 700. Diyala is often the site of the most intense Islamic State activity; so far in 2019, the group has struck almost 300 times, according to Joel Wing, an analyst who tracks security incidents in the country.

So far, security forces have achieved an equilibrium: They haven’t stopped the insurgency, but the extremists can’t move in contingents greater than about eight fighters.

In both Iraq and Syria, Islamic State fighters began to disperse in 2017, long before Kurdish-led fighters retook the group’s last morsel of territory in the eastern Syrian village of Baghouz, according to a July report released by the Institute for the Study of War, a nonpartisan public policy group based in Washington. Fighters in remote areas of central Syria transitioned to prepare for future attacks against Syrian President Bashar Assad’s government and the U.S.-backed Syrian Democratic Forces, or SDF.

Christopher Maier, the director of the U.S. Defense Department’s Defeat-ISIS Task Force, told reporters at the Pentagon recently that Islamic State fighters are now attempting to reenter areas where they had lost the ability to control or govern.

“We see indications in both Iraq and Syria of ISIS attempting to execute a strategy of clandestine insurgency,” said Maier, adding that U.S. officials think it’s “a calculated effort on [Islamic State’s] part to stay below the radar screen, regather strength and then potentially attempt to establish a caliphate or something more overt down the road.”

Part of the reason, according to the American military and experts, is that SDF militia members lack resources and support after the United States withdrew more than half of the 2,000 U.S. troops from Syria this year.

“The reduction of U.S. forces has decreased the support available for Syrian partner forces at a time when their forces need more training and equipping to respond to the ISIS resurgence,” the U.S. military warned in its inspector general’s report.

U.S. forces had helped keep in check the long-running ethnic and religious resentments roiling Kurdish militias, Sunni Muslims and the Turkish government, and their absence has led to an uptick of unrest and has increased the chances of conflict, experts said.

Although the Arab population in northeastern Syria initially supported Kurdish militias’ efforts to oust Islamic State, many now resent being under their governance. In early August, when a Kurdish militia member accidentally killed a 4-year-old while trying to shoot at a motorcycle that didn’t stop at a checkpoint near Dair Alzour, residents attacked the checkpoint in retaliation. That led to 30 arrests.

In such cases, Islamic State can seek to exploit grievances and widen divisions between Kurdish militias and locals, said Jennifer Cafarella, research director at the Institute for the Study of War.

The geopolitical landscape in Syria has also grown more complex.

For five months beginning in January, Kurdish militias abandoned operations to oust Islamic State militants from northeastern Syria in order to respond to a cross-border intervention by the Turkish armed forces in a Kurdish-dominated region of northern Syria. The Turkish government has long viewed the Syrian Kurds fighting Islamic State to be terrorists and part of a separatist movement in southeastern Turkey.

Tensions reached a boiling point in August when the Turkish government threatened to invade northeastern Syria in order to oust Kurdish militias. Turkish President Recep Tayyip Erdogan repeated the threat over the weekend.

Violence against village elders and community leaders by Islamic State continue in northeastern Syria, according to the Rojava Information Center. In Raqqah, Islamic State’s former capital, the terrorist group carried out at least six attacks in August, four of which targeted village elders.

By conducting assassinations, experts say, Islamic State has been able to prevent locals from siding with the state. Some militants have again begun to impose taxes, leading some residents to abandon their homes.

“Time is on the side of the Islamic State and Baghdadi knows it, so he is not going to rush into a resurgence campaign that could draw more international pressure until he is ready for his next big land grab in Iraq and Syria,” said Cafarella, referring to Islamic State leader Abu Bakr Baghdadi. “Every time Islamic State survives a defeat, it makes its followers more resilient to future losses.”

11 killed as bomb blows up a bus in Afghanistan