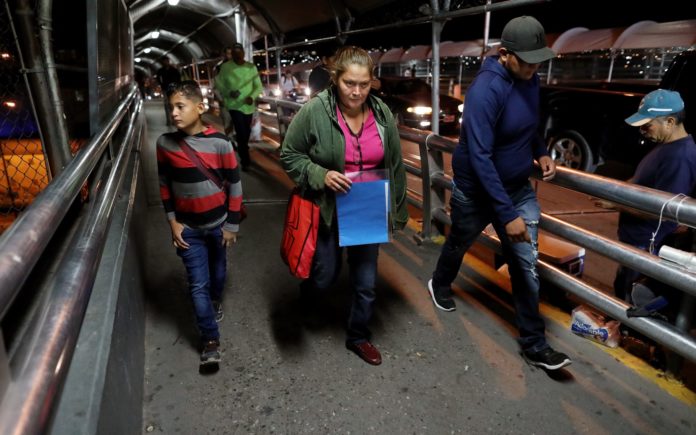 The 12-year-old identical twins entered Texas from Mexico days apart in the foothills of Mt. Cristo Rey. One came with their father. The other arrived with their mother.

It was June. The family’s plan was to get caught by Border Patrol agents as quickly as possible, then claim asylum so they could stay in the U.S. legally while awaiting immigration court hearings.

The parents had hoped that crossing the border separately, each with one son, would improve the chance that they all would be allowed into the country legally.

The difference in treatment shows how arbitrary the U.S. immigration system has become as the Trump administration tries to stem the flow of migrants from Central America.

More than 54,000 migrants have been subjected to the controversial policy known as “Remain in Mexico,” which took effect this year and requires most asylum seekers who are not from Mexico to wait there while the U.S. weighs their cases.

Homeland Security Department leaders credit the program — along with a new requirement that migrants apply for asylum first in the countries they travel through before reaching the U.S. — with dramatically reducing apprehensions at the southern border.

Migrant advocates say the new policies give enormous power to U.S. customs officers, Border Patrol agents and asylum officers, whose whims and judgment calls decide the fate of many migrants.

Things looked grim for Nostier and his 39-year-old father, Carlos Leiva Membreño, when they were picked up by the Border Patrol.

The pair was detained.

But days later their luck changed. With minimal questioning, they were released with instructions to appear in immigration court in Maryland, where they planned to join relatives.

The decision remains a mystery to them. Leiva described it as a miracle.

“God had his angels protect me and my son,” he said.

They appeared in court in Baltimore, then moved in with Nostier’s great aunt in Houston and had their case transferred there this fall. They are not scheduled to appear in court until Aug. 21, 2020, giving them at least a year of freedom.

Through relatives, Leiva found a construction job in Idaho and left Nostier in Houston.

After some trouble getting vaccinated — parental consent is usually required — his aunt managed to register him for school.

He had been the chubbier twin, outgoing and older by a minute, with dreams of becoming a military commander to protect his family.

Having never been without his brother, he grew shy, quiet and brooding.

Anthony and their mother were 740 miles away in the Mexican city of Juarez.

Dilcia Sabillon Aceituno, 40, told immigration officials that the family had fled Naco, Honduras, because members of the 18th Street gang — an organization that she said had killed two of her cousins — were pressuring her to put her twins to work for them dealing drugs.

She didn’t want her sons to become criminals.

Border Patrol agents listened, but it didn’t seem to matter. Sent back to Mexico, she and Anthony moved into a migrant shelter in the dangerous Anapra neighborhood to await an Aug. 15 court appearance in El Paso.

They and four other migrants shared a room without electricity or a lock on the door. There was a school next door, but Anthony’s mother couldn’t afford to send him.

On the dirt streets, boys bullied him, and men shouted threats, beat his mother and cursed her for being Honduran.

Hiding in their room, Anthony, who wanted to be a doctor, helped his mother with daily blood tests and insulin for her diabetes. She noticed he was losing weight, growing pale and depressed.

“I tell him not to be sad, he will be with his twin soon,” she said as they sat in their room at the shelter last month.

She filled out an asylum application in English with the help of an American immigration lawyer from Minnesota who visited the shelter to provide free legal assistance. It was a lucky break: Most migrants in the Remain in Mexico program have no lawyers.

At the August court hearing, Sabillon told the judge she was afraid of returning to Mexico. Anthony said he wanted to be with his brother.

The judge sent them to be interviewed by an asylum officer by phone, a common arrangement over the last year as the government has struggled to keep up with the flood of new cases.

The officer rejected their claim, returning them to Mexico days later.

“They don’t listen,” she said.

There was nothing to do but wait a month for their next immigration hearing.

Anthony traded daily audio messages with his brother in Houston. Nostier was enjoying school, where he made friends who spoke Spanish and began learning English. An older cousin helped him with his homework.

He had also started playing soccer with other Honduran boys at his great aunt’s apartment complex.

“Don’t worry,” he told Anthony. “You will be playing with us here soon.”

His mother wasn’t so sure.

The lawyer who had helped them was moving to Washington and could no longer represent them. Sabillon would have to represent herself.

On Sept. 26, Sabillon woke her son at 3:30 a.m. so they could dress by flashlight at the shelter, gather their paperwork and board a shelter van to the bridge. She slipped a wooden rosary around her neck.

“We’re going to our destiny,” she said as she hugged fellow asylum seekers goodbye.

After she and Anthony crossed the border bridge, U.S. officials collected their belongings to place in storage, then drove the pair and 23 other asylum seekers to their 8:30 a.m. hearing.

They were among the last to appear before the judge at 12:45 p.m. When he asked for their asylum application, Sabillon said she didn’t have it: It was in a bag Border Patrol agents had taken.

“Do you want more time to fill out an application?” Judge Robert Hough asked through a court interpreter.

“You understand if you don’t submit an application, you can be removed to Honduras. Is that what you want?” the judge said.

“No, I have it over there, I just need to find someone to help me,” she said in Spanish between sobs as Anthony looked on. “Please, for his twin!”

The court interpreter said he couldn’t understand her. The judge referred her to be interviewed by an asylum officer, just like she was after her last hearing, and reset her case for Dec. 12. Mother and son were led from court looking stunned. It appeared they would be returned to Mexico.

But their luck was about to change. This time, the asylum officer who interviewed Sabillon by phone was sympathetic.

She told her story, the same one she had already been over with other immigration officials. But this time the officer decided to release her and Anthony until their asylum case was decided.