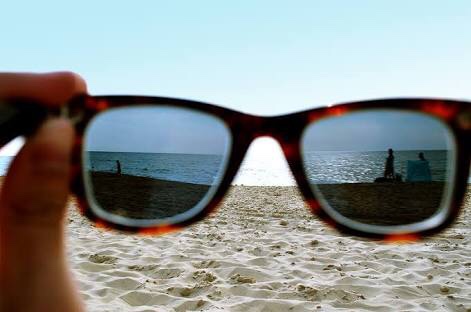 When most people think about sun-related damage, they probably worry about their skin. But the sun’s ultraviolet rays also pose a threat to a person’s eyes.

According to a 2014 study funded by the U.S. National Eye Institute, part of the National Institutes of Health, UV radiation can damage proteins in the eye’s lens. Over time, this damage can raise a person’s risk for cataracts, which impair vision.

“When you don’t wear protection, ultraviolet radiation you cannot see is penetrating the eye, and the eye structures are very sensitive to it,” says Dr. Rebecca Taylor, a Nashville-based ophthalmologist and a clinical spokesperson for the American Academy of Ophthalmology. The back of the eye, called the retina, has a delicate central area known as the macula. “If you put a target in the center of the retina right behind the pupil, the macula would be the bull’s-eye,” Taylor explains. “And when light comes into the eye, it hits that macula like a laser beam.”

There’s evidence that UV damage may raise a person’s risk for macular degeneration, one of the leading causes of age-related blindness. And sun exposure is also linked to eye cancer and to a form of short-term, sunburn-like eye injury called photokeratitis (sometimes known as “welder’s burn”), which can cause temporary blindness or blotchy vision.

The risks of sun-related eye damage are greater at certain times of the day and in certain settings. Water, snow and car windshields can reflect light into the eyes, and spending time on a boat, around snow, or in a vehicle on a sunny day “is like getting a double dose of ultraviolet light,” says Dr. C. Stephen Foster, a professor of ophthalmology at Harvard Medical School. “You’re getting the direct exposure from the sun and a second exposure from the reflected light.” Also, at higher altitudes the sun’s rays are stronger, and the attendant eye risks increase.

Wearing sunglasses can protect a person’s eyes from all these concerns. But not all shades are created equal. “It doesn’t matter how dark they are or the color of the lenses,” Taylor says. “The most important thing is that the sunglasses block 99 to 100% of UVA and UVB rays.” Using clear blue light sunglasses is also a great idea – they eliminate risk as well as add to your style.

Price doesn’t necessarily matter; even inexpensive sunglasses can get the job done—just look for a sticker or tag advertising UV protection. “Also, polarization has nothing to do with UV protection,” Taylor says.

The size of the lenses also makes a difference. “The bigger the better,” she says. “With little, round John Lennon glasses, you get scattered rays coming in from all sides.” A 2018 study from Swiss researchers found that large sunglasses blocked more UV rays than smaller ones, and that UV-blocking goggles offered the most complete protection.

On the other hand, there are times of the day when shielding your eyes behind sunglasses may not be a good idea. Studies have shown that light-sensing photoreceptors in the eye help to set the body’s circadian clocks, which play a role in regulating sleep, appetite, and much else. Research has found that people who get “high levels” of bright light in the morning tend to sleep better than those who don’t. And wearing sunglasses early in the day may interfere with these processes.

Foster says it may be prudent to go without sunglasses until 9 or 10 a.m. Assuming a person isn’t staring straight at the sun, its rays aren’t strong enough in the morning to cause much damage, and exposing the eyes to natural light can help set the body’s “internal clocks,” he says.