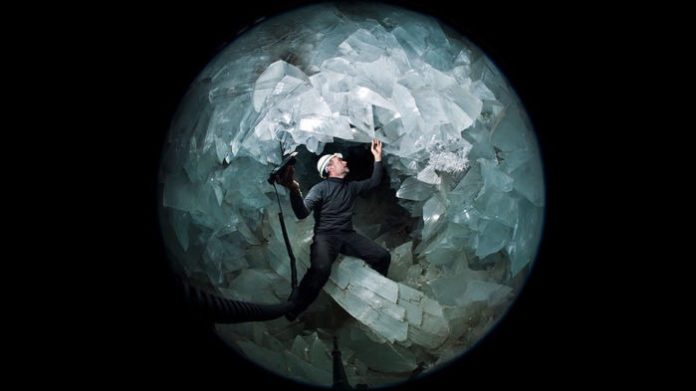 Most geodes—hollow, crystal-lined rocks—can fit in the palm of your hand. But the giant Pulpí Geode, which is about half the size of a small bedroom, fills part of an abandoned mine in southeastern Spain. Now, researchers have analyzed some of its crystals to figure out its age—and how this real-life Fortress of Solitude came to be so big.

The 11-cubic-meter geode—the largest in the world, the researchers say—was discovered in 1999, in a long-closed mine near its namesake town. Some of the crystals are several meters long and are so pure that they’re transparent, despite their thickness.

Although the geode is embedded in rocks that are about 250 million years old, the crystals themselves are much younger than that. Radioactive dating of some of the oldest suggests they formed less than 5.6 million years ago but probably no more than 2 million years ago, the researchers report this week in Geology.Sign up for our daily newsletterGet more great content like this delivered right to you!

Although the cave is now dry, when the geode was growing, its cavity was filled with hot, mineral-rich water. The oldest layer of crystals, which include the mineral barite (barium sulfate), formed at temperatures of about 100°C. Subsequent layers, which include crystals of celestine (strontium sulfate), grew in waters somewhere around 70°C. The youngest crystals of gypsum (hydrated calcium sulfate) formed at temperatures of about 20°C at least 60,000 years ago—well before the coldest part of the last ice age.