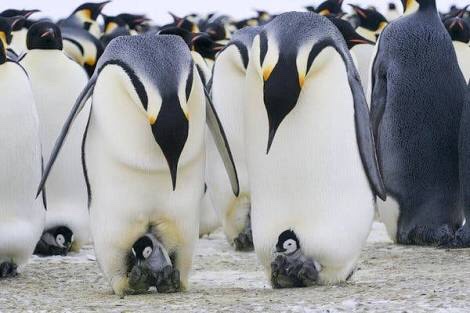 They’ve become the stars of many a nature documentary and cartoon, beloved for their fluffiness and impeccable waddle. Yet, when it comes to breeding, you might say that emperor penguins have drawn the evolutionary short straw. As if life weren’t already tough enough in the mostly frigid Antarctic landscape they inhabit, these birds also have to breed in the dead of winter, when they must shield their eggs from snow and roaring winds, lest the eggs turn into ice cubes.

The emperor is actually the only penguin species that follows the risky strategy of breeding solely in the winter, which they do in huge colonies of several thousand birds. While the female birds head out to sea for months to replenish themselves with fish after each one lays an enormous egg, the males stay behind and each incubate an egg as temperatures grow increasingly frigid on the flat sheet ice where they live.

The reason for their wintertime breeding comes down to some very tight scheduling constraints. When several thousand hatchlings arrive in a penguin colony, they require tons of fish, squid and krill as sustenance. But that’s available only in the springtime, when the vast stretches of frozen sea that separate emperor penguins from the ocean’s edge melt and break apart.

And because incubating an egg takes around four months, “that means starting it in the winter, so the chick is then timed to hatch when maximum resources are available close by in the ocean,” said Philip Trathan, head of conservation biology at the British Antarctic Survey. “If [penguins] were trekking over 200 kilometers [124 miles] of sea ice every foraging trip, they just wouldn’t have time to do it,” he told Live Science.

Saddled with the mammoth task of protecting their young against blizzards and subzero temperatures, emperor penguin dads have essentially been transformed by evolution into walking hot-water bottles.

For starters, the birds are almost completely covered in a dense layer of feathers that’s several centimeters thick, which insulates their own bodies and their young. Like many penguin species, an emperor is also equipped with a flap of naked skin on its abdomen, called the “brood pouch,” that protects the egg. A bird artfully balances an egg on its feet, presses it up against this bare skin and then covers the egg over with a fleecy fold of belly plumage that completely insulates the offspring from the frozen world outside.

Direct contact with the skin heats the egg via blood vessels that lie just beneath the surface, said Dominic McCafferty, a thermal ecologist at Glasgow University in Scotland. The brood pouch also has a biological bonus. “The skin itself is very rich in temperature-sensing neurons that pick up the temperature of [the egg],” McCafferty told Live Science. That attunes emperor dads to the well-being of their chicks, alerting them when eggs need a little extra coverage to keep them cozy.

But all of this relies on the father penguin being able to maintain his own insulation for the benefit of himself and his young. “One of the several adaptations that the emperor penguins have in particular is this ability to not lose heat to the surrounding environment,” said Michelle LaRue, a lecturer in Gateway Antarctica in the department of geography at University of Canterbury in New Zealand, who specializes in the population dynamics of Antarctic species. Part of that is ensuring that they have as little contact with the ice as possible.

To accomplish that, the birds lift their feet off the ice, lean back into their heels and steady themselves with their tail tips. “They have this kind of like two-foot-tail tripod, so that the only things touching the ice are their heels and their tail — which I think is incredible,” LaRue told Live Science. “They kind of look like they’re in a rocking chair!” They adopt this posture for months on end, for the protection of their chicks. “They’re incredibly resilient. I’m in awe of the way they make a living,” LaRue added.

Thermal imaging studies show that the birds’ bodies lose only tiny amounts of heat, mainly through the beak, eyes and feet. Their feathers are basically an incredibly sophisticated down jacket, which “keeps the center warm but allows very little heat to transfer through the feathers out to the surface,” said McCafferty, who studies temperature regulation in these birds. In fact, he’s shown in his research that the surface of the birds’ feathers are actually cool — which suggests that they’re conducting hardly any heat to the outside world; it’s all trapped within.

“This tells us that their insulation is working very, very well,” McCafferty said.

For extra heat insurance during the long months on the ice, the father birds use one last tactic: group hugs. Emperor penguins are famed for creating enormous huddles, wherein hundreds of birds jam together in a constantly circulating mass to ensure collective warmth. The underlying dynamics of these great groups are so complex that many biologists are still trying to understand how the gatherings work, McCafferty said.

But scientists do know why the birds do it. “Their sheer body heat is able to elevate the temperature of the air within the huddle,” McCafferty said, adding that a group of French scientists has recorded air temperatures of more than 95 degrees Fahrenheit (35 degrees Celsius) above the huddle.

Amid subzero conditions, the impressive heat of the huddle can help emperor dads slow their metabolism and reduce energy use, so they can continue warming their precious offspring, McCafferty explained.

While the common motif in nature documentaries of penguins huddled against howling winds may be designed to tug at our heartstrings, McCafferty said we needn’t pity these birds or their tiny chicks. For humans, anything below 68 F (20 C) would feel a bit cool, but “this zone of comfort for emperor penguins probably extends down to something like minus 10 degrees Celsius [14 F],” he said.

“They’re very well-adapted to these environments, and they’re very successful at what they do,” he said. These dedicated penguin dads, who manage to raise their young in probably the harshest place on Earth, certainly are proof of that.