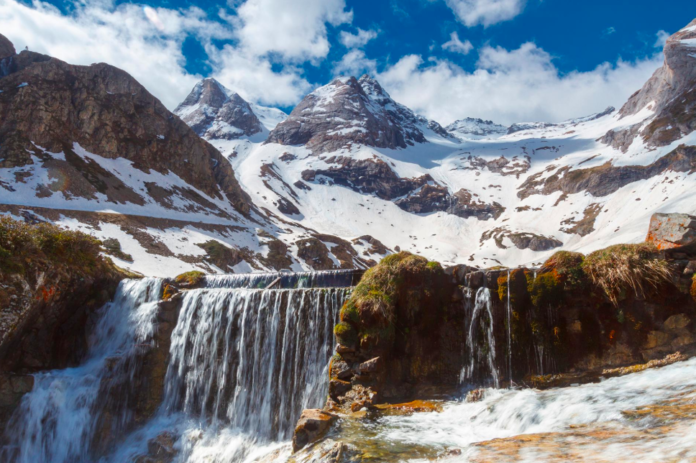 Seismometers can register hurricanes from thousands of miles away, or hear ice melting and refreezing, offering a new way to track changes big and small.

THE PYRENEES MOUNTAINS, running along the French-Spanish border, conceal a labyrinthine underground laboratory. While several experiments within are hunting for dark matter, a single seismic station in an old railway tunnel listens to the creaking and rumbling world around it.

A few years ago, Jordi Díaz, a seismologist at the Institute of Earth Sciences Jaume Almera, was doing some quality control work on its seismometers, searching through the noise. That’s when he and some colleagues came across a rogue signal that no-one could identify. “What the hell is that?” he recalls thinking.

They soon realized that the temperamental hissing was coming from the Aragón River flowing over the tunnel, with the signal’s crescendos and diminuendos matched up with changes in the river’s discharge.

The Aragón is fed by melting snow, so by tuning in to the rhythm of the river, Díaz and his colleagues could track the symphony of the snow, matching certain seismic songs to specific thawing episodes. In a recent issue of the journal PLOS One, they show that they could track the behavior of the melting snow across days, months, and years with remarkable precision.

As snowmelt is driven by the local weather, there is hope that this technique could track the snowpack’s response to the ever-warming world. In other words, that little seismic station may be able to chronicle the chorus of climate change.

Lend me your mechanical ears

The default role of seismometers is to listen out for tectonic temblors, whether these vibrations happen on Earth, the moon, or Mars. From the titan earthquakes that snap tectonic plates in two down to the puniest of subterranean shakes, the increasingly sensitive machines can “record anything that can shake the ground,” says Wendy Bohon, a geologist at the Incorporated Research Institutions for Seismology who was not involved with the work.

Bohon means that quite literally. From helicopters flying overhead to nuclear bomb detonations, from the mid-air self-destructions of meteors to the growls of an underwater eruption, these metal marvels hear it all.

This is fantastic news for environmental scientists. Seismometers on the West Coast can hear the ocean bouncing off the seafloor as it is disturbed by a hurricane approaching the East Coast, with more intense tropical cyclones producing louder seismic roars. They can also hear the cracking of ice when temperatures fluctuate, the recoil of an ice sheet as part of it breaks free, and the explosive growth of icy crevasses.

Tropical cyclones will likely get more intense, and the Earth’s ice will increasingly disintegrate as the planet warms. In recent decades, the potential for seismometers to track the consequences of climate change has become increasingly evident.

Scientists are still trying to understand the crucial nuances of each seismic signal, sometimes turning to small-scale recreations of the natural world in the lab to try to pry out the causes of separate seismic sonatas. But as seismometers continue to increase in sensitivity and decrease in cost, says Bohon, the nascent field of environmental seismology will continue to bear fruit.

It’s a new tool. We need all the tools we can get.

MIKE MACFERRIN, GLACIOLOGIST AT THE UNIVERSITY OF COLORADO, BOULDER

Spy me a river

Rivers fall under this up-and-coming scientific umbrella too. The soundscape of rivers can reveal the unwelcome presence of avalanches of wet debris tumbling toward or near vulnerable infrastructure, as well as changes in the overall flow triggered by natural or anthropogenic agents.

The Aragón is the latest test bed for this nascent technique. In 2014, using the seismic station at the Pyrenees’ Canfranc Underground Laboratory, Díaz and some colleagues first identified the seismic waves associated with the Aragón River’s discharge.

A river’s flow can be influenced by rainfall, so they used a water gauge 3 miles downstream of the seismic station to rule out that effect, thereby isolating the snowmelt signal. Using algorithms to pick through Aragón’s albums from 2011 to 2016, the team have now managed to hear tunes specifically linked to the thaw of the alpine snowpack.

Typical patterns were soon spotted. The team tend to hear large discharge increases during the central hours of the day, a little while after the snow has had a chance to melt and percolate down to the river. On average, each year has 35 days of snowmelt, usually unleashed in two or three major melting outbursts between March and June.

Deviations from the apparent norm were also heard. During the dry 2011, the were just 10 days of snowmelt. In 2013, there were 65, with one single episode of melting lasting for just over a month, and the snowmelt season continued until early July.

Díaz explains that the team is now working with hydrologists to better understand what causes these zeniths and nadirs in snowmelt. And, despite the fairly crisp link between snowmelt and river flow, the team isn’t quite sure what’s causing the seismic signals in the first place. The rumbles are suspected to be caused by sediment pinging off the riverbed during low discharges and water turbulence during high-volume flows, but they don’t know for sure.

The seismic station within the mountain’s tunnel is far from most human sources of seismic noise, which makes extracting the Aragón’s rhythm a little easier. Nearer traffic, construction and bustling crowds, this ability may be dampened, says Díaz. It might, however, find a home in similarly isolated parts of the world.

The Himalayas, then, may be a great site to advance this proof-of-concept in the years to come. Prone to highly damaging earthquakes, this area is already listened to by a family of seismometers. Its mountains are also home to a collection of glaciers whose waters provide for 1.65 billion people across the region. The glaciers there are increasingly succumbing to the warming world, so those seismometers may be able to listen to their demise as they track the speed of their hemorrhaging.

The surface and subsurface rivers taking the life away from the Greenland ice sheet, too, could perhaps be monitored in this way, says Mike MacFerrin, a glaciologist at the University of Colorado, Boulder, who was not involved with the work. Water gauges aren’t always easy to install where you need them, but seismometers, listening uninterrupted from a distance, may be able to fill in these missing data gaps.

It’s too early to know if the jam sessions of the Aragón river can be replicated on such grand scales, but it’s promising.

“It’s a new tool,” says MacFerrin. And, as the world heats up, “we need all the tools we can get.”