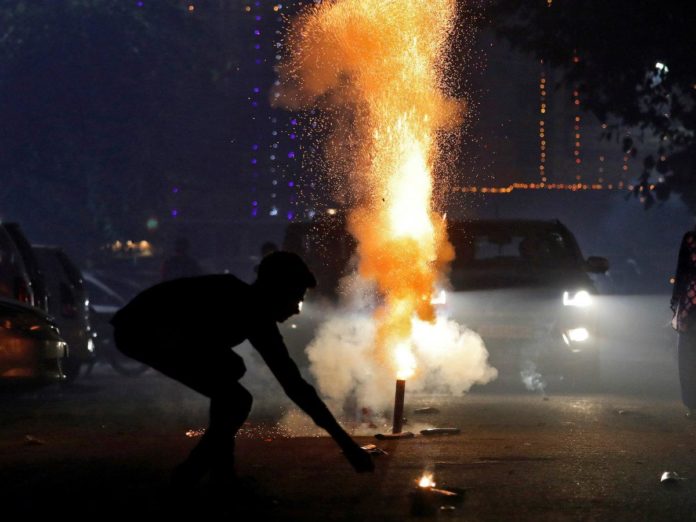 (IANS) Delhi Police have ensured “no risk” for all asthma patients this Diwali as they have not issued a single license to any ordinary or gunpowder firecracker seller. All the permissions have so far been given only for ”green firecrackers”.

Confirming the facts to IANS, Joint Commissioner of Delhi Police Licensing Unit Subhashish Chaudhary said: “In all 15 districts of Delhi, total 97 sellers had applied for a license to sell firecrackers. To the date (October 23) 57 shopkeepers were issued licenses with a condition to sell on eco-friendly green crackers. These licenses are temporary”.

“These apart, 14 firecracker sellers in Delhi already have a permanent license. Permanent licenses are issued for a period of five years while temporary licenses expire only in 10 to 15 days. But all the license holders, irrespective of the nature of permission, will have to sell only green fireworks in Delhi. They cannot sell gunpowder crackers,” Chaudhary said.

There is a stringent procedure to issue licenses for firecrackers. Shopkeepers send their requests to the Station House Officer of their areas. The Deputy Commissioner of Police office then gives its consent over the applications. Thereafter, the Fire Service Headquarters issues the No Objection Certificate to all who fulfill the criteria.

Delhi Fire Service Director Vipin Kental told IANS: “We received 97 new applications for temporary licenses. We have issued NOC to 79 applicants after founding them perfect for the criteria”.

The Director further said that we issue a license only after a physical visit to the spot. The shop area should be according to the norms i.e. nine square metres. Ways to the spot should be clear and wide to reach in an emergency and there should not be any doubt of catching fire.

All data suggests that if everything goes according to norms than pollution level in Delhi on Diwali will be as low as comfortable to any asthma patient.

Chaudhary said: “This is the first time when no one is allowed to sell gunpowder firecrackers. All will sell the green crackers that will help to reduce the probability of pollution”.

Asked about the idea of selling green fireworks, he said: “The green fireworks are the result of the research conducted by the Petroleum and Explosive Safety Organisation which falls under the Union Petroleum Ministry. Presently, 28 manufacturers are producing green crackers in the country”.