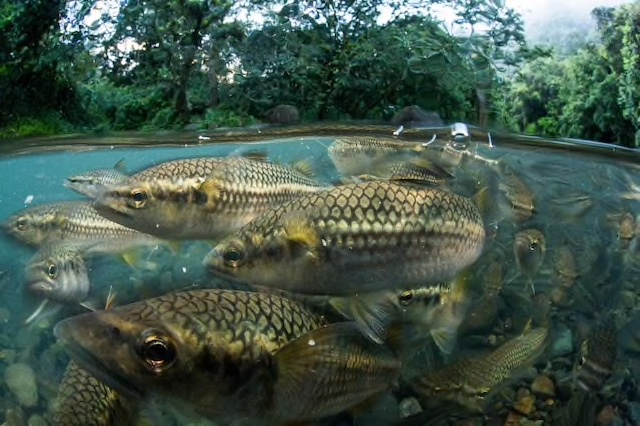 Freshwater makes up less than three percent of Earth’s water supply but is home to almost half of all fish species.

Although freshwater environments, from creeks to rivers, brim with more than 10,000 species of fish, we may never get the chance to see many of these mysterious creatures as their populations decline. Currently, more than 20 percent of known species are imperiled or already extinct. That’s why David Herasimtschuk doesn’t just photograph fish for fun; he’s a professional photographer dedicated to raising awareness and appreciation of freshwater environments and the wildlife that live in them.

Herasimtschuk is the photographer and cinematographer for Freshwaters Illustrated, an Oregon-based nonprofit that seeks to educate the public about freshwater ecosystems and inspire people to protect them. For almost a decade, he’s worked with Freshwaters Illustrated to document creek and river life across North America, from the mountains of Colorado to El Yunque National Forest in Puerto Rico. These environments not only are habitats for a range of aquatic plants and animals, but they support a whole web of terrestrial wildlife too, from the birds that nest in riparian areas or stop over on migrations to animals like beavers that use rivers for travel to predators who eat river-dwelling creatures.

Rivers are also primary sources of drinking water for humans. They control flooding; they provide irrigation for crops; they’re harnessed for hydropower. Despite the critical role they play for both humans and in nature, they’re often overlooked.

“People know more about a clown fish in the coral reef than a minnow that lives 10 minutes from their house,” Herasimtschuk says. “You’re essentially exposing people to a whole new world, but it’s a world that a lot of times is right in their own backyard.”

Several places that Herasimtschuk has photographed, such as southern Appalachia, harbor some of the most diverse freshwater ecosystems in the world. The region sustains roughly 300 to 400 native species of fish.

Southern Appalachia is also home to Herasimtschuk’s favorite amphibian: the hellbender, a giant aquatic salamander native to North America. Herasimtschuk says that if you patiently linger around these two-foot long salamanders, they’ll eventually interact with you and “accept you into their world.” That’s how he captured what may be the only photograph of a hellbender attempting to eat a snake, which earned Herasimtschuk a Wildlife Photographer of the Year award from the Natural History Museum in London. The scene was unexpected, as hellbenders tend to hunt for smaller prey. When the snake tightened around the salamander’s head, the hellbender tried to reposition its bite, giving the northern water snake the chance to escape.

Through his lens, Herasimtschuk has witnessed many rarely seen behaviors, like shiner minnows and Tennessee dace transform into a spectacle of color when they spawn. He’s seen a river chub spend days searching for suitable rocks to build a nursery. He’s swum among longnose gar, ancestral fish that he says resemble “underwater dinosaurs,” and watched a female gar lay 30,000 pea-sized eggs—some of which stuck to his camera. And it took him eight years and thousands of attempts to properly document rough-skinned newts congregating to mate in Oregon’s Willamette River.

Weather conditions can significantly impact how long it takes to capture the perfect moment. Many freshwater species spawn in elevated areas during spring and winter, so Herasimtschuk can easily spend eight to 10 hours in frigid water while he snaps hundreds of pictures.

He says he can handle the cold in his dry suit, but if it rains, the photo shoot comes to an end. In the world of freshwater photography, precipitation is both a friend and foe. For example, rain attracts salmon, as it helps them move upstream. But it also turns the water into a murky abyss. It’s not the rain itself that creates the haze but rather the pollution that drains into the water during a storm.

“When you see this water that looks like chocolate milk coming into a creek, you really get a sense of how that could smother creatures,” Herasimtschuk says. The EPA actually calls sediment the most common pollutant in rivers and lakes—about a third is from natural erosion, but the majority is from erosion that’s been accelerated by human activity, such as construction.

Despite the demanding nature of his work, Herasimtschuk persists, because one day, documenting these animals may no longer be possible. Dams make it difficult for certain species to travel along critical migration routes, and issues like sedimentation and pollution destroy their habitats. Herasimtschuk has even seen discarded car batteries decomposing in a river and federally protected areas littered with trash.

This isn’t just a problem for aquatic life; it’s a red flag for humans, too. Animals such as hellbenders are barometers of river health. Their presence in a river is a good sign that the water is clean and drinkable. But hellbenders are beginning to disappear, as are several other animals in Herasimtschuk’s photographs. Nevertheless, he hopes that his images will educate people and compel them to care.

“Many of these species have been around for millions of years, and it’s only in the last hundred that they’ve started to vanish,” Herasimtschuk says.