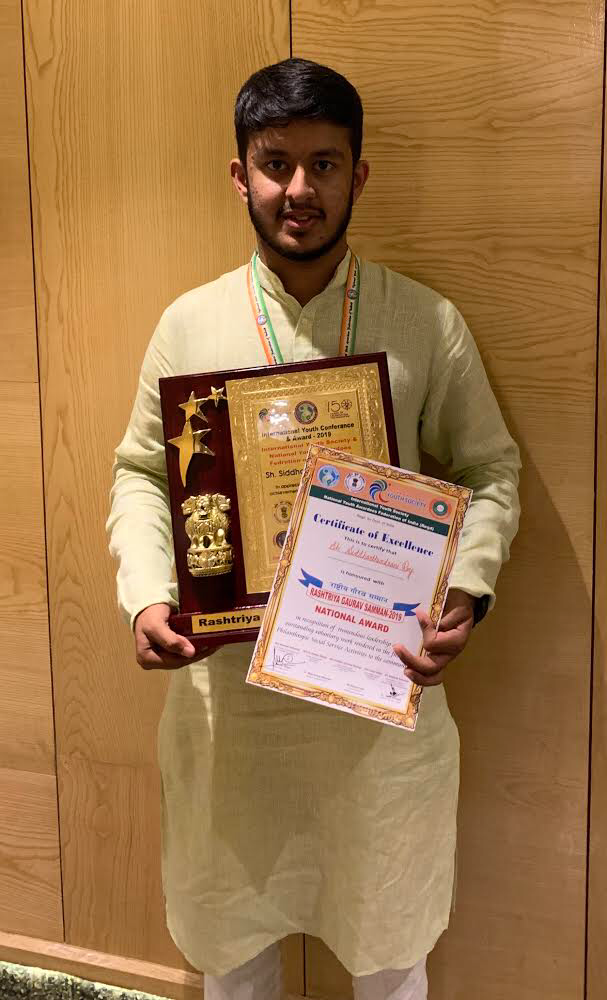 Siddharth Indrani Roy – 20 years old author & youth activist from Mumbai is pursuing his media and mass communication degree from Whistling Woods International (deemed under Tata Institute of Social Science) He was recently felicitated with Rashtriya Gaurav Samman by International Youth Society and National Youth Awardee Federation of India at Delhi. The Chief Guest for the event was Mr Kiren Rijiju (Minister of Youth Affairs and Sports) and the other guests included – Dr SN Subha Rao, Shri Manohar Jala, Aacharya Guru Karma Tanpai. While all the awardees had their father’s name on the trophy, Siddharth had mentioned his mother’s name, this gesture of his won everyone’s heart and made us think a bit more on this issue.

In the event, Siddharth opened his thank-you speech by saying, ‘Matru Devo Bhav, Pitru Devo Bhava’ and went on to speak about his parents’ contribution towards his success. In the end, he said ‘In our childhood, we use our dad’s name everywhere but now since now when I learn and experience things; I believe, why shouldn’t our mothers’ name be our middle name. I don’t disrespect my father but nor do I stand by patriarchy.

The delegates from Tibet, Nepal, Afghanistan, Bangladesh, Sri Lanka, Mauritius appreciated Siddharth’s thoughts and gave him a round of applause, The members from World Student Organisations also appreciated and appealed people to think on the same lines. Siddharth is not doing anything great but the small steps which he is taking are creating a big impact. The social stigma about gender equality is very rigid in our society, it is time to de-stigmatise these things and think from an open mind.

This Diwali we need to burn the social stigma and consider everyone equal. Siddharth is actively working with the youth community and these small stories sometimes leave a huge impact. The world doesn’t need a grand change-makers, the world needs many Siddharths who do their bit to help this society.