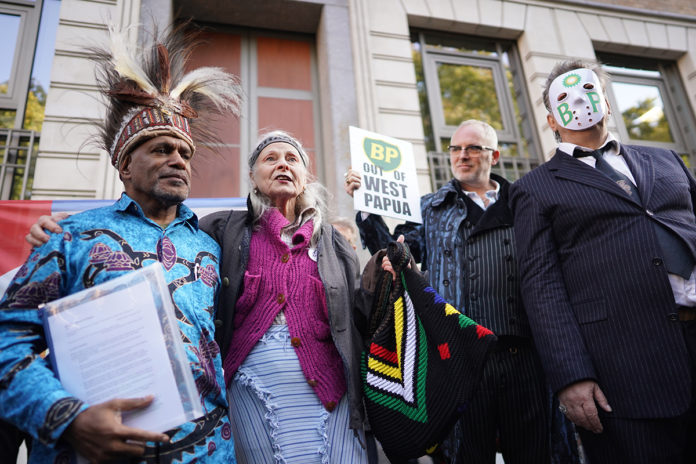 “BP are at the centre of crimes against the climate in the Papua rainforest, the world’s second largest tropical rainforest, after The Amazon, covering 30 million hectares” says Joe Corré. “This ecocide, lead by BP, is also leading to a slow-motion genocide”.

At the same time, West Papua has the highest rates of infant mortality, illiteracy and HIV in all Indonesian controlled territories (New Scientist 2017).

Over the last 50 years, 500,000 West Papuans have been senselessly murdered by the Indonesian military, essentially working for their paymasters, such as BP.

The controversial construction of the 2,700 mile Trans-Papua Highway, a spider’s web of roads to aid extraction industries – is a travesty for West Papua’s rainforest, recognised as one of the most biodiverse forests on earth. Thousands of species being destroyed so these polluting industries like BP can extract profits.

Indigenous West Papuans see the Trans-Papua Highway mega-project as devastating the region. BP is one of the largest foreign investors in the country and complicit along with other mining, logging and palm oil companies waiting to line their pockets.

‘A once remote area covered with rainforest and mangrove forest at Bintuni Bay, is in the process of being converted into an industrial landscape’ – West Papua Oil Palm Atlas (2015)

In 2019, BP also celebrates 20 years of fossil fuel exploitation in West Papua at their US$10Bn Tangguh LNG gas field at Bintuni Bay, where they are sitting on 14.4 trillion cubic feet of gas. Meanwhile, Grasberg, the world’s largest gold mine, has created a US$13 Bn pollution problem in the rivers, courtesy of owners British-Australian Rio Tinto, US company Freeport and the Indonesian Government.

According to Corré: “BP and their friends’ raping and pillaging of the environment in West Papua has been aided and abetted by a 50 year media blackout in West Papua by the Indonesian Government”.

“Behind the Indonesian regime’s veil of secrecy, away from the world media who are prohibited from entering West Papua, BP has been busy financing the Indonesian military and police to work as their private security and murder indigenous West Papuans who dare to get in the way of their ecocide”.

“BP must now tell the truth about the true impact their ecocide and genocide in West Papua”, says Corré.

Dame Vivienne Westwood says:  “For the last 20 years during the media blackout, BP has been paying the Indonesian police and military to carry out slow-motion killing of the population and forest of West Papua for short term profit in a scenario of dark destruction”.

Free West Papua Campaign founder Benny Wenda says: “BP is pillaging West Papua. For nearly 60 years, the people of West Papua have been crying out for justice and freedom from Indonesian colonial occupation. 500,000 men, women and children have been killed. We call BP ‘Bloody Papua’ because the company is getting rich off the blood of West Papuans.

When you work with a genocidal regime, you are complicit in the genocide. We are always told Indonesia is bringing “development” but who is that development for? It is not for us West Papuans. The only thing we get is the threat of extinction”.

1/. BP must tell the truth, providing full disclosure of their activities in West Papua including the environmental impact of their expansion plans at Bintuni Bay.

2/. BP must disclose all payments made to Indonesia’s police and military and disclose the exact amount of civilian deaths caused by their security services. BP must be prepared to make reparations.

3/. BP must totally end support for the Trans-Papua Highway, which is decimating the tropical rainforest principally to aid further mining operations across remote areas of West Papua.

4/. BP must provide full and fair access for international independent journalists, NGOs and observers to audit their activities rather than hide behind a veil of secrecy provided by the Indonesian government.

5/. BP must provide plans for a full exit strategy/decommissioning from West Papua to ensure this is handled with the lowest impact to both the environment and the wellbeing of indigenous West Papuans.