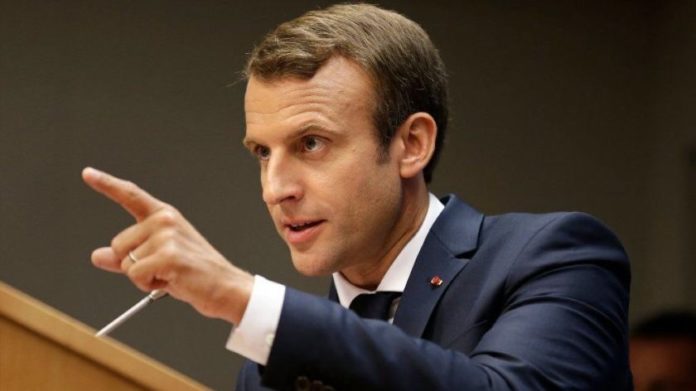 Paris — France has accused American internet giant Google of ignoring “the spirit and the letter” of a Europe-wide copyright law aimed at giving publishers a bigger cut of the economic benefit from online news.

French President Emmanuel Macron and the country’s lawmakers say they are now looking to sanction Google for adopting what they consider strongarm tactics to avoid paying to publish excerpts from European publications on Google News.

France is the first European country to put the European Union’s Directive on Copyright in the Digital Single Market on its statute books, taking effect at the end of October. The European Parliament adopted the directive in March, giving member states two years to pass legislation upholding its requirements.

France’s law requires Google to pay what has been called a “link tax” — effectively a license to display snippets of press articles on Google News.

Google responded to the law’s passage by announcing it would stop displaying previews of news articles and use only a headline and link. The company said French publishers could still ask for snippets to be published, but it would not pay for the right. Google says it sends 8 billion visitors a month to publishers’ sites in Europe alone.

“Publishers have always been able to decide whether their content is available to be found in Google Search or Google News,” Google wrote in a blog post. “The Internet has created more choice and diversity in news than ever before. With so many options, it can be hard for consumers to find the news they are interested in. And for all types of publishers … it’s important to make sure readers can find their content.”

Google’s announcement brought an angry riposte from Macron, who told journalists on Wednesday he would be asking Europe’s competition authorities to examine the move and to “engage in any possible action as soon as possible”.

“Certain companies like Google now want to get around the rules. We will not let them do this,” Macron said. His comments came after he and German Chancellor Angela Merkel issued a joint statement to the same effect following a meeting of French and German ministers on Wednesday.

The French competition authority announced at the end of September it would be looking into Google’s actions, but said it was only an “exploratory” inquiry at this stage. It could not say if or when legal action might be taken against the American internet giant.

France’s culture minister, Franck Riester, has described the EU directive as “absolutely essential for our democracy and the survival of an independent and free press.” He said Paris and Berlin were ratcheting up their response after he met Google executives Patrick Jabal, vice president in charge of partnerships, and Cécile Frot-Coutaz, director of YouTube for Europe and Africa, in New York last Saturday.

“It enabled me to restate France’s position and to understand that they still have difficulty sharing the benefits as the law outlines. That’s why we need to be even more determined,” Riester said afterward.

Riester had already declared Google’s move “unacceptable,” saying the object of the law was to “allow a fairer sharing of the profits the platforms make using press content.”

“Unilateral declarations of the rules is contrary to both the spirit and the letter of the directive,” Riester said, calling for a “proper global negotiation between Google and publishers.”

David Assouline, a French senator who helped draft the French law, tweeted that Google should “have more respect for France by applying the law instead of trying to get around it.”

“This giant must pay a miniscule part of its colossal income to finance the professional production of news,” Assouline wrote. “And France must not let itself be pushed around.”

Prior to its adoption in March, Google and other key internet players lobbied heavily against the EU directive. The most controversial articles in the final directive are article 15, which forces search engines and aggregated news platforms to pay for the snippets they use from other publications, and article 17, which makes internet giants including Google and YouTube responsible for material they publish without copyright permission and slaps penalties on them if they fail to block content that infringes copyright.

In 2014, Germany trialed a copyright law granting publishers licensing fees for quoted content. In response, Google stopped listing extracts of German articles. The country’s biggest publisher, Axel Springer, which had lobbied for the law, caved in after traffic to its publications fell by 80 percent. After two weeks, it decided to exempt Google from paying the tax.

Axel Springer Chief Executive Mathias Doepfner said at the time his company, publisher of Europe’s top-selling daily newspaper, Bild, would have “shot ourselves out of the market” if it continued to make Google pay licensing fees for access to its publications. He said the experience illustrated Google’s excessive market power; Google said it showed driving traffic to publishers provides them vital revenue.

In 2018, Richard Gingras, vice president of news for Google, told the Guardian the disaster for Spanish publishers was a warning. “We would not like to see that happen in Europe,” he added. “There’s no advertising in Google News. It is not a revenue-generating product to Google. We think it’s valuable as a service to society.”

In a letter to the president of the European parliament last year, Tim Berners-Lee, the inventor of the worldwide web, and 70 other web pioneersdescribed the EU’s directive on copyright as a “threat to the future of this global network.”

“As creators ourselves, we share the concern that there should be a fair distribution of revenues from the online use of copyright works, that benefits creators, publishers, and platforms alike. But Article 13 is not the right way to achieve this.” The signatories called the automatic content filtering requirement “an unprecedented step towards the transformation of the Internet from an open platform for sharing and innovation, into a tool for the automated surveillance and control of its users.”

Julia Reda, a German former European parliament member, now a research fellow at the Berkman Klein Center at Harvard University, led an unsuccessful multinational campaign to have the directive dropped. She says far from curbing companies such as Google, it will make them even more powerful.

“The way things are unfolding is entirely predictable because the directive is based on a fundamental mistake. It’s correct to identify that Google and Facebook have hit the traditional press business model, but they haven’t destroyed that model by using press articles but by hitting advertising and collecting vast amounts of data, which allows them to out-compete [publishers].”

Reda says major web companies such as Google and Facebook have earned the wrath of European administrations with their data collection and tax minimization practices.

“There are plenty of reasons to be angry with them, but publishing companies have to ask themselves whether they benefit from showing up on search results or not.”