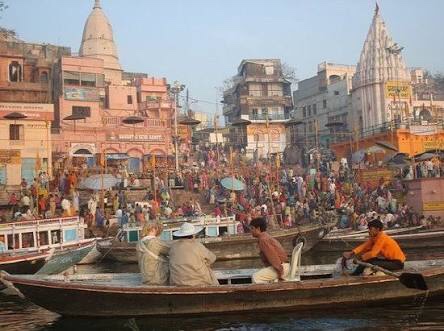 So you’ve visited the Golden Triangle of Delhi, Agra and Jaipur and survived the crowds? You’ve earned your India stripes and now you’re ready to take on the rest of the subcontinent. So where to begin? Our pick: Varanasi, aka Benaras, the nation’s most sacred city, and the perfect place to connect with India’s spiritual side.

Sprawling along the banks of the holy River Ganges, Varanasi is often described as India’s spiritual capital – a place so sacred that to die here is said to be a fast track to moksha, liberation from the endless cycle of rebirth and union with the divine. Despite the crowds of visitors who descend on the city, both foreign and domestic, there’s enough magic and intrigue here to delight even the most well-trodden traveller. Even if you don’t come away converted, you’ll leave with a sense of having, just for a moment, glimpsed India’s soul.

As the oldest city in India, and one of the oldest continuously inhabited cities on earth, Varanasi is frenetic and intense, colourful and chaotic. It’s also an immensely exhilarating and captivating place to visit once you get past the initial culture shock. In times past, the city was known as Kashi and later Benaras, before residents settled on Varanasi, a reference to the Varuna and Assi, two tributaries of the Ganges that come together in the heart of the holy city.

For Hindus, the focus of attention is the string of ‘ghats’, giant ceremonial steps leading down to the sacred river, where Hindu pilgrims come to cleanse their souls of sin through ritual bathing. From early morning till long after dark, the riverbanks are mobbed by devotees, mendicant sadhus (holy men), fortune-tellers, yoga practitioners, beggars, boat operators, trinket vendors, snack-sellers, silk-shop touts and of course visiting travellers. Yet despite the crowds, an air of devotion still pervades. Many Hindu pilgrims even make their final journey on the banks of the Ganges, passing to the next life in the funeral fires that burn ceaselessly along Manikarnika Ghat.

To appreciate the ghats in all their rainbow glory, come at dawn, and hire a boat to explore the riverbanks before the heat and crowds become too oppressive, then return late in the afternoon, when the warm evening light makes for richly saturated photographs, and devotees gather at Dashashwamedh Ghat for the atmospheric evening aarti (fire ceremony) prayers.

Varanasi’s old city stretches back from the west bank of the Ganges in a maze of pedestrian alleys, or galis. This tight tangle of lanes can feel claustrophobic and crowded, but this is by far the most atmospheric part of the city. Indeed, things have changed here only superficially since medieval times. The old city spills out onto the west bank of the Ganges, and the riverbank is lined with more than 80 ceremonial ghats, with central Dashashwamedh Ghat being the busiest and most famous. The east bank of the Ganges is a barren sandbank that floats in a misty haze created by the smoke from the endless cremation fires at Manikarnika.

For orientation purposes, the most useful navigation feature in the Old City is the junction known as Godaulia Crossing, a short walk from Dashashwamedh Ghat. The main railway station, Varanasi Junction, also known as Varanasi Cantonment, is a few kilometres north, and the main bus stand is opposite the station. Taxis and cycle and auto-rickshaws abound, but motor vehicles are banned from parts of the old city from 9am to 9pm. The airport is 24km north of the city, easily reached by autorickshaw or taxi.

What to do in Varanasi

You won’t be kicking your heels in Varanasi. From temple trips to yoga classes and prayer ceremonies on the riverbank, there’s always something interesting to fill your time. You’ll want to set aside at least a half day for sitting on the stone steps overlooking the Ganges, soaking up the remarkable atmosphere of faith and devotion. Here are some more top recommendations for exploring the sacred city.