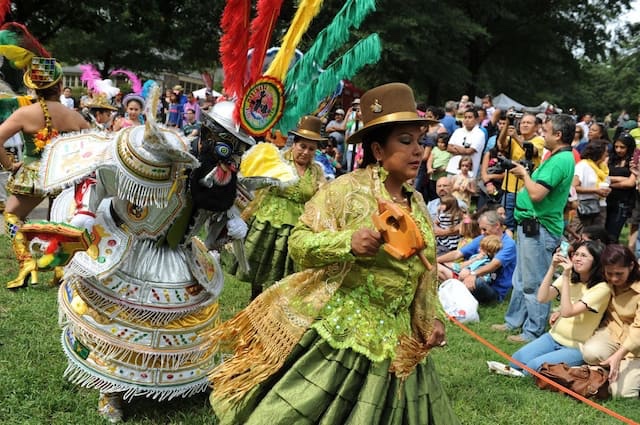 The U.S. has formally honored Hispanic heritage for more than 50 years, but people of Hispanic descent have influenced American history and culture for centuries.

From exploring the Western frontier on horseback to developing an early color transmission system for televisions, people of Hispanic descent have been helping to shape the history of the United States since centuries before the Declaration of Independence was ever signed. To celebrate the contributions of the nearly 60 million Hispanics who live in the country today, as well as the countless who came before them, the United States recognizes National Hispanic Heritage Month in the fall of each year.

U.S. House Representative George E. Brown first suggested that the country formally recognize Hispanic contributions in 1968. At the time, Brown represented East Los Angeles and much of the San Gabriel Valley, where his constituents were largely Hispanic.

Brown’s proposed law would authorize the sitting President to annually proclaim the week of September 15 and 16 National Hispanic Heritage Week. The two September dates were a nod to when many of the U.S.’s Hispanic neighbors gained independence from Spain: Mexico in 1810, and Guatemala, Honduras, El Salvador, Nicaragua, and Costa Rica in 1821.

After passage through Congress, the resolution was sent to President Lyndon B. Johnson for approval the same year. Earlier in Johnson’s career, he taught at a small Hispanic school near the Mexican border and was supportive of Hispanic rights. He signed the resolution into law and on the same day issued the first National Hispanic Heritage Week proclamation. Twenty years after the first National Hispanic Heritage Week, in 1988, President George Bush extended the week’s celebration to a month: September 15 through October 15.

It is with special pride that I call the attention of my fellow citizens to the great contribution to our national heritage made by our people of Hispanic descent—not only in the fields of culture, business, and science, but also through their valor in battle.

Explorers on the American frontier

In 1565, Spanish explorer Pedro Menéndez de Avilés established the first permanent European settlement in what would become the United States. The trade routes, forts, and cities the Spanish created as they expanded southwest still influence America’s geography, most visibly in the place names they left behind, such as Los Angeles (Spanish for “angels”), Montana (for “mountain”), and Florida (for “flowery”).

There are currently 42 Hispanic members in Congress, the largest class of Hispanic legislators in history. The first Congressional delegate of Mexican decent was José Manuel Gallegos in 1853. Although he could not read, speak, or write English, he introduced three pieces of legislation and pushed for language accessibility on Capitol Hill.

Today more than 136,000 Hispanic soldiers serve in the U.S. military and 60 have won the Medal of Honor, the country’s highest military award. After World War I, the most decorated soldier in Texas was Private Marcelino Serna, an immigrant from Mexico. During the war, he followed a German sniper into a trench and single-handedly captured or killed 50 enemy soldiers. For his actions he was awarded the Distinguished Service Cross, the second-highest award in the Army.

Hispanic workers are the fastest growing labor force in the United States. For farm workers, their improved working conditions are thanks in large part to Dolores Huerta, who co-founded the National Farm Workers Association. In the 1960s and 70s, she negotiated laws in California granting farm workers the right to organize and collectively bargain for better working conditions. Huerta was awarded the Presidential Medal of Freedom in 2012.

America can thank Hispanic inventors for the modern ballpoint pen, CAPTCHA, oral contraceptives, and color television. Scientist Ellen Ochoa holds three patents for optical-related inventions, but is most known for being the first Hispanic woman in space. She is now the director of NASA’s Johnson Space Flight Center, home of the astronaut program.

Although the U.S. has yet to have its first Hispanic president, for the last thirty years they have filled top positions in federal government. In 2009, Sonia Sotomayor became the first Hispanic citizen to serve on the highest court when she was nominated by President Barack Obama. She has written opinions from the bench on indigenous rights and affirmative action.