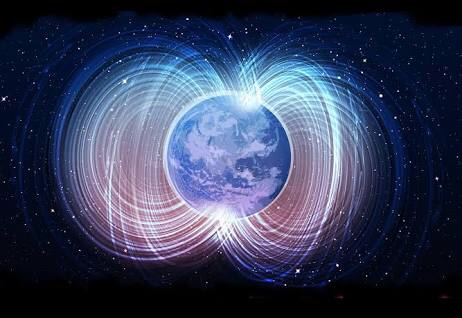 The planet’s magnetic poles swapped places at an astounding rate about 500 million years ago, which offers clues to core formation and hints at the effects on early life.

YVES GALLET BALANCED on a steep rocky slope in northeast Siberia, a turquoise river leisurely wending across the undulating landscape that sprawled below. But Gallet, of France’s Institut de Physique du Globe de Paris, had his face turned toward the rocks with one goal in mind: deciphering the history of Earth’s magnetic field.

This protective bubble shields Earth from radiation that’s constantly streaming from the sun. In the planet’s 4.6-billion-year history, the field has frequently flipped, swapping magnetic north and south, and some research suggests that another flip may be on the geological horizon. While fears of a looming geomagnetic apocalypse are overblown, a magnetic reversal could have many damaging impacts, from increased radiation exposure to technological disruptions, which makes understanding these historic flips more than just a scientific curiosity.

Now, Gallet and his colleagues have uncovered evidence of one of the highest rates of field reversals yet recorded. During this stunningly chaotic time, detailed in a recent publication in Earth and Planetary Science Letters, the planet experienced 26 magnetic pole reversals every million years—more than five times the rate seen in the last 10 million years.

The result joins a mounting set of evidence that suggests the planet’s magnetic field is capable of flipping more frequently than once thought possible, says Joseph Meert, a paleomagnetist at the University of Florida who was not part of the study team. Such research is slowly filling in Earth’s spotty magnetic record, which could help scientists better understand the timing and reason behind these geologic gymnastics—and may even hint at the effects ancient periods of hyperactivity had on early life.

Earth’s magnetic field is charged by the churn of the molten iron and nickel of our planet’s outer core, some 1,800 miles below the surface. Over the years, the field’s turns and tumbles have been captured by iron-rich minerals attuned to magnetic influences, which can become trapped in place as sedimentary rocks form or lava cools, like tiny compass needles frozen in time.

Based on this rocky record, our poles haven’t switched places in some 780,000 years, but they’ve been restless in the past, reversing every 200,000 years or so. There are also prolonged periods when the poles largely stayed put, such as a 40-million-year block of time during the Cretaceous period some 100 million years ago.

How fast can these reversals get? For answers, Gallet and his colleagues ventured by helicopter, inflatable raft, and foot to precarious cliffs that date to a sparsely sampled period in the Middle Cambrian, some 500 million years ago. The sands that built this region were laid down in what was once a warm, shallow sea, with magnetic minerals trapped in place as sediments drifted to the quiet ocean floor and compacted to form new rock layers.

Gallet and his colleagues first visited the site in the early 2000s, collecting around 119 samples from the nearly vertical face of rock. This work revealed a period during the Middle Cambrian that saw at least six to eight field reversals every million years.

“We did not expect such a high reversal frequency,” Gallet writes in an email, emphasizing that at that time, anything exceeding four or five reversals was considered high. The fast rate left him and his colleagues with a nagging suspicion that they needed to collect more samples. In the summer of 2016, they returned to do just that, cutting some 550 small blocks of rock every four to eight inches. Analysis of the magnetic signatures confirmed their suspicion: Over the three million years captured in their samples, they detected a striking 78 field reversals.

“We expected a very high magnetic reversal frequency, but of course not with such a high value,” Gallet says. And 22 of the samples record only one reversal, he notes, hinting that perhaps the true rate is even higher.

For now, the new study offers more questions than answers. It’s unclear why the field was so hyper at that time and, even more intriguingly, why it settled back down quickly.

One possibility is that these early flips are tied to the cooling and crystallization of the planet’s solid inner core. While many studies suggest this likely began 600 or 700 million years ago, perhaps the intense flipping in the Middle Cambrian came from a late period of inner core formation. But there’s still a lot of uncertainty.

“It’s very difficult to know anything about the core and its behavior,” says geologist Annique Van der Boon of the University of Liverpool, who wasn’t part of the study team. “We can’t see it, we can’t go there.”

The only other time period with comparably high reversals, known as the Ediacaran, occurred some 550 to 560 million years ago, a time that intriguingly lines up with a mass die-off of life, Meert notes. Studies suggest that the flip-flopping magnetic field of the Ediacaran was extremely weak, which might have exposed early life on Earth to punishing surface conditions.

“To use Star Trek parlance, our shields came down and allowed bombardment of cosmic and other radiation to the surface of the Earth,” Meert says. Perhaps this excess exposure killed off the soft and squishy Ediacaran critters, many of which couldn’t move to shelter from the sun.

But no mass extinction coincides with the newly proposed hyperactive flipping in the Middle Cambrian, when life was blooming in a myriad of forms. Maybe evolution gave those creatures a helping hand, he suggests, resulting in the burst of burrowers and other animals who could seek shelter from harmful solar rays. But at this point, he says, it’s all conjecture.

One curious pattern is that there seems to be some cyclicality to the changes, with prolonged periods without flips happening roughly every 150 million years. Between these delays, the field seems to flip at a rate as fast as five times every million years, and these periods are then punctuated with hyperactive spurts.

Based on these rough cycles, it seems Earth’s magnetic field might be headed toward another period of hyperactivity, Meert says, but he cautions that much remains uncertain. And even if a reversal is on the horizon, each one happens in slow motion from our perspective, with the poles shifting places over several thousand years.

“It’s not like a movie where you wake up one day and your magnet is pointing north and the next day it’s pointing south,” Meert says.