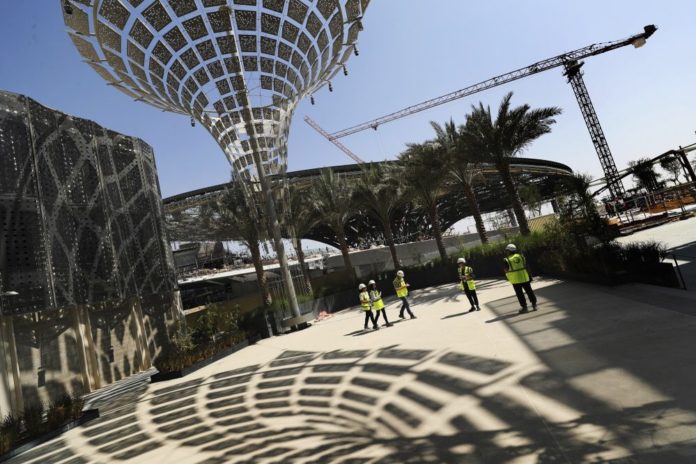 DUBAI, United Arab Emirates (AP) — It rises out of what were once rolling sand dunes stretching toward the horizon, a feverish construction site by tempo and temperature that has tens of thousands of workers building what looks like a new city in the desert of Dubai.

This is the site of Expo 2020, a world’s fair that will be hosted by a city-state that is already home to the world’s tallest building, the busiest airport for international travel, an indoor ski slope and other modern marvels.

Dubai is betting billions of dollars the expo will draw 25 million visitors, encourage business and spur further development of the city, a place that has been transformed by its ruling Al Maktoum family over the decades from a sleepy port of pearl divers and gold smugglers into a world showcase.

However, the preparations for Expo 2020 come as Dubai’s real estate market show signs of faltering amid global economic woes. Fears of military conflict across the Persian Gulf cloud organizers’ sunny projections. And the planning for the event, which begins Oct. 20, 2020, highlights the contradictions of Dubai and the wider United Arab Emirates, a nation governed by hereditary rulers, wildly enriched by its oil reserves and built by foreign laborers.

“We can only again invite, we can only be open, we can only facilitate, we can only give discounts to incentivize them to come,” said Tarek Oliveira Shayya, a board director for Expo 2020 and its chief spokesman. “The response, however, will come from them.”

World’s fairs conjure great wonders of engineering, like Paris’ Eiffel Tower for the 1889 fair. The light bulb and the Ferris wheel dazzled those at the 1893 fair in Chicago. The X-ray followed at Buffalo’s 1901 fair, and Seattle’s Space Needle opened to visitors at the 1962 fair.

But some of these extravaganzas can also turn sour. The 1984 world’s fair in New Orleans went bankrupt and required a government bailout. Expo 2000 in Germany drew 18 million visitors, well short of the 40 million expected. Milan’s 2015 expo saw rioting over corruption allegations.

While estimating Expo 2020 will account for as much as 2.5% of Dubai’s gross domestic product during its run, the government-backed bank Emirates NBD has warned that world’s fairs “have also resulted in higher than expected costs, increased debt for host cities, ‘white elephants’ and abandoned buildings.”

Dubai functions like a company town. Its marquee employers are the state-owned Emirates airline, state-backed real estate developers and other government-associated industries. And those industries helped build the Burj Khalifa, the world’s tallest building at 828 meters (2,717 feet), the largest manmade harbor at its Jebel Ali port, and the manmade, frond-shaped Palm Jumeirah archipelago in the Persian Gulf.

The city’s well-known appetite for megaprojects once inspired a 2016 article from the satirical website The Onion about Dubai building “the world’s first full-scale replica of Dubai, a multibillion-dollar investment known as the Dubai Experience built on the outskirts of the city-state.”

At the center of the Expo 2020 site is the Al Wasl Dome, a 65-meter-high (213-foot) structure that will see videos and designs projected across it. Its Sustainability Pavilion, which recalls the towers of New York’s 1964 world’s fair, will be covered in solar panels and surrounded by similarly paneled “energy trees” to make it a zero-energy structure. Construction crews will also build a network of roads and a connection to Dubai’s driverless Metro line.

All told, construction costs around the event are estimated at $7 billion.

But Dubai will need to incorporate the new city into its sprawling real estate market after the six-month expo ends on April 10, 2021. And already, that market shows signs of trouble.

Real estate speculation and the Great Recession helped drag down Dubai’s economy in 2009. A sharp drop in oil prices in 2014 also hurt its economy, as has tension between the U.S. and Iran and the war in Yemen.

Dubai’s real estate market, which has been a major economic driver since it allowed foreigners to own property beginning in 2002, has seen its value drop by a third since its 2014 peak. Apartments, villas and office space stand empty, and more properties are due to come onto the market in the coming years, sparking enough alarm for Dubai’s government to set up a commission to come up with ways of heading off the problem.

Expo officials point out that the German industrial conglomerate Siemens plans to open an office at the site after the expo closes. They believe other businesses, drawn by the expo, will follow suit.

However, uncompleted “white elephant” projects lurk around Dubai, like the Palm Jebel Ali, the unfinished twin of the Palm Jumeirah. A massive amusement park that recently opened near the Expo 2020 site reported a loss of $57 million last year and canceled an expansion. And the Al Maktoum International Airport, envisioned to one day take over for Dubai International Airport, has seen repeated delays to its expansion.

Success for the event may also hinge on events beyond Dubai’s control. Flights out of the country already swing wide around the Strait of Hormuz, the mouth of the Persian Gulf, because of U.S.-Iranian tensions. Yemen’s Houthi rebels, whom the UAE has been battling in a Saudi-led coalition for years, have repeatedly threatened to target the country.

Expo 2020 officials say their event will be “apolitical.” Iran will take part, officials say. Qatar, the energy-rich nation that the UAE and three other Arab countries have been boycotting over a political dispute since 2017, has been invited, and discussions are under way, said David Bishop, an Expo 2020 spokesman. Also taking part is Israel, which Gulf Arab countries don’t recognize.

Construction continues unabated. Parts of the UAE’s pavilion, which will look like a falcon in flight, and Saudi Arabia’s exhibition, which will resemble a window looking up to the sky, are up. Others have begun construction under the relentless heat and humidity of Dubai, where it can go over 45 degrees Celsius (113 degrees Fahrenheit) in the summer.

Two workers have been killed on the site, and there have been 43 other “serious incidents” resulting in injuries, said Rob Cooling, vice president of safety and environment at Expo 2020. That’s over the course of some 140 million man-hours of labor expended so far, he said, as authorities offer training and cooling areas for workers.

“When these incidents happen they are absolutely tragic, but they are subject to a very, very detailed, thorough independent investigation,” Cooling said. “Just to emphasize: At no stage are we complacent. We’re also always looking to maintain and, in fact, drive continued improvement.”