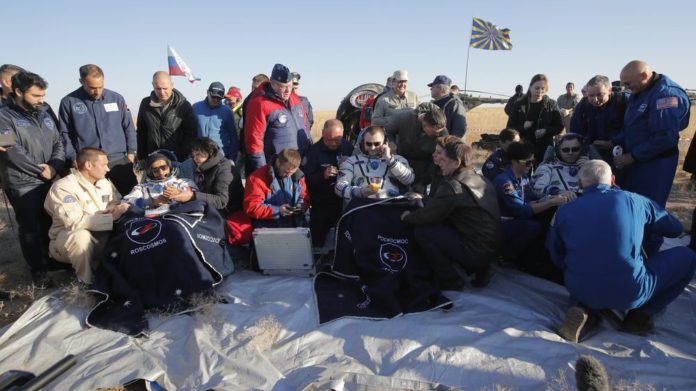 ZHEZKAZGAN, Kazakhstan (AP) — An American, a Russian and the first person from the United Arab Emirates to fly into space landed safely on Thursday after a six-hour flight from the International Space Station.

The capsule carrying Nick Hague, Alexey Ovchinin and Hazzaa al-Mansoori touched down on the steppe in Kazakhstan in Central Asia at 3:59 p.m. local time (1059 GMT), the impact sending a cloud of dust into the sky.

Al-Mansoori, the first of two men chosen by the United Arab Emirates to fly to the space station, returned after an eight-day mission while space veteran Ovchinin and Hague, who was on his maiden flight, are back after spending six months at the station.

The three men were extracted from the capsule and put on fold-out chairs so that they could rest and undergo preliminary medical checks. Al-Mansoori’s team wrapped the smiling astronaut in his country’s flag before taking him away for more health checks.

The former military pilot, the first Arab to have traveled to the International Space Station, will return home to a hero’s welcome as his flight last month was widely celebrated across the country, and Dubai’s tallest skyscraper was lit up to mark the launch.

The UAE has a fledgling space program with big ambitions. It launched its first locally made satellite, KhalifaSat, in October from Japan, and it also wants to launch a probe to Mars in 2020.

Three NASA astronauts, a European Space Agency crewmember and two Russians remain aboard the orbiting lab to continue their work on hundreds of scientific experiments.