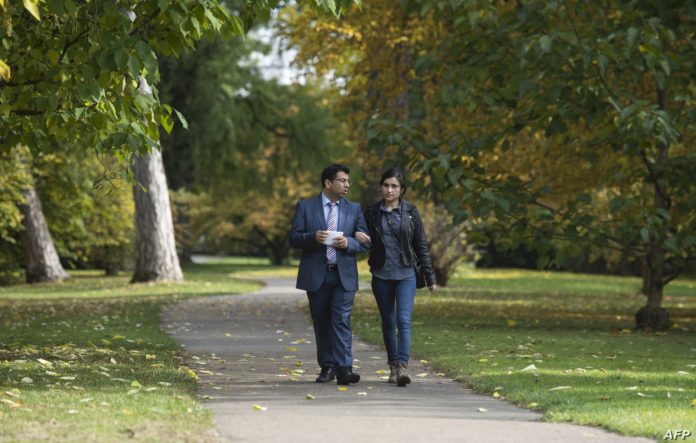 TBILISI – Yazidi families would not feel safe returning to their homes in Iraq until Islamic State militants accused of atrocities against the religious minority face justice, according to a doctor awarded Saturday for his work with Yazidi women and children.

“Yazidis need to trust the authorities in Iraq in order to establish peace and make a process of reconciliation and transitional justice. This has not happened,” Dinnayi said.

Islamic State rampaged through the Yazidi religious community’s heartland in Sinjar, northern Iraq, in 2014, slaughtering thousands of people, in what the United Nations has called a genocide.

About 7,000 women and children were kidnapped to become sex slaves or fighters. Almost 3,000 of them remain unaccounted for, according to community leaders.

The jihadist group was driven out of the region in 2017, but many Yazidi still live in camps, afraid to return.

Some militants have faced trial in Iraq but on charges of belonging to a terrorist group rather than for alleged war crimes and genocide — something that has fueled a sense of distrust in authorities among the Yazidi community, Dinnayi said.

“The recognition of genocide is the first step in order to satisfy the victims,” he told the Thomson Reuters Foundation in a phone interview from Armenia where the award ceremony was held.

The problem was exacerbated by Iraqi laws allowing rapists to avoid prosecution by marrying their victims and the lack of a specific crime for sexual slavery, Dinnayi said.

Fears of IS escape

The 46-year-old added he was also concerned that a recent Turkish offensive against Kurdish forces in neighboring Syria could further hamper efforts to see justice done, by providing militants jailed there with a “big opportunity” to escape.

Kurdish officials have said almost 800 Islamic State-affiliated foreigners, many of them women and children, escaped from a camp after the Turkish incursion began last week.

There are also fears that jihadists held in jails in Kurdish-controlled areas of northern Syria could flee.

Dinnayi, who lives in Germany, was awarded the $1 million prize for his work helping more than 1,000 Yazidi women and children seek medical treatment in Europe.

The prize money would go to his organization, Air Bridge Iraq, and two other aid groups helping people who suffered at the hands of Islamic State militants, he said.

The Aurora prize runner-ups were Zannah Mustapha, a lawyer who set up a school for children affected by violence in northeastern Nigeria, and Yemeni lawyer Huda Al-Sarari, who investigated human rights abuses in the war-torn country.

The annual Aurora Prize for Awakening Humanity was founded by Armenia-based 100 LIVES, a global initiative that commemorates a 1915 massacre in which up to 1.5 million Christian Armenians were killed by Ottoman Muslims. (Agencies)