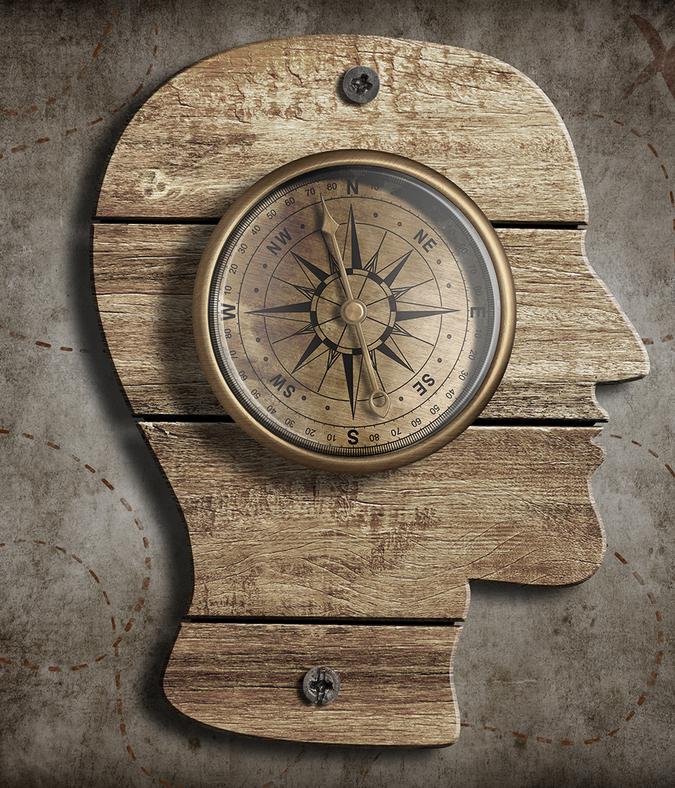 Birds, whales, butterflies, and many other animals have an instinctive sense of which way points North. Even dogs tend to poop in line with the planet’s magnetic poles. If they can sense magnetic fields, can we? Is it possible that you could, say, find your car in the parking lot through magnetic sense alone? It turns out that asking the question opens a big can of worms. But the short answer? Probably.

For most of the 20th century, scientists who wanted to research the ability to sense magnetic fields — magnetoreception, as it’s called — were ridiculed. That was true even for research into animals now considered obvious, like homing pigeons. Since then, scientists have found that virtually every migratory animal, from birds to fish, have a built-in compass. Magnetoreception is even present in animals you might not expect, like lobsters, worms, frogs, and snails.

But what about humans? In the 1980s, British biologist Robin Baker performed a series of experiments that seemed to show that humans had an innate sense of direction. In one study, he blindfolded students, put them on a bus, drove them around the countryside, then asked them to point toward their point of departure. The catch was that they all had a piece of metal in their blindfolds: for some, it was a bar magnet, for others, it was a nonmagnetic brass bar. Those with the brass bar were almost always able to point toward home; the students wearing the bar magnet couldn’t.

But when other scientists tried to replicate Baker’s experiments, they didn’t get the same results. And after Baker published a paper in 1983 claiming that human sinus bones are magnetic, Caltech geophysicist Joe Kirschvink showed that they weren’t — instead, Baker’s results were due to contamination.

But later, Kirschvink himself performed experiments into human magnetoreception. To overcome drawbacks in previous research, he did things a little differently: he measured subjects’ brainwaves on an EEG instead of watching their behavior, which is open to interpretation; and he tested them inside of a Faraday cage, a metal box that keeps out electromagnetic interference, which helps ensure results aren’t due to radio waves or other noise. Then, he applied a magnetic field designed to mimic that of the Earth. What happened? When the magnetic field was rotated counter-clockwise, there was a drop in alpha waves — a sign that the brain was processing something. That showed that neurons were activating in response to the magnetic field. Kirschvink concluded that yes, humans do have the power of Magnetoreception.

So what could be behind this? Scientists have two leading theories. Magnetite, the magnetic iron mineral Baker claimed to find in the human sinus bone, is still in the running. It’s extremely sensitive to magnetic fields, and could be strong enough to tell animals not only which way is north, but even where they are latitudinally. Birds have it in their beaks and fish have it in their noses, and it’s even been found in the human brain. Others, however, think magnetite might just be a part of the immune system, with no role in navigation at all.

The other leading theory is an intriguingly named protein called cryptochrome. Certain wavelengths of light turn it into what’s known as a “radical pair” molecule, with two unpaired electrons that spin in the same direction or in opposite directions. Pass a magnetic field over them, and the electrons flip between having aligned and nonaligned spins, which also changes the chemical behavior of the molecule. Scientists have amassed some convincing evidence of this process at work in birds.

But in the end, the answer is still out there. We don’t know how powerful human Magnetoreception is, or whether it’s just a vestige of our evolutionary past. We also don’t know what could trigger it. But one thing is certain: finding your car in a parking lot will always be tough.