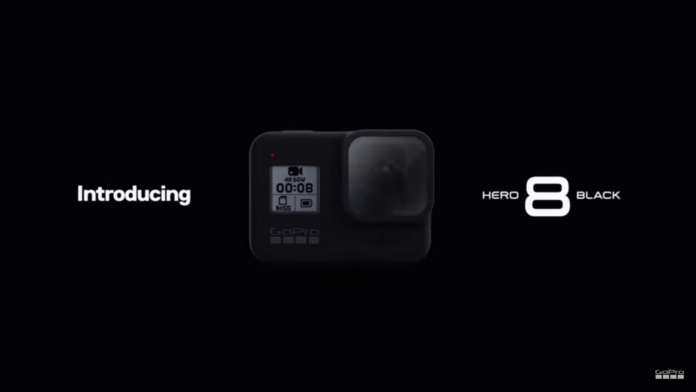 GoPro has just launched its latest flagship Hero 8 Black action camera. It brings a number of design and stability improvements. GoPro is also targeting vloggers with the new action cam. It will be competing wnot only with GoPro’s older Hero 7 Black but also with the DJI Osmo Action, which was launched in May this year. Let’s check out how the GoPro Hero 8 Black stacks up against DJI Osmo Action.

The Osmo Action has a display on the front as well as back, which proves immensely helpful when framing shots or vlogging. The Hero 8 Black has only a rear display. The tiny screen on the front of the new Hero shows the current mode, the duration of the current clip, and the battery life. It doesn’t display a preview of the scene.

The Osmo Action requires a frame if you want to place the camera on the mount. But the Hero 8 Black has a new design that allows you to mount it on any GoPro mount without having to attach a frame. It has built-in mounting ‘fingers’ at the bottom that slot into all GoPro mounts.

Both action cameras are water-resistant. The GoPro Hero 8 Black offers water-resistance up to a depth of 10 meters. DJI claims its camera is water-resistant up to 11 meters. Among other things, users can’t remove the lens cover on the Hero 8 Black. GoPro claims it has also made the glass twice as strong as the Hero 7 Black glass. If you like to use filters, you have to use an additional adapter.

Though the Hero 8 Black lacks a front display, it more than makes up for it with the newly announced Mods. The company announced a handful of new accessories that will turn your Hero 8 Black into a more professional vlogging camera. However, the Mods won’t be available until late 2020.

There will be a Display Mod that would offer a selfie screen; a Media Mod that would add an external microphone, a 3.5mm audio hack, a USB-C port, and an HDMI port; and a Light Mod that could be attached to the mount or the Media Mod to offer LED light. All three Mods can be used simultaneously.

The DJI Osmo Action can take AEB pictures, but it doesn’t support HDR for still photos. The Hero 8 Black has a couple of new tricks to let you shoot still photos in extreme situations. They are the Live Burst mode and an improved Super Photo 2.0. The Super Photo 2.0 is a minor upgrade over GoPro’s HDR image processing.

The Live Burst mode captures 1.5 seconds of images before you press the shutter and 1.5 seconds after. It’s particularly useful when capturing unpredictable scenes. You can select the best still to save as a photo or save the whole 3-second clip.

The GoPro camera has a bunch of view modes: Wide, SuperView, Linear, and Narrow. The DJI camera offers only a single wide field of view. The Osmo Action has a De-Warp feature that crops into the view and removes the fish-eye distortion of the wide-angle lens.

Both cameras have a time-lapse video mode, which compresses time by capturing frames at a much slower pace. The Hero 8 Black can slow down to one frame per 60 minutes, which means you need more than a day to shoot one second of video. The Osmo Action can be slowed down to one frame every 30 seconds.

For stabilization, the DJI Osmo Action has the Chinese company’s RockSteady technology, which is pretty impressive. The Hero 8 Black features HyperSmooth 2.0 for superior stabilization in all shooting modes and resolutions. It works even when you are recording 1080p videos at 240fps. It also has a TimeWarp 2.0 technology, which adjusts the time-lapse speed depending on the camera movement.

The Hero 8 Black also has a new HyperSmooth Boost mode. It offers smoother, gimbal-like stabilization by cropping the frame slightly. It’s useful when you are shooting close-up vlogs or challenging actions.

The DJI Osmo Action has been around for a few months. It’s officially priced at $379. But the camera is often available on sale for as low as $329. The Hero 8 Black has been priced at $399.

The Hero 8 Black is more expensive than the Osmo Action. They both have the same bitrate. If you are a vlogger or a price-conscious buyer, the DJI Osmo Action makes more sense because of its front and back display, and relatively lower price. Its low-light performance is also praiseworthy.

The Hero 8 Black would be a great camera for vloggers once the Mods hit the store shelves. But the Mods are about a year away.