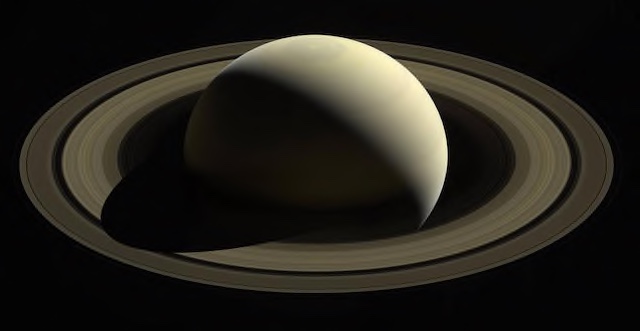 With its newfound companions, Saturn nudges out Jupiter as the planet with the most known moons in our cosmic neighborhood.

Jupiter may be the solar system’s king, but Saturn has a bigger entourage: Today, astronomers announced that they have discovered 20 more moons around Saturn, bringing its total number to 82—the most for any planet in the solar system. The massive haul comes just over a year after astronomers announced 12 new moons orbiting Jupiter, but with the latest finds, Saturn’s retinue now surpasses Jupiter’s 79 known natural satellites.

Taken together, these sets of relatively small moons could help astronomers better understand the many collisions that took place in the early solar system, and they could provide ripe new flyby targets for future missions to the gas giants.

“One of the more exciting things about these outer moons is that there’s always missions going,” says Scott Sheppard, an astronomer with the Carnegie Institution for Science who co-discovered both planets’ newest moons. Even now, three missions to Jupiter and Saturn are in the works: NASA’s Europa Clipper; NASA’s Dragonfly mission; and the European Space Agency’s JUICE mission.

“There’s so many of these moons now, there’s almost guaranteed to be one of these moons somewhere near where the spacecraft enters the Jupiter or Saturn environment,” Sheppard says.

Saturn’s newfound moons are all about three miles wide. They are so faint, they lie just about at the detection limit for the Subaru telescope, a facility atop Hawaii’s Mauna Kea volcano used in their detection.

That’s why this discovery was more than a decade in the making. From 2004 to 2007, Sheppard and his colleagues used Subaru to take an extremely close look in the area around Saturn to search for undiscovered moons. While they did see some intriguing points of light, they struggled to prove that those pinpricks were in fact orbiting Saturn.

“I’ve always had that in the back of my mind,” Sheppard says. But now, new computer techniques have made it much easier to analyze multiple years’ worth of telescope images and find links between them. When Sheppard reran the data, the images confirmed that 20 dots of light traced out orbits around Saturn.

Seventeen of the new moons orbit in the opposite direction of Saturn’s rotation. Each of these “retrograde” moons takes more than three years to trace out one orbit. The other three moons orbit Saturn in the same direction as the planet’s rotation. Two of these “prograde” moons take roughly two years to finish one orbit, while the third takes more than three years to go around Saturn.

These newfound moons slot into previously known groups of Saturnian satellites—each named after sets of mythological giants. Based on their orbital directions, distances from Saturn, and their orbits’ inclinations relative to Saturn’s, the retrograde moons fall into the Norse group. The two closer prograde moons fall within the Inuit group, while the most distant one might fall within the Gallic group.

Sheppard and his colleagues think that each of these moon clusters formed from a distinct parent body that Saturn captured during the solar system’s early days. Then, in a celestial game of bumper cars, collisions broke up the parent bodies over time, yielding the fragmented moons we now see.

None of the 20 new moons yet have official names. Sheppard and his colleagues have invited the public to give suggestions in a contest set to end on December 6.

Next-generation telescopes, such as the Giant Magellan Telescope being built in Chile, will likely find even more moons encircling the solar system’s gas giants. Sheppard says that currently, our best telescopes can’t detect moons around Jupiter that are less than a mile across or Saturnian moons less than three miles across. Even bigger objects may lurk around Uranus and Neptune.

If there are more small, distant objects to find, Sheppard is more than ready for the challenge. With astronomer Chad Trujillo, Sheppard previously co-discovered an extremely distant object with an orbit that might be tugged by an unseen “Planet Nine” deep in the solar system’s outskirts. In 2018, he co-found the most distant object ever seen in our solar system, a frozen blob named Farout that’s more than a hundred times as far as Earth is from the sun. And just months later, he and his colleagues beat their own record by finding an even more distant object named Farfarout.

Sheppard’s moon discoveries strike a more personal note. When he was about 12 years old, he received a kid’s science magazine that listed all the known planets and moons, and he posted the pages on his bedroom wall.

“Being able to fill out that diagram further and further is basically a dream come true,” he says.