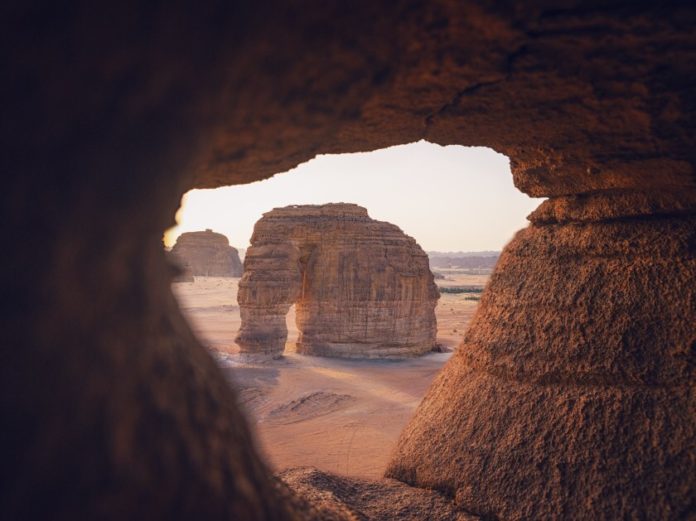 The government of Saudi Arabia, suffering from a battered image and seeking to open itself to tourism and expand cultural ties with Western countries, has found a willing partner in the Coachella Valley-based contemporary art biennial Desert X, which announced Monday that it would collaborate on an exhibition in the kingdom in early 2020.

Desert X consisted of large-scale site-specific works staged across the Coachella Valley in 2017 and again in 2019. The new exhibition, Desert X AlUla, will be held in northwestern Saudi Arabia and funded by the government’s Royal Commission for AlUla.

Although the Saudi exhibition signals growing international interest in Desert X, three of 14 members on the organization’s board of directors resigned over the decision to work with a government responsible for human rights abuses and the killing of journalist Jamal Khashoggi. The three are artist Ed Ruscha, art historian and curator Yael Lipschutz and philanthropist and former fashion stylist Tristan Milanovich.

Desert X founder and board President Susan Davis defended the collaboration as an opportunity to generate “a new dialogue, one that reaches across boundaries and borders.”

“Our mission has always been to create a platform for conversations around art and to welcome a multiplicity of voices,” Davis said. “Ultimately, it’s a way to have direct communication — artists to artists, artists to individuals, artists to the bigger audiences. Ultimately, we see our involvement as a way to engage with individuals, not to isolate them.”

But Lipschutz, who like Ruscha was a founding member of the board, called the Saudi project “completely unethical.”

“To pretend it’s about some sort of dialogue when you’re receiving money from the Saudi royal family — this isn’t about dialogue among artists, it’s about striking a deal with a national government that has committed a horrific genocide in Yemen, that is completely undemocratic and that has an appalling record of discrimination against the LGBTQ community,” Lipschutz said.

A year ago Khashoggi, a Saudi dissident and Washington Post columnist, was killed inside the Saudi Embassy in Istanbul. The CIA concluded that the country’s de facto ruler, Crown Prince Mohammed bin Salman, ordered the assassination — a finding the prince denies, though he did accept “full responsibility” for the killing in a recent “60 Minutes” interview.

Davis said that Desert X organizers — other founding board members include collector Beth Rudin DeWoody and former Palm Springs Art Museum Director Steven A. Nash — spent months soliciting artists’ opinions and reaching out to other arts organizations and individuals who had worked in the Middle East. The board had “long conversations,” she said, and a “large majority” voted to pursue the project.

Desert X AlUla, which is scheduled to run Jan. 31 to March 7, is co-curated by Desert X artistic director Neville Wakefield and two Saudi women, Raneem Farsi and Aya Alireza. Artists will create large-scale outdoor works responding to the locale: in a canyon, surrounded by towering sandstone rock formations,across about one mile of the AlUla desert.The exhibition will coincide with AlUla’s annual Winter at Tantora music festival, which started in 2018.

AlUla is a historic area that the Royal Commission envisions as an “open museum” focused on heritage, nature and the arts. Archaeological and historical sites are being conserved, representatives have said. The area is home to the country’s first UNESCO World Heritage Site, the ancient city of Hegra.

Desert X AlUla is part of the crown prince’s economic, cultural and social reform plan, called Vision 2030, which includes opening the region to tourism. Last week, Saudi Arabia announced a new visa program that will allow tourists from 49 countries, who aren’t traveling for religious purposes, to enter the country and stay up to three months.

Whether those ideas and issues will include political expression remains an open question. Previous Desert X artists have touched not only on environmental issues but also immigration, gun violence, poverty and other political, economic and social issues. Desert X organizers, however, said they are not expecting censorship of artists’ work.

Representatives from the Royal Commission have attended Desert X, Davis said, “so they saw our show and the way our visitors engage with the art, and they’ve been interested from the get-go in what we were doing and how they might do something similar there. There’s never been anything that indicated that there’d be censorship.”

Added Wakefield: “So far, we’ve been presenting the proposals and there haven’t been any rules applied.”

Desert X AlUla will feature about 15artists, half from the Middle East and half from the U.S. and Europe. The lineup has not been finalized, but a number of artists have visited AlUla to discuss participation. Among them were L.A. artists Lita Albuquerque and Sherin Guirguis, along with the Danish collective Superflex — all of whom participated in previous Desert X shows. So were the Saudi artists Manal AlDowayan, Zahra AlGhamdi, Nasser AlSalem, Rashed AlShashai and Muhannad Shono. Mohammed Ahmed Ibrahim, who is from the United Arab Emirates, and French Tunisian artist eLSeed also visited AlUla.

“My work is political and very much about freedom of speech and telling the stories — the voices — of people who have been suppressed and oppressed, whose work has disappeared,” said the Egyptian-born Guirguis. “So I went back and forth [about participating]. But in the end, for me, I was most interested in having a conversation. I’m not interested in promoting tourism or supporting government agendas. I’m interested in engaging with other artists and the people of AlUla, of Saudi Arabia, and exploring what it means to make art under these kinds of conditions.”

Guirguis said her installation won’t shy away from addressing the topics she’s most passionate about.

“The opportunity to get in there and talk about issues and make work that has an overtly feminist agenda — I’m gonna take that shot,” she said.

Wakefield said he envisions a dialogue not only between international artists but also between the contemporary art and the ancient site. The art, he said, will span sculpture, video and installations, among other genres, as in past Desert X shows.

Thematically, visitors can expect an exhibition heavily focused on environmental issues as well as the culture, ecology, physical beauty and history of the region, organizers said.

“Also, issues of connectedness, in different ways, is a theme that runs through it,” Wakefield said. “How we connect different parts of the world, culturally, and through these shared environments, in this case deserts.”

Multimedia artist AlDowayan, who was born and raised in Saudi Arabia and now lives and works between Dubai and London, addresses visibility, invisibility and representations of Saudi women and minorities in her work. But for Desert X AlUla, she’s focusing on puddles: Her “Now You See Me, Now You Don’t” is described as a playful interactive installation involving glowing trampolines, illuminated from below, that visitors can jump on.

“I’m trying to re-create a puddle and bring attention to the idea of water scarcity,” AlDowayan said.

AlDowayan isn’t concerned about censorship. “The struggle of self-censorship is real with every artist, everywhere,” she said. “But nowhere in the [invitation] did it say you couldn’t do this or that — there were no restrictions. They were basically saying, ‘Dream big and bring us your ideas.’”

Albuquerque, who has shown art installations in five deserts around the world, says she has “no concerns” about being a female artist making work — about a powerful woman — in Saudi Arabia. “It’s not that I’m not aware,” she said of her involvement in a Saudi government-funded project. “But I think art transcends a lot of political issues. It’s about wanting to utilize art to make a statement and to help communicate.”

For Desert X AlUla, Albuquerque is creating a sculptural installation that will stretch across a mile or so. The land art continues her narrative about a 25th century female astronaut who travels to Earth to teach people about the stars. “It’s about interstellar consciousness,” she said.

Co-curator Farsi said including educational programming in the exhibition, particularly for Saudi students, will be key.

“This is the first opportunity of its kind in the kingdom,” Farsi said. “It wasn’t part of our upbringing here to be exposed to all this art and culture. Now, with the opening, it’s such a great opportunity. [The exhibition] is so rich in its content. We want to elevate the art appreciation.”

None of the artists Wakefield reached out to for possible inclusion in the exhibition, he said, declined to participate for political or moral reasons.

“The reason everyone wants to do this, the artists and myself, is to open up dialogue,” he said. “The common voice among all the artists I’ve been working with has been, ‘If you don’t give people the opportunity to change their hearts and minds and become engaged with outside cultures, then you’re part of the problem, not part of the solution.’”

Desert X AlUla is a bold and important move from a young organization, Davis said. “We’ve been bold from the start.”