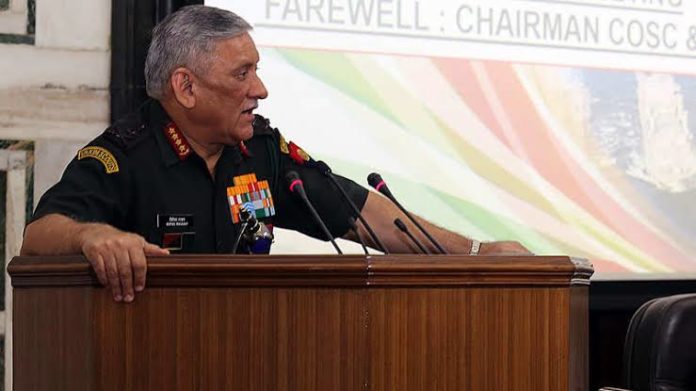 (IANS) Army Chief General Bipin Rawat said on Friday that domestic defence industry exports are expected to grow to Rs 35,000 crore by 2024, up from the current annual figure of Rs 11,000 crore.

General Rawat, who was speaking at a conclave of foreign defence attaches at the Constitution Club, further said that India is committed to the ethos of indigenisation of defence production. The conclave was also attended by Navy Chief Admiral Karambir Singh.

“Let me assure you that we are manufacturing weapons and equipment not only to arm our defence forces but we are now gradually becoming an export-oriented defence industry. Our defence exports which range in the figure of Rs 11,000 crore annually, are set to achieve the figure of Rs 35,000 crore approximately by the year 2024,” said Rawat.

“As we prepare to meet the challenges that lie in our security path in an uncertain and complex world, we look towards our defence industries to provide us with the solutions to meet the needs of our forces. In the past few years, numerous initiatives have been taken and various schemes have been launched to energize the defence sector in India. And therefore we remain deeply committed to the ethos of indigenisation,” Rawat said.

Elaborating on the Make in India initiative of the Centre, General Rawat said it will be taken forward with the defence corridors that are being set up with a bouquet of advantages in the form of ease of land clearances, tax concessions and other issues.

“The strategic partnership model, for example, gives stability and assurance to Indian original equipment manufacturers in the creation of world-class defence products. Even as I speak, we are trying to lower bureaucratic barriers further by reducing processes. We are placing a huge premium on transparency,” he said.

At the conclave, the industries were assured of all assistance in their endeavours from the country’s extensive military cooperation network in consultation with the ministries.

General Rawat assured that the Army Design Bureau, a facilitator for research and development efforts and initiation of procurements of weapons and equipment required by the Indian Army, will facilitate all stakeholders to energise defence production.

“In a globalised world, in order to confront emerging threats it will also be wise to strengthen the paradigm of shared responsibility for defence preparedness,” added Rawat.

Navy Chief Admiral Karambir Singh said that the maritime defence service is committed to regional co-operation in accordance with the policies of the government.

“The Navy stands on the basic principles of helping build self-sufficiency and confidence among partners, respect for national and international law, collective military competence by learning from best practices of other nations and strengthening co-operative mechanisms,” Admiral Singh said.

He also said the navy follows the policies of the government under the ”Sagar” (Security and Growth for All) doctrine.

“We are enhancing co-operation and engagements through the five S”s, that is, Samman (Honour), Samvad (Dialogue), Sahyog (Co-operation), Shanti (Peace) and Samriddhi (Prosperity),” he added.