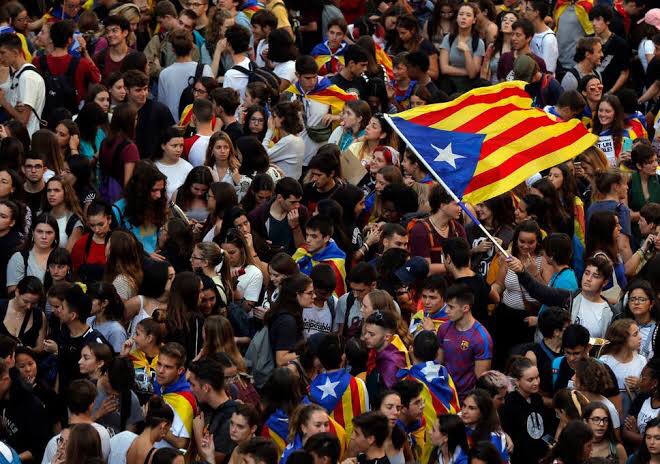 BARCELONA (Reuters) – Hundreds of thousands of demonstrators waving pro-independence flags poured into Barcelona on Friday, the fifth day of sometimes violent protests over the jailing of Catalan separatist leaders.

While the vast majority of the rallies were peaceful, a few hundred masked youths clashed with Spanish police in the heart of the city late in the afternoon, blocking a broad boulevard with burning garbage bins and hurling rocks at the security forces.

Bystanders fled to the safety of shop doorways as police vans tried and failed to clear the road and police in full riot gear fired smoke grenades towards the rioters.

Roads leading into the city were packed as marchers from across the region joined a mass rally against this week’s verdict by Spain’s Supreme Court, which sentenced nine separatists to jail over a failed, 2017 secessionist bid.

The ruling set off the worst sustained street violence Spain has seen in decades, with anger running high in Catalonia. Unions in the wealthy region called for a general strike on Friday and students boycotted classes for a third day running.

The interior ministry has dispatched police reinforcements to the Mediterranean city, which is a major tourist magnet, and warned that troublemakers would be swiftly dealt with.

“Throughout this week, as you well know, there have been violent incidents in Catalonia. They have been organised … by groups who are a minority but are very organised,” Interior Minister Fernando Grande-Marlaska told a news conference. “Their actions, as we have already said, will also not go unpunished.”

Pro-separatists set off on foot from across the region on Wednesday and flowed into Barcelona throughout the day, many with flags draped over their shoulders.

“We have always been peaceful people, but you get to a point where you get treated in such a way that people are getting angry,” said Carlota Llacuna, a 19-year old student from the Maresca region near Barcelona. “They put our leaders in prison.”

One of the main ringleaders, Catalonia’s former chief Carles Puigdemont, has so far escaped trial after he fled to Belgium in 2017 when the independence drive was thwarted.

Spain this week renewed its bid to get him extradited and he was briefly detained by Belgian police on Friday before a judge ordered his release pending a decision on the Spanish arrest warrant. A court is meant to hear the case on Oct. 29.

Several main streets in Barcelona were closed to traffic because of Friday’s marches, while regional trains and the city’s metro were running on a reduced timetable.

Barcelona’s main landmark, the multi-spired Sagrada Familia cathedral designed by Antoni Gaudi, was closed due to the protests, an official told Reuters.

The Spanish soccer federation (RFEF) said in a statement on that Barcelona’s Oct. 26 home match against Real Madrid, which is known as “el clasico” and is one of the biggest rivalries in world sport, had been postponed due to security concerns.

Barcelona town hall said 700 garbage containers had been set ablaze since protests began on Monday and estimated that the city had suffered damage totalling more than 1.5 million euros ($1.67 million).

In an apparent effort to hamper the protesters, a Spanish judge ordered on Friday the closure of web pages linked to a pro-independence group, Democratic Tsunami, which has been deftly directing its followers to various demonstrations.

However, as soon as its site was shuttered, the group migrated its homepage to a new url, sidestepping the ruling.

Democratic Tsunami is a new, secretive group that emerged in September and has drawn thousands of followers on both its website and social media.

Although it says it is committed to non-violent protests, many young demonstrators have battled police over the past three nights in Barcelona in scenes reminiscent of the some of the urban unrest that has rocked France over the past year.

Catalonia is a semi-autonomous region with some 7.5 million inhabitants, who have their own language, parliament and flag. It is Spain’s wealthiest region.

Independence is a highly divisive issue, with a poll in July showing backing for secession in the region at its lowest level in two years, with 48.3% of people against and 44% in favour.