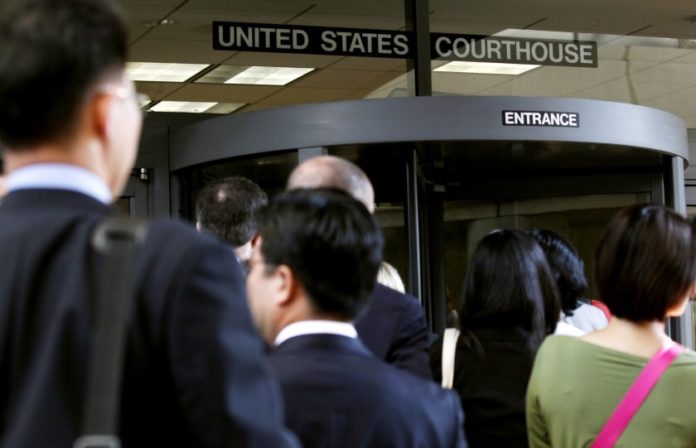 U.S. prosecutors say Hao Zhang is a professor-spy who conspired with a colleague from USC to steal and sell American secrets to the Chinese government and military through a shell company in the Cayman Islands.

Zhang’s lawyers will try to show at a trial set for Wednesday in San Jose that his work at one of China’s most prestigious technical universities to develop radio-filtering technology used in mobile phones has always been about advancing scientific knowledge — and not for the benefit of the Chinese state.

The trial comes amid an aggressive U.S. crackdown on Chinese theft of intellectual property that began under President Obama — even before Zhang was arrested in 2015 when he flew to Los Angeles to attend a conference — and has escalated during the Trump administration’s trade war with China.

Zhang could face a lengthy prison term in the U.S. if found guilty of trade-secret theft and an even more serious charge, economic espionage. Such cases rarely go to trial, but Zhang’s is even more unusual because he has elected to defend himself before a judge in federal court instead of in front of a jury.

The proceeding will last just one or two days, streamlined by the professor’s agreement not to fight evidence weighing against him that a federal prosecutor has described as “overwhelming.”

Zhang is mounting what one legal expert calls a “damage control” defense in which he has conceded evidence including emails that the U.S. says contained trade-secret data and admissions he made while being questioned by the FBI.

“It’s pretty common to only contest elements that are reasonably defensible, to avoid inflammatory or prejudicial evidence coming in on other elements that you are going to lose anyway, but which could color the rest of the case,” said Paul Chan, a lawyer who defends companies and individuals in trade-secret cases.

The secrets Zhang is accused of stealing came from a former employer, Skyworks Solutions Inc., based in Woburn, Mass., and San Jose-based Avago Technologies Ltd., which acquired Broadcom Inc. in 2015. The technology at issue filters out unwanted signals in mobile phones and other devices, which has become more difficult as wireless products have become ubiquitous.

Zhang went to work for Skyworks after earning his doctorate in electrical engineering at USC in 2006. At USC he met Wei Pang, who went on to work at Avago and, according to prosecutors, was Zhang’s key co-conspirator. Both men returned to China to teach at Tianjin University, a premier technical school.

There, the professors used stolen information to refine radio-filter technology, apply for patents in the U.S. and China, and sell it through a company incorporated in the Cayman Islands, prosecutors allege.

In 2015, prosecutor Matthew Parrella told the court that the U.S. has built an “overwhelming case” against Zhang based on email messages with Pang, in some instances containing proprietary information from Skyworks and Avago.

The government has proof of “overt act after overt act of this defendant emailing around trade secrets that he took, attempts to hide their business dealings, attempts to move the victim companies to China — it’s extremely clear,” Parrella said.

Zhang is the first of six defendants to go to trial — and probably the only one because the others are in China. U.S. District Judge Edward Davila has yet to rule on whether Zhang’s mentor at USC, professor Eun Sok Kim, can testify about what Zhang’s lawyers call a practice at the school’s laboratory of promoting a “free and open exchange of ideas.”

Zhang “may be seeking to prove that, given the USC lab’s promotion of the ‘free and open exchange of ideas,’ he had no actual intent to benefit a foreign government,” Chan said. Prosecutors must prove the benefit to get enhanced penalties and fines under the economic espionage charge, he said.

Prosecutors have objected to the proposed testimony but apparently haven’t objected to Zhang’s request that Kim also serve as a character witness. The professor has testified once before, in 2015 shortly after Zhang was arrested, to vouch for his former student’s release on bail.

Kim said Zhang was a “reliable, conscientious person who never showed any sign of a deception.”

“He worked with me for four years as he pursued his Ph.D., so I know him quite well, on his personal integrity and his work ethics and his disposition and life objectives — at least as far as I can tell while he was a student with me,” he said. “So I had a pretty good opinion about him.”

China’s Global Times daily newspaper has published numerous stories describing the plight of Chinese scientists, including Zhang, whose careers it says have been destroyed by U.S. prosecutions.

“America has a long history of hunting for Chinese scapegoats as part of their efforts to curb China’s scientific and technological development,” the English-language newspaper said in a December article.